Review: DOMINION: Prequel to THE EXORCIST: The Truth Behind The Scary Production of A Unique Horror Film

The Exorcist series has proven to be fascinating over the past 30 years or so. The original, released in 1973 changed cinema and horror movies forever. The sequel Exorcist II: The Heretic, released in 1977, was a polarizing, controversial film, while Exorcist III: Legion, released in 1990, was a flawed masterpiece that took the series in a different direction.

And now we come to the prequels Exorcist: The Beginning and Dominion: Prequel to The Exorcist, both produced in 2004.

But the making of both of these prequels is a tremendous story in itself. Dominion was supposed to be directed by John Frankenheimer, who actually started to direct the picture, when he fell gravely ill and left the production. Paul Schrader, the brilliant, always controversial filmmaker stepped in to complete the film, only to be fired after submitting his final cut to producers. The producers than hired Renny Harlin to re-shoot almost the entire film with the same crew and basically the same cast, and the result was Exorcist: The Beginning, released in 2004.

But Exorcist: The Beginning was a critical and financial failure, and Morgan Creek, the production company behind the whole debacle, decided to bring back Schrader to finish editing his version, giving him very little money to complete the post-production process. Schrader’s version finally saw the light of day in 2005 as Dominion.

So, after all this trouble, which version of the film is better? Surprisingly, the answer to that question isn’t that easy to come by. On the one hand, Renny Harlin’s Exorcist: The Beginning is seemingly much more commercial, with a lot more bells and whistles, and the cinematography by Vittorio Storaro is nothing short of sumptuous. One goes in expecting a crass, mind-numbing commercial horror movie, and what one gets (with the exception of the hysterical exorcism sequence near the end of the film) is a relatively subdued, polished and compelling supernatural thriller.

Paul Schrader’s Dominion is a completely different creation. It is not a horror film by any means, there are no bells and whistles (which is understandable, since Schrader was given very little time and money to complete post-production) and the special effects are kept to a minimum. But these are the same factors that make Dominion such a compelling film. With emphasis on mood, long master shots, and nuanced performances, this is a slow, hypnotic and strange psychological thriller.

In terms of how it fares compared to the other films in the series, Dominion is somewhere between an art film and the metaphysical musings of Exorcist II.

So, which version is better? Arguably, both versions, Exorcist: The Beginning and Dominion, have merit. But Dominion is much more haunting, and, therefore, more memorable. 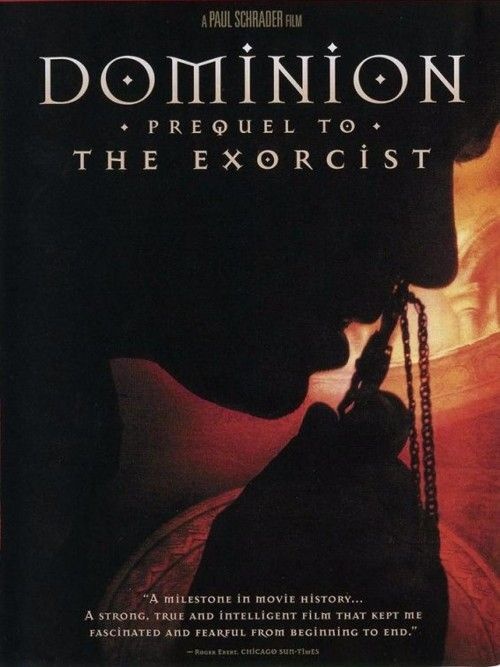