Exorcist II: The Heretic (1977) has to be one of the most hated sequels of all time. Lambasted by critics, mostly reviled by audiences throughout the years, Exorcist II  has become a legend, for all the wrong reasons.

But is it really that bad? Is it a disposable piece of horror cinema that is best left unwatched, forgotten, and ridiculed by high-brow critics and low-brow mass audiences alike?

The answer, in my humble opinion, is NO.

Exorcist II  has many problems, yes. Linda Blair’s performance is amateurish and light, weakening the structure and tone of the film considerably. Blair was terrific in the original, delivering a knock-out performance of the possessed Regan; a performance that haunted and traumatized a generation. But here she is seemingly incapable of carrying the dramatic weight and handling the lead role.

As for Richard Burton, whose performances in the 1970’s left a lot to be desired, doesn’t fare too well in the first half of the film.

The contemporary (that is to say, dated) production design and the film’s rich cinematography also jar the senses. Especially when compared to the natural, cold look of the original.

So, with all these faults, what merits does this sequel have, then?

Plenty, as a matter of fact. Burton’s performance may be bland and workman-like in the first half, but come the second half, his impassioned, emphatic performance packs a wallop, elevating the sometimes confused and confusing script above its defects.

Also, the sequences in Africa are visually magnificent, dreamy, and riveting. And it is in these sequences that the script and the direction by John Boorman come to life. With the eerie sound effects and the stunningly lush lighting and set design, it is in these moments that Exorcist II  shines.

The ending, although slightly overblown and featuring a couple of cringe-worthy moments, is effective, haunting, and unexpected.

Unlike the harrowing original, which focuses on lost souls and the harshness of this life and the ambiguity associated with the next, Exorcist II is a somewhat gentle film, with a bittersweet, elegiac feel, with the story focusing more on redemption and the power of the soul, than demons and possession. And that contrast between approaches and messages must have been absolutely infuriating for audiences when Exorcist II  first came out in theaters. People went in expecting a visceral, gruesome horror ride, and got a slow, talky metaphysical thriller with little bloodshed.

But Exorcist II: The Heretic deserves a little better. It deserves a chance to be viewed for what it really is: a flawed, uneven piece of work, with plenty to offer in terms of ideas and ambition. 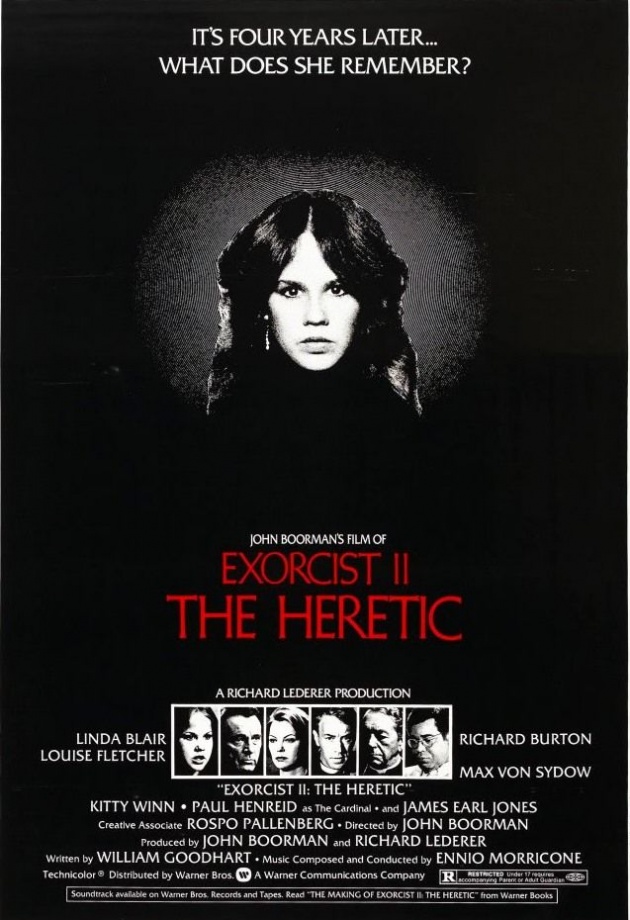