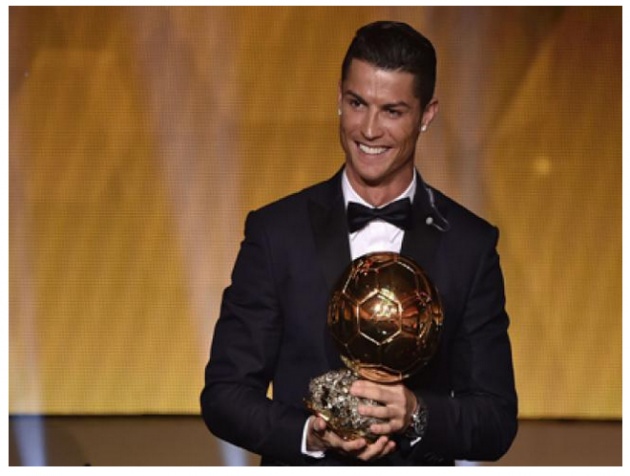 The 29-year-old forward -- who played a key role in Real Madrid's charge to a 10th Champions League trophy -- beat four-time winner Messi to the Ballon d'Or for the second year in a row. Germany's World Cup winning goalkeeper Manuel Neuer came third in the vote.

Ronaldo was the star of a glittering FIFA awards ceremony in Zurich at which Real Madrid teammate James Rodriguez won the goal of the year award and Germany's Joachim Loew was declared coach of the year.

"I never thought I would win this trophy on three occasions," Ronaldo said in his victory speech, signalling there would be no let-up in his quest for football glory.

"I want to be one of the greatest players of all time and of course this requires a lot of effort," added the striker, who won the award for the first time while at Manchester United in 2008.

Ronaldo, whose son and mother were present, burst into tears when he went up to collect the award before praising his team-mates and paying homage to his family.

"I would like to thank my mother, to my father, who is in heaven and who is looking down on me, to my family," said Ronaldo.

"It has been an unforgettable year and to win a trophy of this importance is unimaginable."

The Portuguese then took to Twitter to express his joy.

"2014 was full of incredible moments. Thank you all!" he tweeted.

Ronaldo led Real Madrid to their 10th European Champions League crown -- their first in 12 years -- in sensational style in 2014, smashing Messi's record of 15 Champions League goals in a single season with 17 in just 11 appearances.

The only real disappointment for him was that a knee injury contributed to an underwhelming World Cup for the Portugal captain.

Ronaldo cruised to Ballon d'Or victory with 37.66% of the votes garnered from the 181 national team coaches, 182 national team captains, and 181 media representatives who voted. Messi finished second with 15.76% and Neuer was just adrift of the Argentinian with 15.72%.

His victory was greeted with joy in Portugal with both the president and the prime minister expressing their delight.

"This trophy is recognition of your superb sporting ability, of your determination and of your dedication which has been a feature of your footballing career," wrote Portugal President Anibal Cavaco Silva on the presidential website.

Portugal coach Fernando Santos congratulated Ronaldo but added he would like to play a role in filling out the superstar's medal-filled cabinet.

"Cristiano has already said that what is missing from his brilliant career is to win something with the national team," said Santos, who took over from Paulo Bento after Portugal lost 1-0 to Albania in their opening Euro 2016 qualifier.

"We will do all we can to make this happen."

'Icing on the cake'

Loew, who moved up from assistant coach to the top job after the 2006 World Cup which Germany hosted, said that his award rounded off a sensational year.

Loew won the award with 36.23% of all votes. Real Madrid's Italian coach Carlo Ancelotti was second with 22.06% and Atletico Madrid's Diego Simeone third (19.02%), after an extraordinary season in which the Argentine led Atletico to the Spanish title, ahead of Real and Barca, and also to the Champions League final.

Rodriguez's sublime volley for Colombia against Uruguay in their last 16 match at the World Cup was a worthy winner for goal of the year voted on by the public.

The 23-year-old -- who was outstanding as Colombia reached the quarter-finals only to lose to Brazil -- came out ahead of Robin van Persie's header at full stretch against Spain in the World Cup final group game against Spain, and surprise finalist Stephanie Roche of Ireland.

Rodriguez, who earned a big-money move to Real Madrid on the back of his performances at the World Cup, said: "It is a very special goal for me and for all of Colombia. These are words of happiness and gratitude."