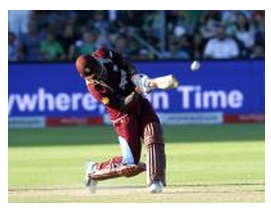 A thrilling burst of hitting by Andre Russell carried the West Indies to a one-wicket win over South Africa in the fourth one-day international at St George’s Park on Sunday.

Half-centuries by Marlon Samuels, Darren Sammy and Russell trumped a maiden international century by South Africa’s David Miller as the tourists chased down a victory target of 263 with nine balls to spare.

The West Indies gained their first win in the five-match series after they several times looked doomed to defeat.

They lost their first five wickets for 73 runs against what effectively was a second string South African attack before Samuels (68) and Sammy (51) put on 93 for the sixth wicket.

But South Africa were favourites again when both partners were out with 74 needed off 64 balls with only three wickets standing.

Russell was striking the ball well but skipper Jason Holder was caught off a full toss and Carlos Brathwaite was run out off the first ball of the 48th over to leave the tourists needing 24 off 17 balls with the last man at the wicket.

Sheldon Cottrell was able to steal a single and Russell hit sixes off the next two balls from left-arm spinner Aaron Phangiso, then was able to get the strike to hit a four and a six off Kyle Abbott to finish the match.

He made 64 not out off 40 balls with five fours and five sixes.

“It means a lot,” said Holder. “We have had a tough tour, so to get across the line in this match is very special.”

It was a cruel result for the left-handed Miller, who made 130 not out and was responsible for a run-out and a leaping catch.

Miller came in with his side struggling at 32 for three in the seventh over. It became 76 for four when captain AB de Villiers was out for 19.

JP Duminy helped Miller add 90 for the fifth wicket but it was hard going for South Africa against a much-improved West Indian bowling performance on a slow pitch which offered some seam movement.

Renowned for his big hitting at the end of an innings, Miller showed he could play a long, responsible innings as he reached his century off 122 balls with nine fours before launching an assault in which he added two more fours and three sixes off the last 11 balls he faced before the innings came to an end.

South Africa rested first-choice bowlers Dale Steyn, Vernon Philander and Imran Tahir to give their other World Cup squad members an opportunity, but they could not halt the West Indian late charge.

“We bowled some bad balls at the wrong time,” said De Villiers.

The final match of the series is on Wednesday at Centurion.