In 1911 a scientist Rutherford performed an gave an atomic model in which he discovered Nucleus of an atom .Therefore he is known as  “Father of Nucleus”

Rutherford bombarded a large number of Alpha particles from a radio active material on a thin gold foil. Alpha particles are double positively charged particle having two protons and two neutrons. He placed a screen behind the gold foil sheet to observe scattering of alpha particles. 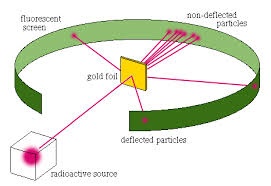 OBSERVATIONS: By placing the detecting screen at different angles he observed that:

1. Most of the alpha particles were undeflected.

2. Some were deflected at large angle.

3. A few particles bounced back.

He concluded that most of the space in an atom is empty because Most of the alpha particles were undeflected.

From the deflection of Alpha particle he concluded that there is a dense portion in the center of atom called Nucleus. 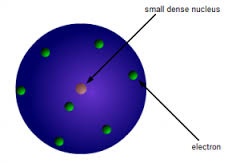 3. Size of the Nucleus is very small as compared to size of an atom.

4. Mass of an atom is because of mass of Nucleus.

5.Negatively charged particle Electrons revolves around the nucleus as planets revolve around the sun. 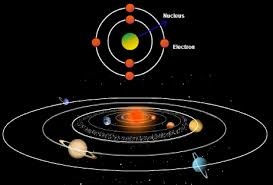 DRAW BACKS / FAILURE : Although he discovered Nucleus but there are short comings in his atomic model . 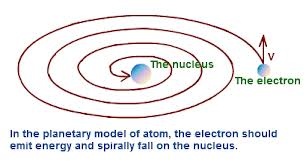 SPECTRUM : According to this model electrons revolves continuously spectrum should be continuous spectrum but actually it gives line spectrum.