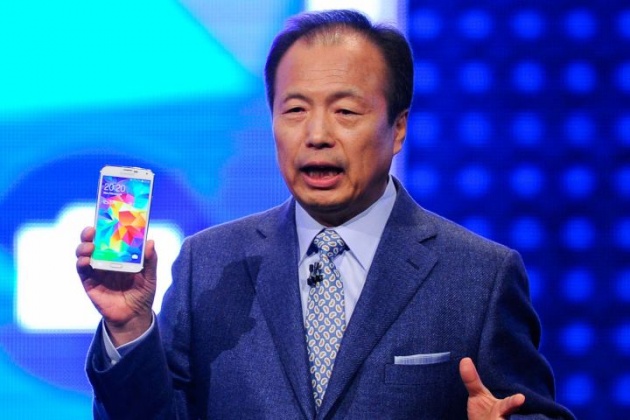 Today at the Mobile World Congress wireless show in Barcelona, Samsung unveiled its latest flagship Android smartphone, the Galaxy S5. Samsung mobile honcho J.K. Shin opened the presentation by saying his company asked customers what they most wanted in a phone. The answers boiled down to a desire for simplicity, nice design, fitness features, long battery life and a good camera.

The phone sports a 5.1-inch OLED display – ever so slightly larger than the S4′s 5-inch display; the screen’s resolution remains unchanged at 1080p. Samsung has infused a couple of neat environment-specific features, such as the ability for the display to adjust its levels relative to your surrounding lighting conditions (indoors or outdoors, for example) and an extra low dimming mode for use in dark rooms or if you don’t want people looking at your screen from over your shoulder.

Samsung promises up to 10 hours of web surfing over an LTE cellular connection, or up to 12 hours of video playback. There’s a new “ultra power saving” mode that will shut down all but the most essential features and turn the screen to black and white, so when you’re just about out of juice, you’ll be able to squeak out enough usage to communicate in an emergency. Samsung says you’ll get up to 24 hours of usage with 10% of your battery left.

The rear-facing camera gets a slight bump, jumping to 16 megapixels (up from 13 in last year’s model). Autofocus speed has been increased, and the actual image sensor is larger than the S4′s; it’s been paired with an image processing chip as well, and it’s capable of shooting 4K video. There’s also a “selective focus” feature that lets you finesse which areas of a photo receive more focus and which are blurred more for a DSLR-like look. Finally, there’s a real-time high dynamic range (HDR) mode that’ll let you preview what an HDR-enhanced photo would look like next to a non-HDR version of the same photo.

“Aluminum? Finally aluminum?!” Sorry. No aluminum here this time around. The case is still polycarbonate – a fancy word for plastic. There’s a perforated back, though, which looks somewhat similar to the Galaxy Note 3. Color options include black, blue, white and gold. 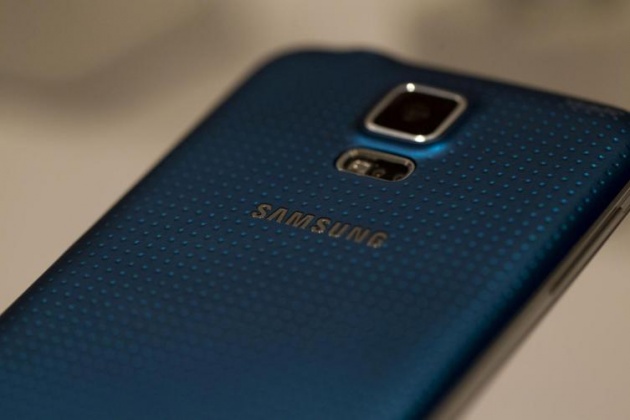 The phone is also water- and dust-resistant. Samsung says you can watch videos in the tub, for instance, but that you shouldn’t submerge the phone underwater. Tough but fair.

On the back of the phone, right under the camera sensor, there’s an integrated heart-rate monitor — the first of its kind in a smartphone. Hold your finger against the monitor and it’ll tell you your pulse.

The Galaxy S5 sports fifth-generation Wi-Fi (a first for smartphones, says Samsung) that can be paired with the LTE cellular connection to accelerate overall download speeds.

There’s an integrated fingerprint scanner appears on-screen above the home button. You’ll have to actually swipe your finger, so it’s different from Apple’s TouchID sensor. You can use the sensor to unlock the phone, log in to a handful of apps (such as PayPal), and to protect certain files and settings on the phone from others.

The modifications made to stock Android (it’s running the latest version, 4.4.2 — Kit Kat) look flatter and somewhat less overwhelming than past efforts, with a thin, modern font and simple graphic app circles. Things generally look more grown-up than in past years. Not too grown up, though. It looks fun but not hokey.

Samsung didn’t really touch on the Galaxy S5′s processor during its MWC presentation, so it’s likely that horsepower might vary by market: some phones might ship with Samsung’s own Exynos chips, while others might ship with Qualcomm’s Snapdragon chips, for example. We’ll see 16- and 32-gigabyte storage options, but the amount of RAM hasn’t been revealed (it’s believed to be three gigabytes). We’ll know more once we get closer to launch.

Speaking of a launch date…

The Samsung Galaxy S5 will be available starting April 11 in 150 countries. No word on pricing, but here in the U.S., it wouldn’t be unreasonable to expect the phone to start around $200 with a two-year contract and to be available on all major carriers.