Humans are curious by nature. And now that we are at the golden age of the internet, the digital world has also become the place to go when looking for what's new. Thus, a breeding ground of the latest trends or what’s in. It's also the modern and best place for brands to advertise their products and services as most people use internet more than television nowadays.

People have this social anxiety called fear of missing out (FOMO). They are afraid of being left out, and so they tend to cling to have or do what’s in to be in, because you know…you only live once (YOLO)! Last year, there is this noodles that took the internet and people around the world by storm. It’s the Samyang Hot Chicklen Flavor Ramen and a lot of people accepted to do the Spicy Noodle Challenge.

Honestly, I don’t care about this spicy noodles. But while we were at the grocery last month, I saw some of it at the noodles lane so I bought one to try. Will I be able to eat all of it? Will it make me cry? Will I surrender? Read further and you’ll know!

Samyang Foods, Inc. is a food company from South Korea. It was established in 1961 and had contributed to ease the food shortage the country was facing back in those years. This also led to create the Samyang Ramen, which was Korea's first ramen. 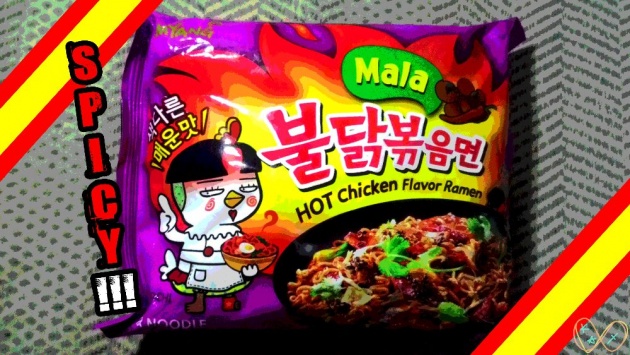 What I bought is the Samyang Hot Chicken Flavor Ramen Mala. Only two kinds of the hot chicken flavor ramen were available at the grocery store where I bought this from, the Mala and the extreme. Back then, all I know is that this noodles have different levels of spiciness but I have no idea which one is spicier than the other. 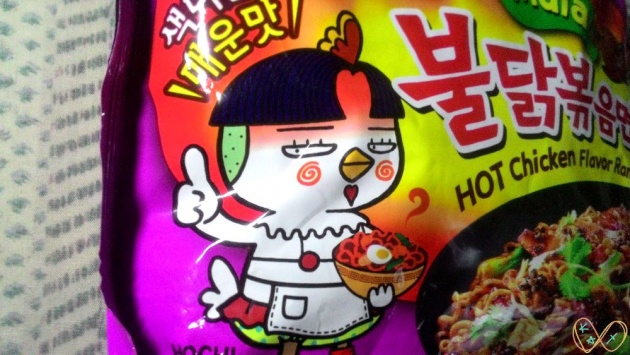 This is a problem, I told myself. I stared between the Mala and the other which says extreme. I kind of had a bad feeling seeing the word "extreme" written on its package, so I just trusted my instinct and went for the Mala. Well, I hoped it's the less spicy one but look at the Hochi, the chicken mascot at the packaging. His forehead is burning red, it's making me nervous.

Mala is a Chinese spicy sauce which main ingredient is the sichuan peppercorn which gives a numbing sensation and spicy flavor.

When I got home, I searched for some reviews about the Hot Chicken Flavor Ramen Mala. I was quite taken aback when I knew that the noodles I bought was 4x spicy. I began to doubt myself if I could even it.

I was nervous. So to lessen it, I watched some videos of people eating the Mala flavor like this video by Ashley. She ate the noodles like it was nothing. Wow! She described that the Mala was less spicy than the 2x with only 2,700 SHU. (This was great news for me!) And so she asked people to stop calling the Mala as 4x.

Meanwhile, here's the most hilarious Spicy Noodle Challenge I've watched so far. This man also ate the Mala Samyang. He was all tough at the beginning, even adding some chili peppers, then devoured the noodles like it has no spiciness on it. Later on, he began to describe the noodles as the devil's food and begged for a glass of cold holy water. It was very hilarious because he was still acting tough while saying it. Where in fact, anyone who was watching the video could tell he was on the verge of surrendering. (Haha!) 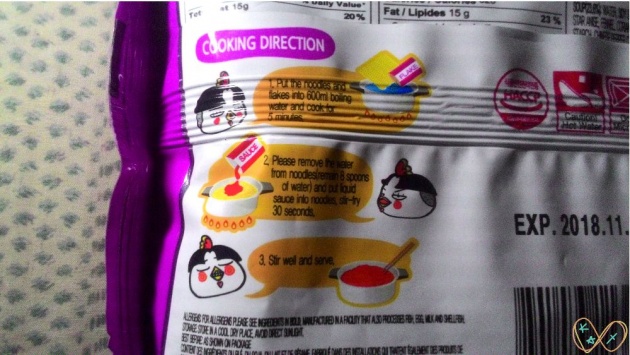 The instruction, ingredients, and nutrition facts about the noodles is found at the back part of the package. It's written in English so following the procedure was easy. 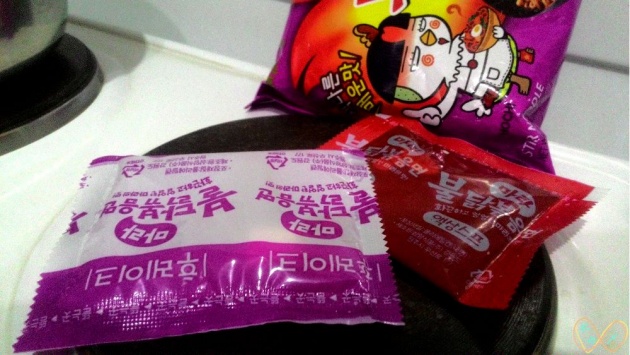 Inside the package are the noodles, flakes, and liquid sauce. The flakes is contained in the white and violet packet, while the spicy sauce is on the red packet. 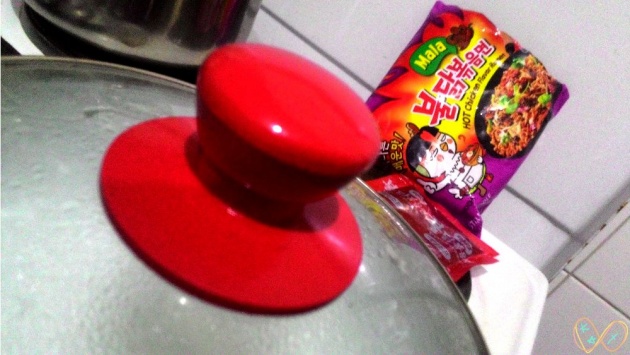 The procedure for cooking the Samyang noodles is just like how you cook regular noodles. Put the noodles and flakes onto the boiling water and wait for 5 minutes. 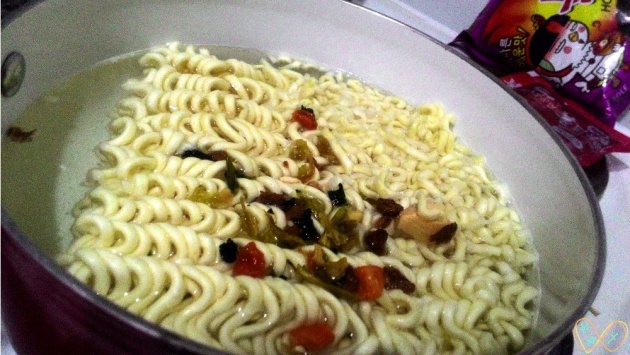 The flakes were dried chops of vegetables which I can't identify what vegetables were those, but I could definitely recognize some carrots and even a few pieces of mushroom.

Then remove the water but leave about 8 spoons of water. Add the spicy sauce then stir-fry for about 30 seconds. And that’s it! You're now ready to burn your mouth! I mean, do the challenge!

The Spicy Noodle Challenge or Fire Noodle Challenge or Samyang Challenge. There are many names for this game, but all of these refer to Samyang's Hot Chicken Flavor Ramen noodles. The mechanics of this game is to challenge friends or families on who can finish up a plate of Samyang noodles the fastest without drinking water or any liquid. The first one to drink loses the game. This is the usual game rules I see, but others put up another challenge before one could get a gulp of his/her drink, like doing a truth or dare. 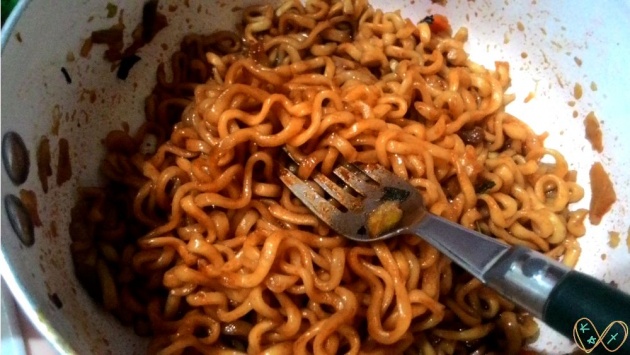 Of course, eating Samyang noodles isn't only for doing the challenge. You can just simply eat it alone at your own pace, just like what I did. (I love myself so I only challenge myself. Just kidding!) It took me about a week before finally having the guts to cook this intriguing noodles. I placed the pot on the table and told everyone to try it. They refused and my mom even made an excuse that she still feels full so she'll just eat later. (Ugh!)

I took a fork, dipped it a bit into the sauce, and took it in my mouth. Yup, it does taste spicy.

TIME TO DIG IN!

The moment of truth!

Securing a glass of water on my side, I then took out a few noodles from the pot into my plate using a chopstick. I twirled the noodles for awhile looking at the red sauce. After gaining courage, I finally took a good amount of noodles into my mouth. By the way, my mom and brother were staring at me while I ate it. My mom asked me if it was spicy, which I didn't answer. I grasped another noodles with my chopsticks and ate for the second time. My brother then said, the Mala couldn't be that spicy because I can handle it. (Yeah, lately I love eating foods with a tinge of spiciness so I wanted to try Samyang's spicy noodles too.)

Well, my first two attempts of eating it was okay, but it gets spicier as you eat more. Slowly, I can feel my lips burning and parts of my chin which the sauce has touched. The spicy feeling was really spicy! Legit! I also felt like there was a sharp pang on my tongue. Maybe this was the numbing effect of the Mala? Sorry, I don't know how to exactly describe it. But I'll say, I haven't tasted any ramen flavor at all on Samyang noodles. It just tasted purely spicy and my mouth was feeling nothing but burning. I finally answered my mom's question earlier and told that it was spicy (while blowing air out of my mouth). She agreed and said it must taste very spicy because my face was already turning red! Thank goodness my brother had already left before my face turned red. You know, I like to appear tough sometimes!

I was still able to handle a few more even without drinking water. But I realized I could no longer tolerate the spiciness when my gums started to sting badly. It was very painful so I finally drank some water. I waited for the pain and spicy taste to subside before I ate again. I repeated this sequence until I ate all of my portion. I ate 5/6 of the noodles and left the 1/6 for my mom to try. And since I was challenging no one, there was no time pressure. Guess how long I finished eating it? (*drum rolls*)

Well, at least I get to finish my portion! Some of the videos I've seen didn't eat everything and just threw the noodles. It's just a mind over matter, friends! And as Confucius says:

"It does not matter how slowly you go as long as you do not stop."

Not eating it is just like wasting your money, right? I took a bath after and when I came out of the bathroom, my mom who was then eating an ice candy met me and said she had already eaten the spicy noodles I left for her. She said it was really spicy but it was nothing because she ate an ice candy right away which overpowered the spicy taste of the noodles. (Lol!) 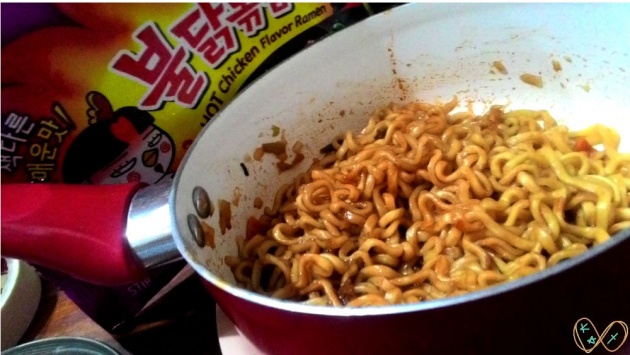 It was an experience to try the Hot Chicken Flavor Ramen Mala but I would definitely not try it again. Not even the other Hot Chicken Flavor Ramen variants. There are things that should only be done once, and I think this should be among my list. I'd rather spend my money for an ice cream than punish myself on a hell-like situation with Samyang's spicy noodles. Trying it once was enough for me. In addition, instant noodles are not good for our health so we should avoid eating it as much as possible.

This just shows that not all the trending stuff we could see over the internet must be tried. But hey, on the brighter side, I was able to write a blog out of it!

Have you tried any of the Samyang spicy/fire noodles? How was it?