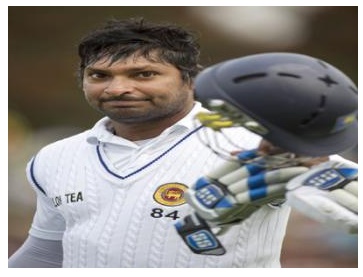 Sri Lankan batsman Kumar Sangakkara joined an elite group of cricketers Saturday when he became only the fifth to make 12,000 runs in his career.

The prolific 37-year-old left-hander reached the milestone when he knocked Trent Boult square for two in Sri Lanka's first innings of the second Test against New Zealand in Wellington.

Sangakkara started the two-Test New Zealand series on 11,988 runs and after scoring six and one in the first Test in Christchurch, he was determined to get the final five in Wellington.

"When he fails, it's a coach's nightmare. You have to throw (balls to Sangakkara) for hours and hours," captain Angelo Mathews said ahead of the Test.

"He's been working really hard in the nets and he's desperate to go out there and get some runs."

Since launching his Test career in 2000, Sangakkara has made an impressive average of over 58.00, including 37 centuries in 130 Tests. His highest score was 319 against Bangladesh.

He is now number four on the all-time scoring list, although his average is higher even than Indian great Sachin Tendulkar, who tops the ranking with 15,921 runs in 200 Tests at 53.78.

Last month, Sangakkara became only the fourth batsman to surpass the 13,000-run mark in one-day internationals, achieving the feat in his 386th match.