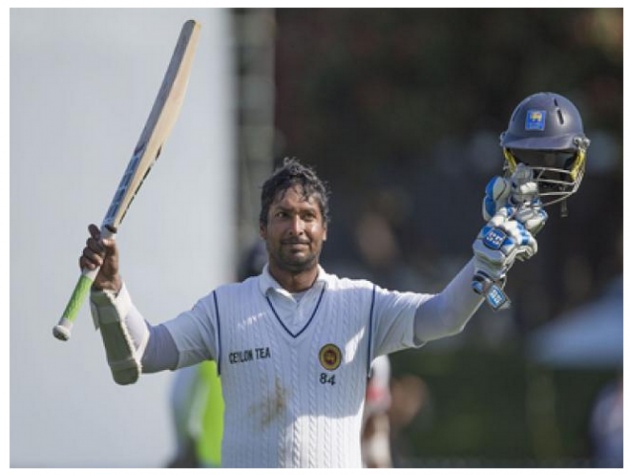 An imperious century by Kumar Sangakkara steered Sri Lanka to a 59-run first innings lead over New Zealand Sunday at tea on day two of the second Test at Wellington's Basin Reserve.

Sangakkara received admirable support from Dinesh Chandimal in a 130-run stand for the sixth wicket.

After a frantic first day in which 15 wickets fell, day two has been dominated by the bat.

Sangakkara and Chandimal stubbornly shut out the New Zealand bowlers for three hours until Jimmy Neesham made the breakthrough an hour after lunch, inducing an edge from Chandimal which wicketkeeper BJ Watling snapped up.

Chandimal, who was omitted from the first Test line-up, celebrated his recall with a vital 67 after going to the wicket at the start of the day with Sri Lanka at a perilous 78 for five.

Sangakkara, who on day one became only the fifth player to reach 12,000 Test runs, patiently defied the New Zealand bowlers as Sri Lanka fought to square the two-Test series after losing the first match by eight wickets in Christchurch.

Dhammika Prasad played a brief cameo after the fall of Chandimal's wicket.

He had a life on four when Brendon McCullum dropped a simple chance at mid-off and added a further seven runs before he too edged a Neesham delivery to be caught by Watling.

It continued a disappointing Test for McCullum on his return to the ground where he scored a New Zealand record 302 in his last appearance against India in February last year.

He lost the toss and was forced to bat when he wanted to bowl, was out for a two-ball duck and spilled one of the rare chances Sri Lanka have offered on the second day.

Neesham was the only successful bowler with two for 38 while Doug Bracewell was unable to add to the three wickets he took on the first day.