The premise might paint an idea of the story and controlling idea may suggest either an idealistic plot (positive ending), pessimistic plot (negatively ending) or a ironic plot (both positive and negative ending), but neither necessarily spell out the genre.

In the 300’s BC, Aristotle’s dramatic theories on genre narrowed it down to just four types: Simple fortunate, simple tragic, complex fortunate and complex tragic. Complex meaning the climax makes a significant change to the protagonists life. These days there’s mockumentary, horror and science fiction, perhaps all three in one film. A whole catalogue of genre’s are in the vocabulary of the audience, so knowing the genre of the screenplay not only identifies your audience, but allows you to make vital decisions when plotting out your scenes. Is the comedy I’m writing funny? Is the horror film scary?  Perhaps the lines of several genre blurs comfortably into one, as many films do.

The writers of the books I’ve been reading (Robert McKee ‘Story’ and Blake Snyder ‘Save the Cat’) have different methods of narrowing it down to a digestible level. In this blog, I would like to explain Robert McKee’s story triangle. In his book ‘Story’ he goes into detail about the many genres, but I think it’s interesting to look at how he separates movies in terms of plot structure. 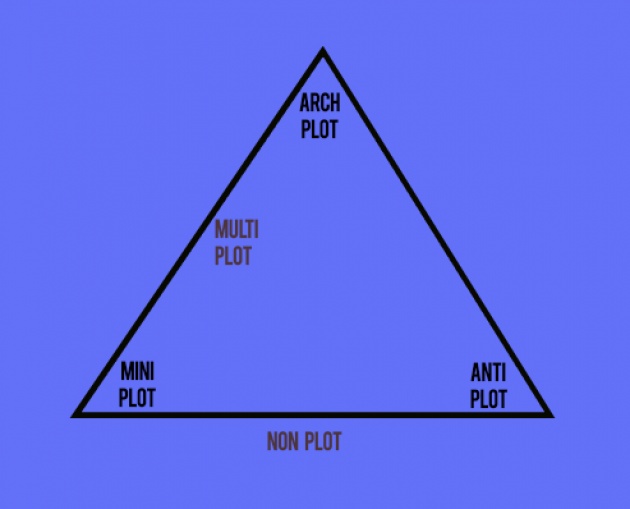 Films placed in Robert McKee's 'Story Triangle' don't reside pinned to one end of the triangle, McKee places 'Barton Fink' in the middle for example, as it contains elements of all plot types within the triangle.

Anti Plot (Anti-structure) - The golden rule is to break the rules of the conventions of the arch plot. Reality and time might be inconsistent with moments of coincidence. Example: Un Chein Andalou

Multi Plot - Has a less classical form than an Arch Plot with often an open ending, yet less minimalist and insular than Mini Plot. Example: Parenthood

Non Plot - The protagonist makes no positive or negative change. The film dissolves into portraiture and therefore is not a story as such. Hence why it resides outside of the story triangle. Example: Leaving Las Vegas.

Although McKee has concluded these plot types by referring to movies from the lengthy history of cinema, the most important plot structure for anyone learning the craft of screen writing is the Arch Plot (Pronounced 'Arc). This classical design compensates for most of the films we see and communicates on a global level, drawing a bigger audience. When you tell a real life story to a friend, wherever you’re from, you will tell them in a classical form. The writers who have stretched out to the other plot types have first mastered the Arch Plot. There’s precious few established films outside this structure and the film industry finances to get a return from their audience.

In my next blog, I’ll cover genre, or more accurately; Story type. Blake Snyder in his book ‘Save the Cat’ breaks down movies into ten different types of story.