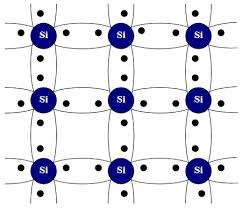 This bond is formed by sharing two electrons, one by each atom (neighboring) in crystal lattice. In atomic structure of Silicon there are 14 electrons according to Bohr’s Model of atom. In outermost shell there are four electrons, this is also the case with Germanium So these elements are tetravalent.

Every atoms of Silicon Share all its 4 electrons with neighboring atoms of lattice.

At room temperature,In covalent bonding, the valence shell of each atom, in solid silicon appears to be filled and consequently there are no holes and no free electrons available for conduction, due to low ionization potential. That’s why, semiconductors are insulator at room temperature.

Difference Between Semiconductors and Conductors:

Due to this semiconductors have negative temperature coefficient.

Semiconductor in pure form is intrinsic and has low level of doping. In this form it is insulator. 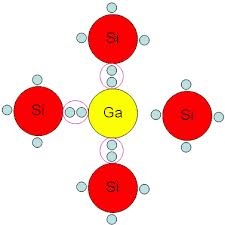 In diodes, in N-type Material, that formed by tetravalent atoms thus outermost five electrons form them one electron from each atom is set free and has high ionization potential, electrons are in majority and holes are in minority.

In P-Type Materials, trivalent atoms, 3 electrons of these atoms form covalent bond with 3 electrons of semiconductor leaving behind a hole to be filled by an electron, so we say that holes are in majority in P-Type and electrons are minority carriers. 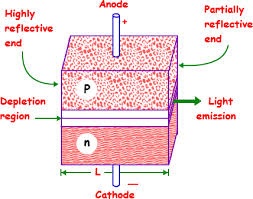 So, electrons move in P-Type material leaving behind Positive ions in N-Type and as holes are taking these electrons so a layer of negative ino is accomplished along side the potential barrier.

Testing Diodes and Transistors BACKGROUND One of the nice things about solid-state devices is that, …

Tunnel diode semiconductor diode characterized by a small thickness of the pn junction, a very high…