Big on charity? Love Teddy bears? Feeling like giving something back today? Go to Bears For Humanity. I found these dudes on Twitter and it's the most adorable initiative on the planet. They give Teddy bears out all over the world to orphanages, hospitals, and everywhere you could possibly imagine.

You could buy teddy bears for yourself and a portion of the proceeds will go to a charity of your choice. Don't want to choose? Cool. They'll do it for you. I think. 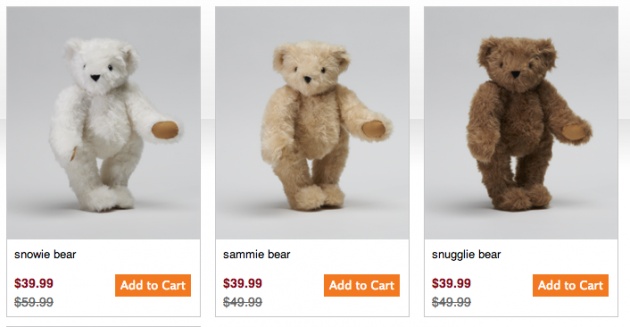 Thinking the bears will be low quality? Not a chance. They are pricey though which could be a turn off, but remember this is for charity. You're getting a bear that means something.

So why do I care about this at all? Teddybears are quite amazing and I think growing up I always had one. It's not so much for the traditional reasons of a stuffed animal, but just kind of comforting to know that there's a symbol to remind you of where you came from. A symbol (hell, I'll say it), a friend that takes you back to places you need to go sometimes. A reminder you're human.

Was that a bit much? Yeah, probably. It's not as simple as you'd think where it's just for kids to sleep with. It's a part of them (or it can grow to be).

So if you're ever thinking of buying a gift for a young kid and that gift happens to be some sort of stuffed animal get a teddybear. And if you can afford it get it from Bears For Humanity.

Because why the hell not.

To serve humanity is to serve God…