Short Filmmakers Are the Winners! 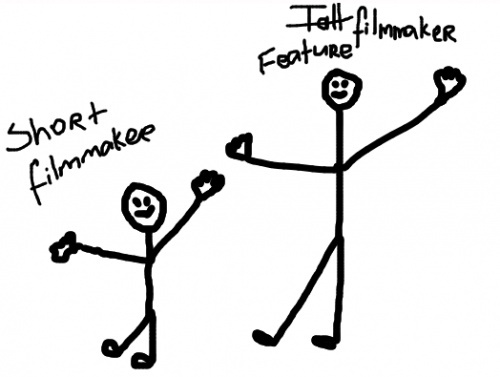 And by short filmmakers, I don't mean filmmakers who are not tall enough... I mean filmmakers who make short films. We have a lot of them on Film Annex, and I feel like over the past years, we have established some pretty strong relationships with them. I can in fact address some of these filmmakers as "friends," and that makes me happy.
Making a feature film is hard; everybody knows that. So most people assume that making short films must be easier. Well, not really. In fact, the art of making short films can be much more challenging compared to that of making features. And the main reason is of course the shorter duration. Whatever story you're trying to tell and whatever message you're trying to get across, you have to do it in less than 25 minutes instead of 90 or more. You have to be articulate, concise, and to the point while maintaining meaning and emotion.
When I first started writing short stories, I always wanted to rush to the end and see the story unfold. But, I had no idea what the story was in the first place, because I had no patience to develop it or really think about it. Slowly, I realized that art in short format also needs patience, organization, dedication, re-writes, and of course, a lot of thinking. Writing an effective short story that influences you can be harder than writing a novel. Making an unforgettable, touching short film can be much more challenging that making a 3-hour epic.
The fact that we embrace short films and the filmmakers who make them here at Film Annex is one of the things that make me really proud to be part of this company and platform. Another is that our filmmakers can actually monetize their shorts and use that money to finance their features. I encourage everybody to watch more short films and read more short stories, because I know that they can make one gain new perspectives, think differently, feel warmth and excitement, and be inspired just like novels and features do.
Lastly, I want to recommend two short films that I really love. One is Francois Truffaut's Love at 20, which he made in 1962. The other one is Rubbish by Amy Allen, shot in the streets of Prague on a super 16mm.
Until next time,
Eren Gulfidan