Dream Works Animation has always produced blockbuster animated movies. Shrek is one of the Dream Works animation movie and today I am going to write a review on Shrek 1. This blog will be very fascinating to you because I am going to tell you the true story of Shrek 1 that what actually had happened. So without wasting any time, let us get started.

This Shrek 1 Dream Works Animation Movie starts with a scene in which Shrek is living in his home and people from the village rushed towards his swamp in search of a monster so that they could kill him. Shrek used to live alone in his swamp and cannot imagine anyone to live beside him so when the villagers came towards his swamp, he scared them and asked them to run away and never come back. The villagers became very frightened on seeing a large ugly Green Ogre so, within no time, they just ran away and Shrek became happy to live alone once again. But his happiness never lived long.

The soldiers of the prince were buying strange animals and things from the people which they had so that the prince could get rid of them and throw them away from the village. A woman came with a talking donkey and tried to sell it to the soldiers but somehow the donkey managed to escape in the woods where he found Shrek who saved him from the soldiers.

The Donkey really felt for Shrek and he decided to live with Shrek no matter how he treats him. Shrek was habitual of living alone and he cannot bear his presence with him so his presence was very disturbing to Shrek but somehow he gave him permission to live in his home for one night. That night became the worse nightmare for Shrek as all the creatures which the prince was buying, he left them in Shrek's swamp and he was not all alone now.

Shrek's Mission To Get his Swamp Back

The mirror showed him three princesses and he selected the third princess whose name was Princess Fiona and she was captured in a far away Island and guarded by a dangerous fire-spitting dragon. The Lord himself was a coward man so he decided to have a tournament where people would fight and the winner would be sent to rescue Princess Fiona from the dragon.

Shrek reached his castle and people started to fight with him. He defeated all of them and Lord decided to make him the winner of the tournament. The clever king made a deal with him that if he rescues his princess then he will give his swamp back clean and clear without any creature in it. Shrek agreed and started his journey for rescuing Princess Fiona. 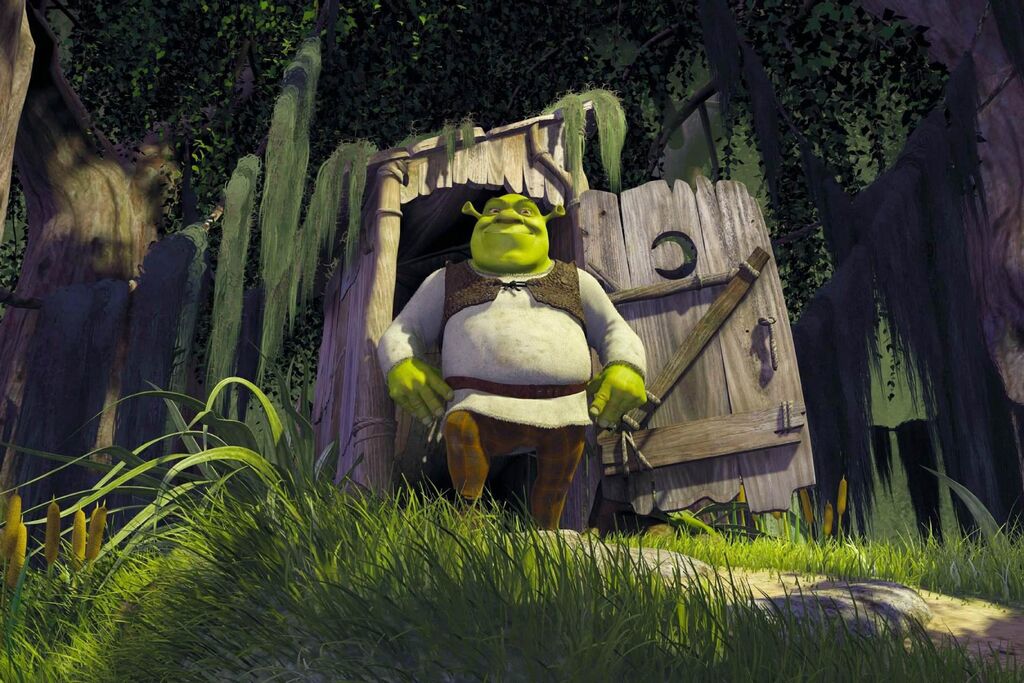 Shrek reached the Island in the company of donkey who talked a lot during the whole journey for rescuing Princess Fiona. Somehow he rescued Princess Fiona and beat the dragon. The dragon really liked donkey and fall in love with him. Actually, the dragon was a female dragon. Princess Fiona was not happy to see an Ogre rescuing her because she was supposed to be rescued by a prince and his true love will end her curse which was put on her.

She was really disappointed because she wanted to be human permanently. She was under a curse in which she became an Ogre after a sunset and remains an Ogre whole night.

Shrek and Princess Fall for each other

During their journey back to the kings land, they both fall in love with each other but they never told one another. Donkey knew that both of them love each other but Princess Fiona forbidden donkey to tell her reality to Shrek who was not telling her that he loves her because of being an Ogre.

Soon they reached Lord Farquaad and the day of marriage came. Shrek and Fiona separated their ways. It was the donkey on the day of marriage who talked and talked with Shrek until he realized to go back and tell her that he loves her so much. So he rushed into the marriage ceremony in front of everyone.

The sun was about to set and Princess Fiona decided to reveal her reality. As soon as the sun went down, she became an Ogre which Lord Farquaad really hated and ordered his men to put the princess back from where she was rescued. His men were holding Shrek and Fiona tightly and they were helpless.

At that moment donkey came to the scene with his dragon wife and rescued them. Finally, Shrek told her that he loves her. They both kissed and she found her true love and become an Ogre permanently for her whole life. Both got married and started to live happily ever after. The official Trailer of Shrek is here

Before leaving, answer to these Querlo Chatbot questions.

Today I bought the shrek stikers set , all the emotions are too cool and i love them all.All the sti…

Get out of ma swamp - Scotland and Protected Accent Status

In two months time, the residents of Scotland will get the opportunity to vote to break away from th…