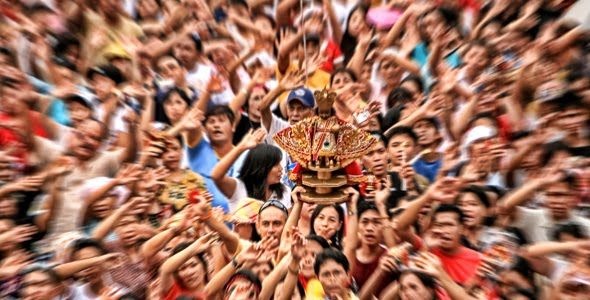 People from all walks of life partakes the grandest mardi gras in Cebu. Holding on their respective image of the Sto. Niño chanting "Pit Senyor" while offering a Sinulog dance with the beat of the drums. Sinulog in English is like "water current movement" that describes the festival dance movement.

On the other hand, "Pit Senyor" means "Sangpit sa Senyor". Sangpit is to call upon and Senyor is an endearment of the Holy Child Jesus in Cebu. Held every third Sunday of January in honor of the Holy Child Jesus -- Sñr. Sto. Niño. A traditional festivity commemorating a centuries-old event and a tradition that Cebuanos have enjoyed up to the moment.

Queen Juana the wife of Raja Humabon accepted the image of Sñr. Sto. Niño from Ferdinand Magellan where he planted the cross and claimed the shores of Cebu in 1521. Magellan offered the Holy Child Jesus as a baptismal gift and while holding the image Queen Juana danced joyfully and that marked the foundation of the Sinulog dance. It was the oldest religious relic in the Philippines kept in Sto. Niño chapel the same image given by Magellan to Queen Juana. Since then the devotion to the Sto. Niño has grown and it was solidly established in the Visayan culture. Pilgrims from the four corners of Cebu as well as the rest of the Philippines made their journey in joining the procession and the festivity.

Salvo comes from a Latin word “salvātŏr”, based on the Latin verb “salvare”, which literally means “the savior, or the one who saves”. 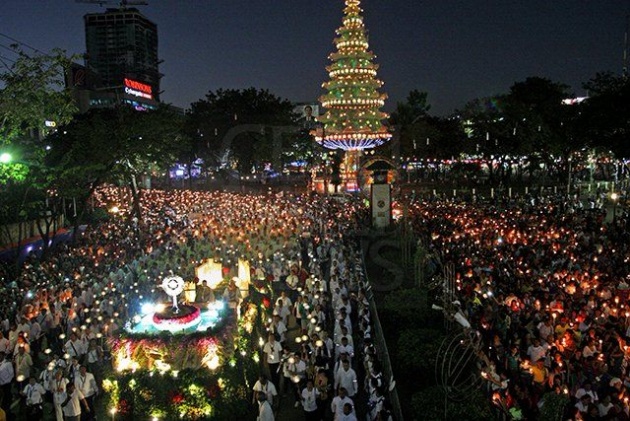 It started off with the Opening Salvo as a kick-off of the religious festivity in Cebu. This Opening Salvo is a dawn procession called "Walk with Jesus" that starts at 4AM. The procession were lined up by thousands of catholics and devotees from Fuente Osmeña (the one with the giant Christmas tree) down to the Basilica Minore del Santo Niño church where a solemn mass will be officiated once the image of the Sñr. Sto. Niño is placed on the altar.

CARROZA ENTERING THE PILGRIM CENTER LEADING TO THE ALTAR 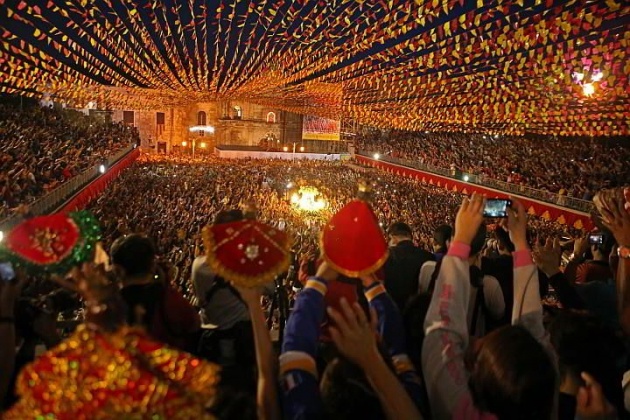 The carroza of the Holy Child at the pilgrim center of the Basilica / Photo Credit: Junjie Mendoza

Inside the pilgrim center of Basilica Minore del Santo Niño are thousands of devotees waving their hands and singing the Bato-balani song as they welcome welcome the carroza with the image of the Holy Child as it lead its way to the altar.

Hermano is an older brother and Hermana is a sister. 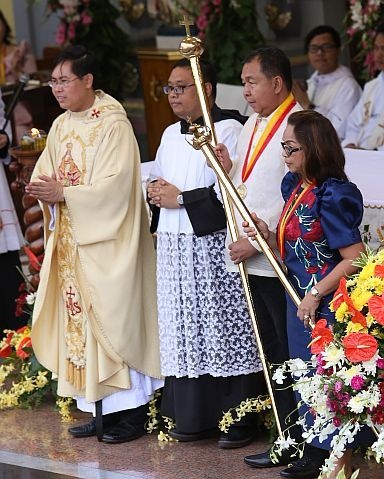 After the solemn mass the announcement of the newly elected Hermano & Hermana Mayores of the year will be presented. For the year 2017, it was Leo Manguilimotan as the new Hermano and his wife Cristina Manguilimotan. The chosen couple are the owners of the franchise chain of Arbee's bakeshop - a well known bakeshop chain in Cebu.

The role of the newly elected Hermano and Hermana is to hosts the entire festivity from the day of their proclamation as Mayores to the 9 day Novena, fluvial parade, procession, street dancing and until the Hubo. Always on stand-by for whatever activity that the Basilica may have.

Novena in the Roman Catholic Church is a form of worship consisting of special prayers or services on nine successive days. 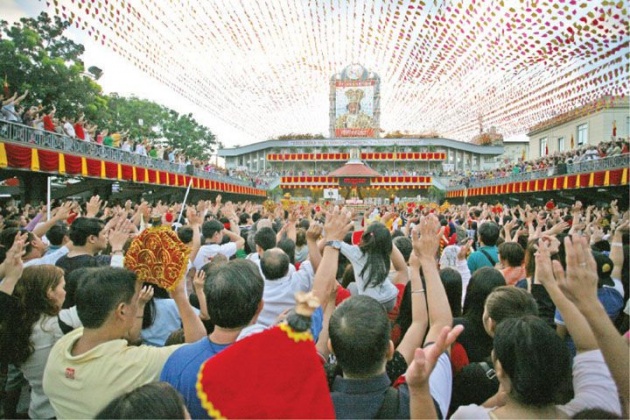 The word Novena was derived from a latin word "novem" which means nine (9). It's a successive nine day period of prayer (it can be for public or private) for petitions, special graces or appealing to special favors and other various reasons for the intended Novena. After the Penitential Walk for Jesus and the official mass held inside the pilgrim is the first day of the nine day Novena. For 2018 Sinulog festival, the first Novena mass is on January 5, 2018 after the Walk with Jesus procession. Each day, there are eleven (11) holy mass schedules.

A religious traditional dawn procession of the Holy Child Jesus together with the image of Nuestra Señora de Guadalupe de Cebu that will traverse the Mactan Channel to visit the National Shrine of St. Joseph in Mandaue City to unite as Holy Family. 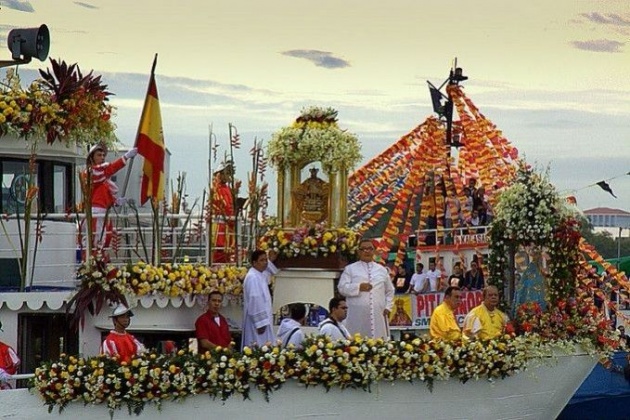 By tradition, the image of Sto. Niño encased in glass and carried by a vessel together with the image of His mother Nuestra Señora de Guadalupe de Cebu will traveres the Mactan Channel to pay a visit to His father St. Joseph in the National Shrine at Mandaue City. Hundreds of small and medium sized boats decorated with yellow and red flowers will be sailing at dawn in participation of this traditional fluvial procession. 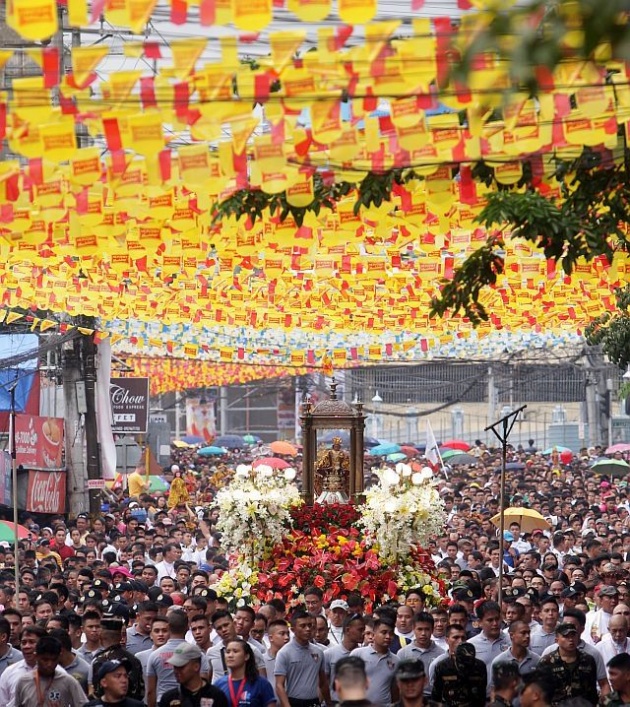 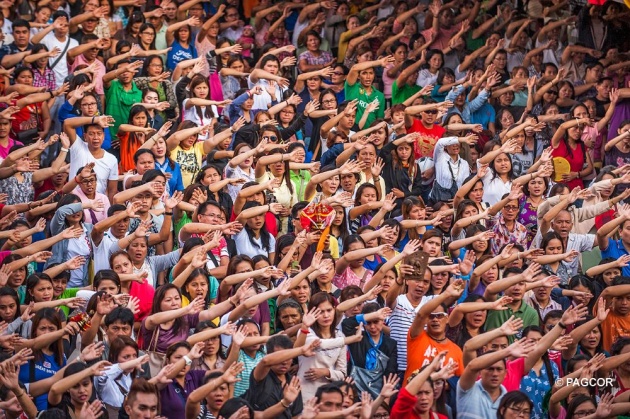 When the carroza is back at the pilgrim center, all the officiating priests and all the devotees inside the pilgrim welcomes the Holy Child by singing "Bato-Balani sa Gugma" (Magnet of Love) and together they raise and wave their hands as a manifestation of surrendering before the Lord. After the mass, there is a Sinulog Dance where every one dance their hearts out as a way of thanking, praying and asking for favors be granted. Right after an one hour of dancing the traditional Sinulog dance, a pyrotechnic display is fired that is witnessed all the locals and tourists inside and outside the pilgrimage.

Street Party - an organized social event for local residents that is held outdoors in a street or other public area. 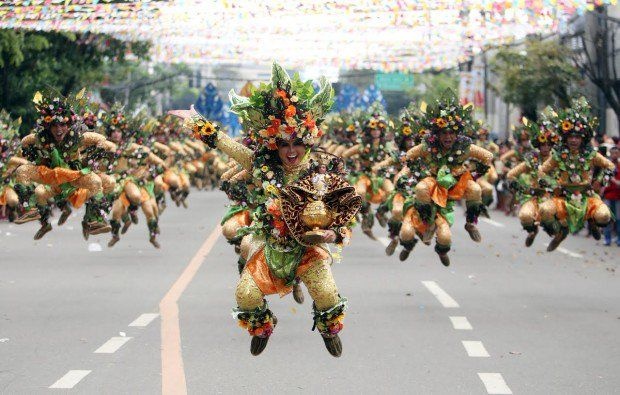 The main highlights of the festival is the grand street parade that lasts for almost 12 hours for the whole day. This parade consists of participants from different towns, cities, provinces of Cebu, Visayas region, Luzon and Mindanao.

These Sinulog contingent dancers are dressed with various colors while dancing gracefully to the beat of the drums, innate gongs and other musical equipment. Locals and tourists flock to the city to join the street dancing party and witness the fireworks demonstration right after the street dancing competition.

ORDER OF DIVESTING THE IMAGE 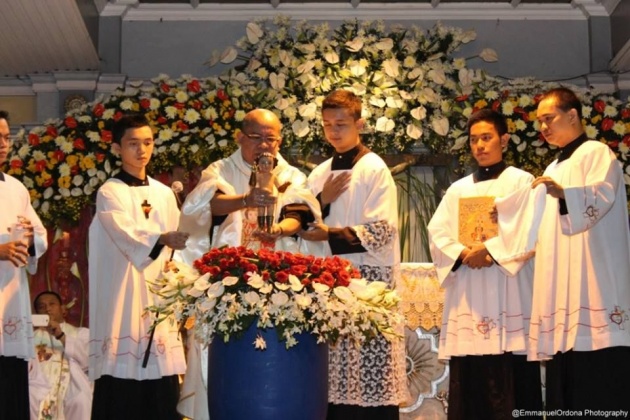 Five days after the Sinulog grand parade a "Hubo" rite is performed. This Hubo symbolizes a spiritual change of a person. It is a ceremony during the mass where the priest remove the festival garments of the image of the Holy Child following the order of divesting the image with a short recital of petition in every removal. Dipping the image into the water laced with perfume symbolizes purification and cleansing to “renew ties with God” and clothe the image into an ordinary vestments. The Hubo mass serves as a closure of the week-long celebration of the festival and a kick-off for the Lenten season as well.

I have been so fortunate everytime this festivity came along. Even when I was still working I am always worried that I might not be able to attend the event but He find ways. It's my grateful way for all the blessings and protection that He bestowed on me and my family. Always been my confidante, protector and forever my "Bato-Balani sa Gugma".

Since Sinulog 2018 is just around the corner so this blog is created and posted by Dimpsy for bitlanders.

Thank you for reading and 'til my next blog.