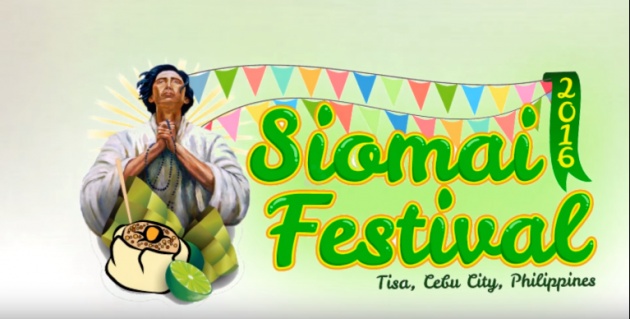 Almost a year ago when my husband James and I moved to our new home which is located in Tisa, Cebu. It is a well known town in the the city of Cebu because of their special steamed pork dumpling locally referred to as "SIOMAI". The town has a specific area in itself where there's an array of restaurants which offers the siomai, some have other varieties of food available while most of them just simply offers the siomai plus the equivalently famous hanging rice of Cebu which is locally called "PUSO".

It is very known that almost all parts of Cebu and the neighboring provinces had imported the idea and had labelled their dumpling as Siomai Sa Tisa. And it is an easy go-to-food specially for the college students. My husband and I also would be eating dumpling if we couldn't find any other food available nearby our village.

How the dumplings, or siomai are served. I am getting hungry right now! Photo credits to www.everythingcebu.com 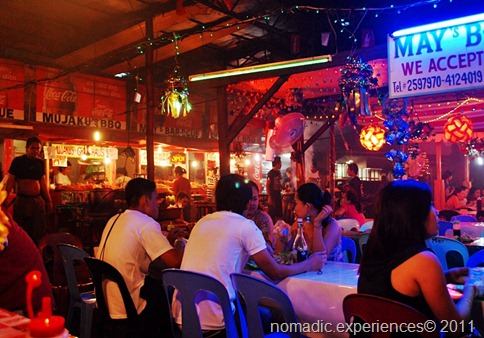 This is how the stalls and tables are arranged, the stores which sells them are just lined up along the streets of Tisa. Photo credits to nomadic experiences

When I was in college, I love to eat it because it is always available and it is at a cheap price where we could just order two pieces of it and that will fit for the entire meal and it makes us full at the same time. I guess it is still a hit for the college students as I can see these kinds of stalls available near college universities in Cebu. Definitely it is one of the most affordable viands a student can find out there.

Of course it is evident that this is originated from China. However, it has been adopted by the Filipino and became one of the common viands that can be found in the streets or even in the restaurants. I had just found out that it is originally called Shumai but in Cebu, we use to call it Siomai, with a different spelling.

It has been known that the original makers of these yummy dumplings was the Julmer Food Ventures, a company owned by Julie and Elmer Parba. They had a lot of copycats back then and so since they were from the town of Tisa, they made its own brand as The Original Siomai sa Tisa. 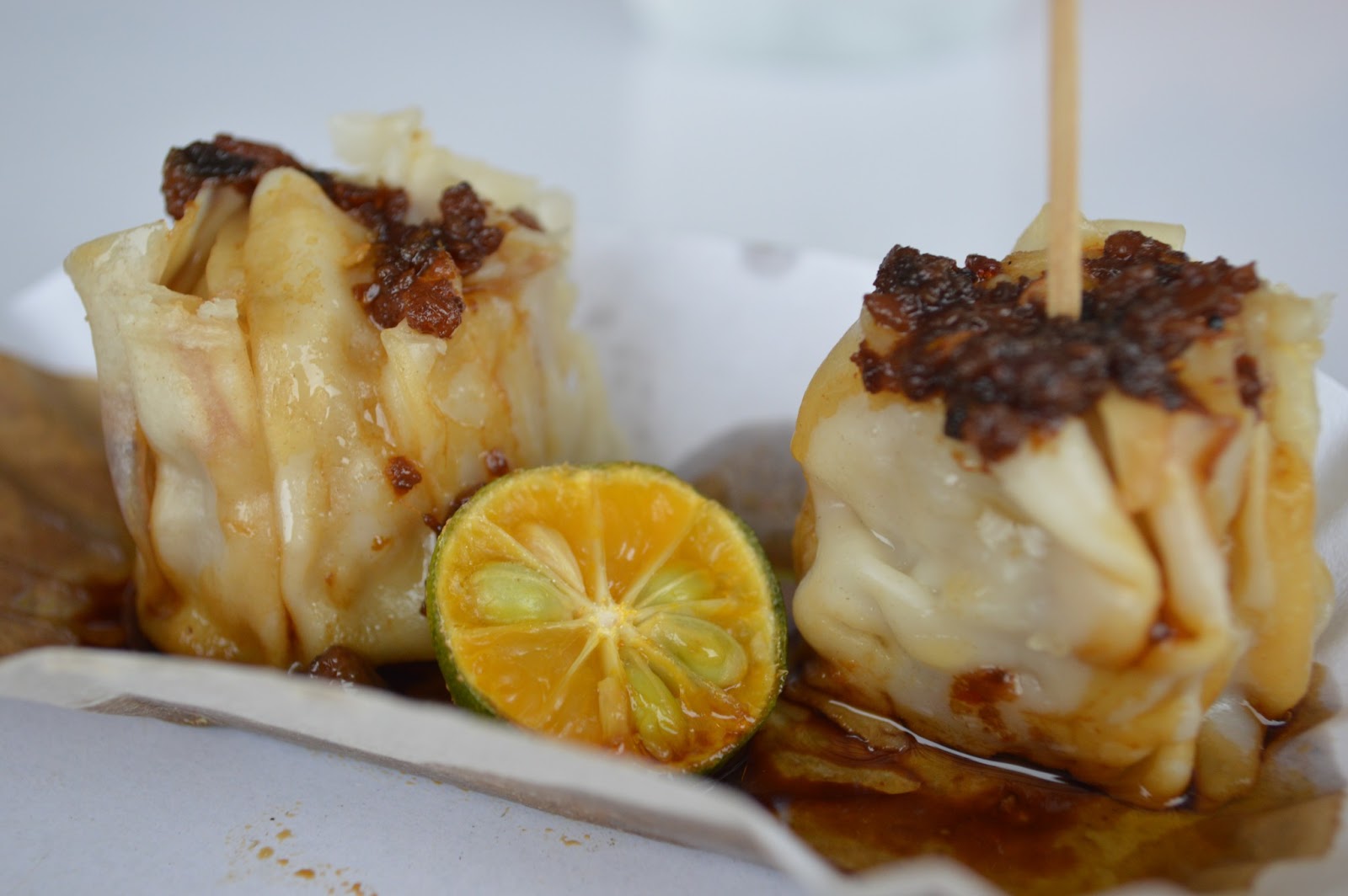 The family of Parbas started making siomai in 2001 through their exclusive dealer, Jeffrey Quillosa, who was then operating a “halo-halo” food outlet in Tisa, Julie said. Six months later, the siomai has become popular, gaining patronage not only from Tisanons but also from people all over Metro Cebu.

Then the rest is history. The locals of Tisa has been thankful to this family for making the dumpling very famous throughout.

In Tisa, The steamed pork dumplings are sold on roadside stalls for P7 a piece, served with chili sauce and calamansi as perfect pair for hot steaming rice. “Siomai sa Tisa” the dumplings which are distinct from other products for the chili sauce made of minced garlic, chopped chili pepper and cooking oil. The name stuck as brand identity.

The Gymnasium had been painted with this Festival Design

While there are other stores and restaurants or even fast food chains which offers these kinds of dumplings too, it has been noted that the "Siomai sa Tisa" one is that which has the yummiest taste througout Cebu. Even the dumpling which can be bought from ChowKing won't be able to compensate how good that one is, perhaps because of the sauce which by the way is super yum! It definitely compliments the dumpling because of its spicy-ness and it has the right amount of saltiness to make the dumpling taste so good. It is best to be partnered with anything cold from soft drinks like Coca-Cola, Pepsi, 7up, Mountain Dew or the locally famous, RC Cola or the Sparkle.

Because Siomai in Tisa has made a name for itself, this resulted to the birth of the Siomai Sa Tisa Festival.

Three years ago, that was 2014 when the first ever festival has started. This is a small celebration compared to Cebu's famous Sinulog Festival yet this is one thing that the Tisaanons, or the locals of Tisa have been looking forward to each year since 2014.

One of the performers during the Grand Parade.

At the gymnasium for their ending dance.

I actually didn't know that something like his is occurring in the town because we just moved a October of last year, 2015 to Tisa so it was just weeks after they had celebrated the event and we were out of idea that they have this kind of celebration.

However, while hubby and I were looking for something to eat during the first week of September, we noticed these stalls being prepared at the side streets of the town. I wondered why there were stalls installed and so I came to ask the coconut street vendor about it. He then mentioned that on the following week, the town will again held their annual festival and these stalls were assembled before hand so the town can have a two-week celebration.

Hearing that, I made sure that hubby and I will be able to witness this for the first time.

It was a bit unfortunate that the rain poured on Sunday, September 25, 2016 where the grand parade for the Siomai Sa Tisa 2016 Festival would take so hubby and I had to stay at home. However, I had been closely monitoring what has been happening. In fact after the rain poured, we went out to the streets and dined there for dinner.

There were different activities that had occurred but the highlight was the Street Dancing or what they call as the Ritual Parade, the members of the contingents were dressed in colorful costumes and used props representing siomai.. There were number of contingents who had joined the said parade. Some of them are the following:

Here's a preview of the parade. This is one of the contingents who had presented their street dance during one of the stops:

This video is not mine, credit to the owner.

The winners of the said street dance competition are the following:

Tribu Kalanggaman (Zone 4) - they were the proclaimed Champion this year and won Php 50,000
Tribu Panginabuhi (Zone 6) - they had garnered the second prize and earned Php 30,000
Tribu Mabulokon (Zone 5) - they got the third place and won Pho 20,000

Aside from that, there were also winners for their Festival Queen competition. This is included as there will be one leading dancer of the parade per contingent and there are criteria too for the Festival Queen which I believe was derived from the Sinulog Festival Queen event. The proclaimed Festival Queen is Mary Jan Ni­­cole Cal and the second prize went to Ja­ne­­vel Ma­rie Pol­le­ros of the Tri­bu Pangi­na­­­­­bu­­hi. While Kienkey Amamampang of the Tribu Magtutudlo (Tisa 2 Elementary School) garnered the third prize.

This video is not mine, credit to the owner.

It was indeed a successful event despite the rain pouring in during the day of the Grand Parade but it was still worth watching. Everyone had enjoyed, the members of the contingents who danced and partied during the Grand Street Dancing, the audience and the viewers at the side streets and even the organizers had fun the whole time during the said activity.

Of course after the fun yet tiring event, the entire team had to eat a lot of Siomai, the pride of Tisa to conquer their hunger. The organizers and the officials of the town of Tisa deserves a big round of applause for the success of the 2016 Siomai sa Tisa Festival.