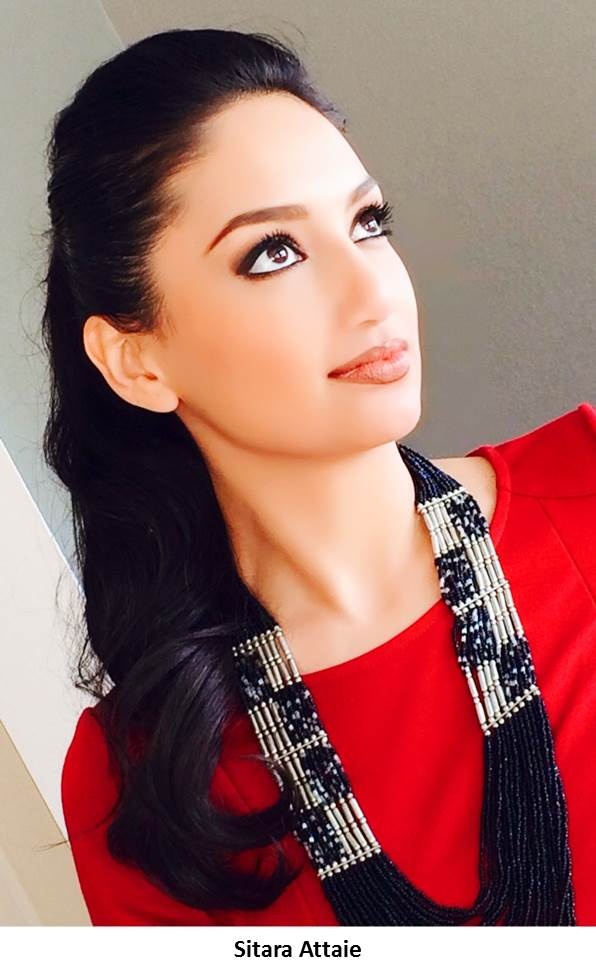 Introduction:  Hollywood actress Sitara Attaie may be the first person in history to quote both the German philosopher Nietzsche and the medieval Afghan poet Rumi in one sentence.

But when she did just that in her first interview with us, it was clear we had to talk again.

In Part One of our exclusive interview with actress-choreographer-linguist Sitara Attaie, we focused on her work as a professional choreographer.

We also took a close look at her personal journey across languages and cultures - from Afghanistan to India, from India to Holland, and then to the United States.

We touched on many other subjects in that first interview too.  Along the way, we learned that there is much more to Sitara Attaie than her world-class work in Afghan and Indian classical choreography. 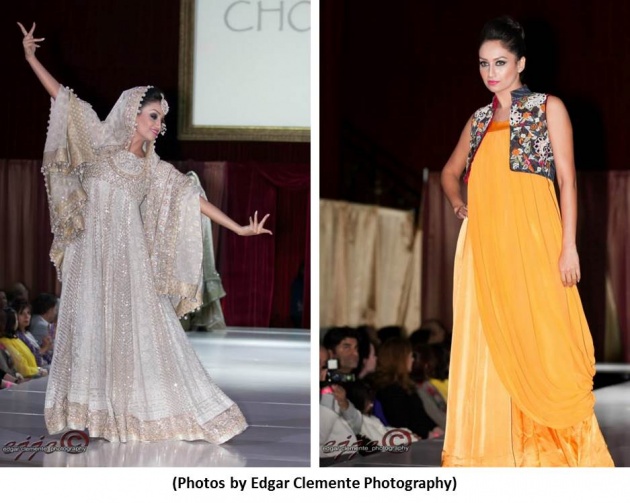 Film Annex:  Sitara jaan, it’s great to talk with you again.  Your last interview inspired a lot of readers from all over the world, and people want to know more.

Sitara Attaie:  Tashakur, Edward jaan.  I really enjoyed our last interview too.  It’s a great pleasure to speak with you again.  As the famous Afghan Proverb says, Az gap, gap mey-khezad.  از گپ، گپ می‏خیزد   It translates as ‘From talk comes talk.’  Most of the time it means that good conversations lead to more good conversations.  This is a good conversation! 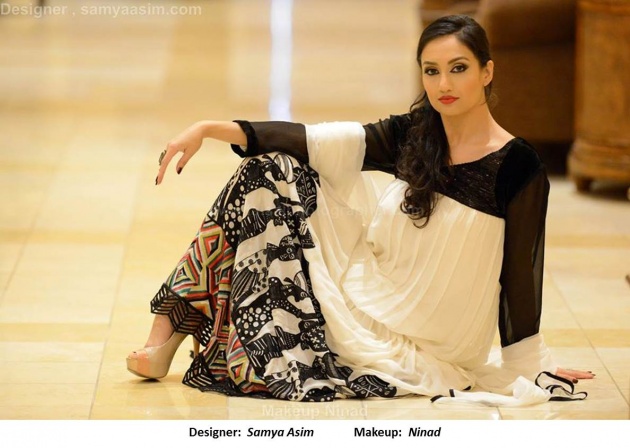 THOUGHTS ON THE AFGHAN DIASPORA

FA:  The United Nations University says that ‘the highly-skilled Afghan Diaspora contributes to innovation and change.’  You have lived in five different countries on three different continents as part of that Diaspora.

What is the best thing about being part of the Afghan Diaspora?  What is the biggest challenge?

SA:  Being part of the Afghan Diaspora, which describes the hundreds of thousands of Afghans who have been scattered around the world by war like other diasporas, certainly comes with its challenges.

Leaving everything behind is very difficult just by itself.  But that’s just one part of the process.

The second part is the journey to the destination. It’s the kind of journey which has cost some Afghans their lives, and has caused lifelong traumas for others.

The third part, and also the longest and hardest part for many people, is the process of integration in a new society, culture and language. 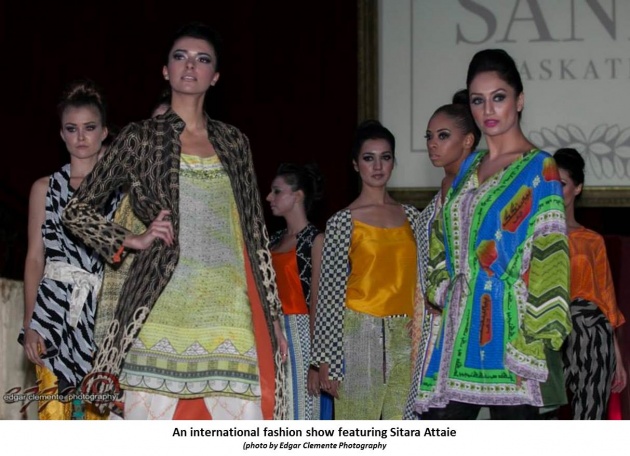 I went very quickly from living like a princess in India to refugee centers in Holland.  It’s certainly not easy to get used to a new country with traditions, culture, and languages so different from your own.

But after a few years, the adopted country becomes home. For me personally, the challenge was to immigrate and integrate into completely new societies three times:  first from Afghanistan to India, then from India to Holland, and most recently from Holland to the United States.

The main benefit of being part of the Afghan Diaspora is the opportunity to see and experience more of our beautiful world.  To become part of societies that initially seem strange or peculiar.  You get to see new places, taste new cuisines, and live various lifestyles.  You learn how our mentalities, daily actions, and even our wardrobes are influenced by our geographical location and different climates. 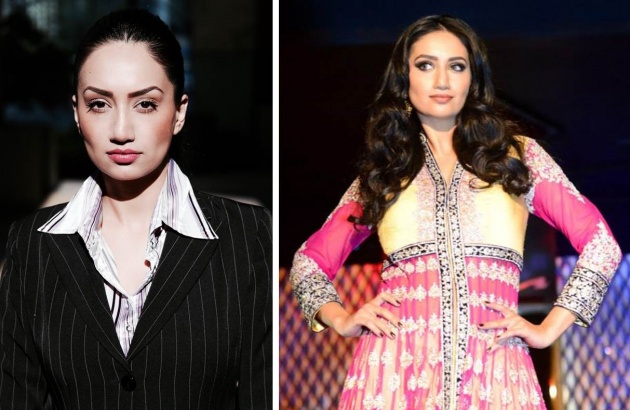 It helps you to learn new things about people, and to become more compassionate toward our fellow humans as a global citizen.  A major benefit for me has been the chance to learn and use multiple languages.  As challenging as it sometimes is, it helps you grow as a person in the long run.

FA:  What can the Afghan Diaspora do to promote the cause of peace in Afghanistan?  Do you have a message for the Afghan people?

SA:  There is a lot to be said about the Afghan Diaspora. I’m very happy to see the number of authors we have, but it is not nearly enough.  I think we need to write more about our experiences as Afghans.  It will help us heal and give a better image to the world of who we truly are. 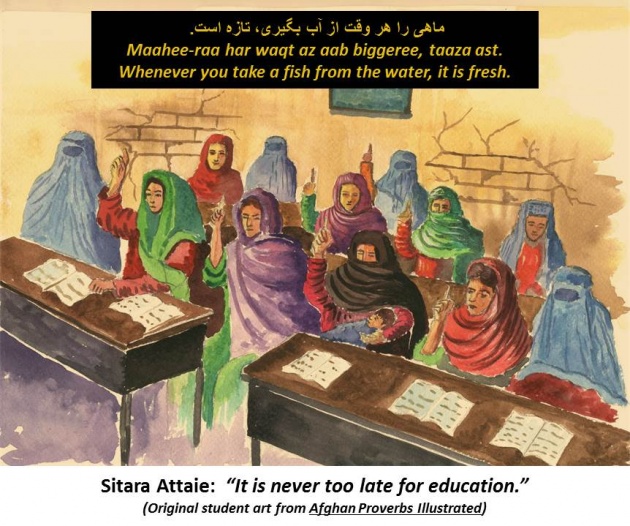 Writing is directly related to what I think is one of the keys to securing peace in Afghanistan: EDUCATION.  It is never too late for education.  This is true for young Afghans who are the future of Afghanistan, and for those who have always wanted to go to school but never got a chance to.

I believe Afghan women are the other important key to Afghanistan’s success. Approximately half of the population of Afghanistan is female, but the majority of them are not part of the workforce. If this 50 percent of the people are given opportunities to help rebuild Afghanistan, it can speed things up tremendously.

In our heart of hearts, we all want peace and prosperity in Afghanistan.  We just need to have more unity among us to actually make it happen. 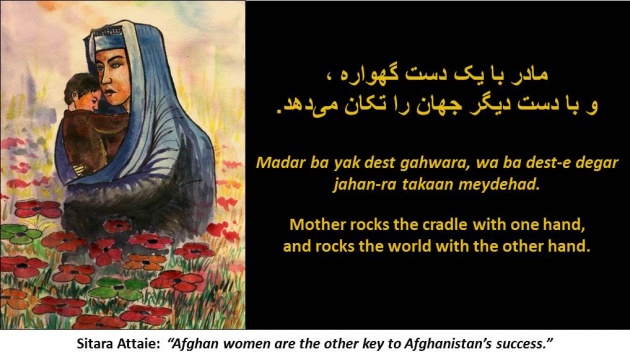 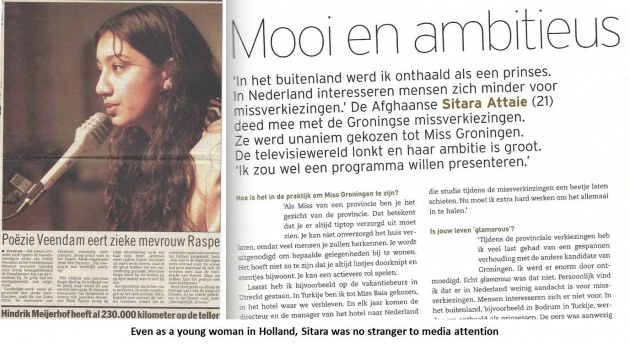 FA:  Please tell us about your television, journalism and film acting work.  If you could only choose one of these paths, which would it be – and why?

SA:  I studied Journalism at Hoge School van Utrecht for a year, and I wrote for different media in The Netherlands as a freelance journalist.  At first, my natural path seemed to be in journalism.  But after 9/11, my Afghan heritage and that path in journalism led me right back to Afghanistan.  It basically became very personal, and I was too emotionally involved.  That became an obstacle because I wanted to practice journalism without any bias.

I also didn’t want to limit myself to only Dutch.  I was well aware of the power of English as an international language. So I changed gear and studied English Literature at Rijks University of Groningen. 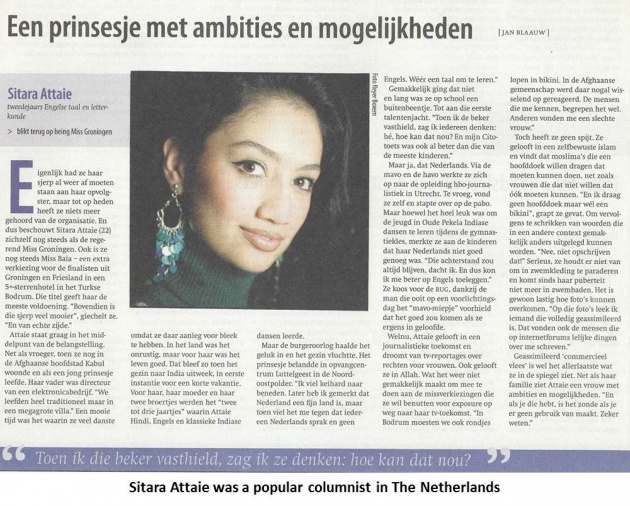 My interest in the world of entertainment and television has always been there. I participated in several Dutch ‘Reality TV’ shows like 12X12, Missen, and some talk shows.  I also had my own TV show for about two years - Sitara Hayee Bollywood – for an Afghan channel called SATV.  I’ve also hosted live events, such as fundraisers for the Afghan Women’s Center for Excellence (AWCE) and other events and concerts.   But hosting is more like a hobby for me. 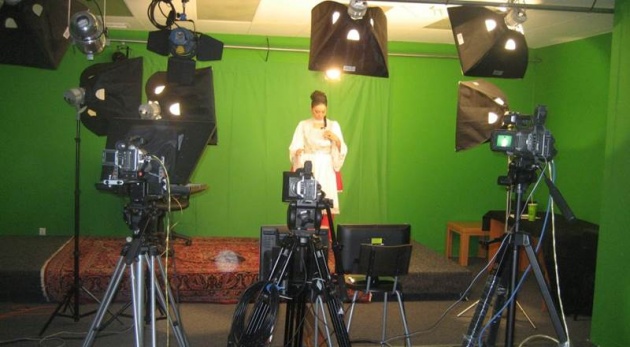 I’ve had a passion for acting since childhood.  But Afghans can be very critical of acting as a profession.  It’s a cultural thing, and that is why at the beginning it was hard to find the courage to pursue it.  But I finally found the spirit to do it thanks to the support of my family.

If I were to choose between my various professions, I would choose acting - because I can experience any other profession through the art of acting.

FA:  Please tell us about your time with SES Entertainment in Holland.  Do you have a favorite story about working with Bollywood celebrities?

SA:  SES gave me an opportunity of a lifetime.  I was asked to become a part of the celebrity promotions team that organizes Bollywood events in The Netherlands.  My knowledge of Bollywood and the Dutch, Hindi and English languages helped me get in the door.

It was an amazing experience, and it taught me a great deal about the world of entertainment.  I learned that celebrities are just normal people like any of us. I saw the kind of hard work, long hours, and dedication that they put in their craft. And I understood the real meaning of the famous show business phrase ‘The show must go on’. 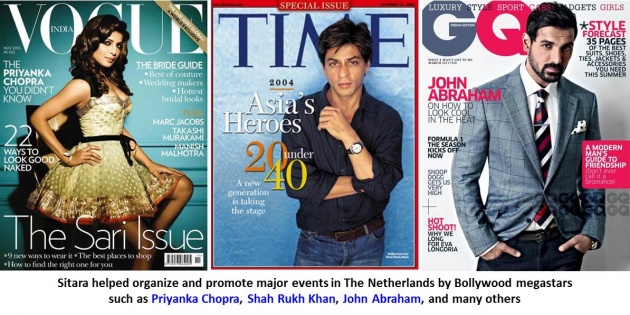 I have been exceptionally blessed to work with those whom I idolized since childhood.  Sitting across the table from celebrities like: Shah Rukh Khan, Hrithik Roshan, Salman Khan, Priyanka Chopra, Rani Mukherjee, Kareen Kapoor Khan, Saif Ali Khan, Arjun Rampal, the late Feroz Khan, Sonu Nigam, Shreya Ghoshal, Sunidhi Chauhaan, Shaan, and the late Jaghjit Singh.  It was like a dream come true. 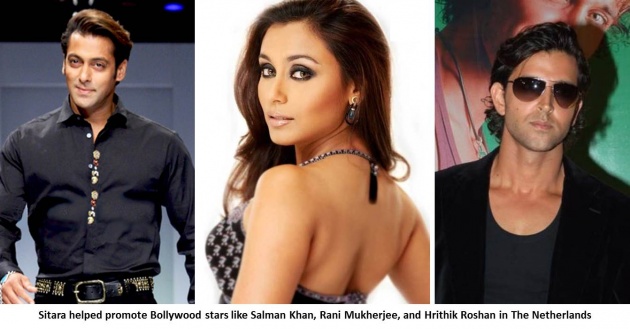 One of my most cherished memories was the day after the massive show Temptation 2004 in Rotterdam. Everyone got together at Shah Rukh Khan’s presidential suite to review the show.  I was pleased to learn that he is a very kind and respectful gentleman.

FA:  You are fluent in five languages, and were so kind to review the pre-publication manuscript for Afghaanse spreekwoorden geïllustreerd - the Dutch-Dari edition of Afghan Proverbs Illustrated.

Knowing both Afghan and Dutch cultures as well as you do, is there a difference in the way the two use Proverbs?  Can you give us an example of the same idea in both an Afghan and a Dutch Proverb?

SA:  I truly enjoyed reviewing Afghaanse spreekwoorden geïllustreerd.  I’m so grateful that you took the initiative to publish Afghan Proverbs for people to enjoy, learn and use.

Dari and Dutch are two of the languages I grew up with.  After having spent most of my life in The Netherlands as an Afghan, I can honestly say that I see more similarities than differences in the way Proverbs are used.  Both Afghans and Dutch love to use Proverbs in daily conversations.  I often saw books with Dutch Proverbs in our friends’ homes in The Netherlands.  I’m so pleased that Afghan Proverbs also are now on Dutch readers’ bookshelves.

My favorite Afghan Proverb has been the same ever since I was a young girl:

Even the highest mountain has a path to the top.

These two Proverbs have exactly the same meaning.  I’ll bet you can find a version of this Proverb in almost every language.  It has such a deep and universal message for all people.

We need to remember this Proverb in Afghanistan now more than ever.  We must gain hope and strength from it, because it’s so true. 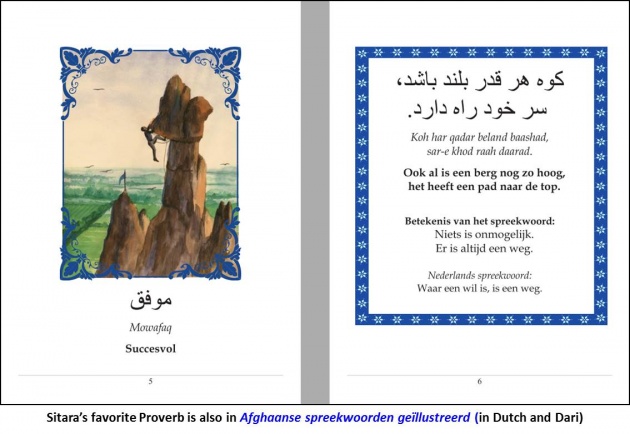 FA:  What inspires you?

SA: That’s easy - Love and Creativity!  I get inspired by the work of people who create something powerful.  Inspirational books, elevating music, illuminating movies, beautiful art, beautiful choreographies.  Anything that creates a form of love.  I get inspired when I see infectious acts of kindness.  I believe we are meant to love and create.

I like to create things, either because I get inspired by someone else’s creation, or because I want to inspire others with my creations.  I choose to love because our core nature is to be kind loving beings - not vicious beings.  It is the act of loving and creating that makes me feel most alive.

FA:  Tashakur, Sitara jaan.  You certainly have inspired many people around the world with your own life and art.  We look forward to future updates on your ‘path to the top of the highest mountain.’ 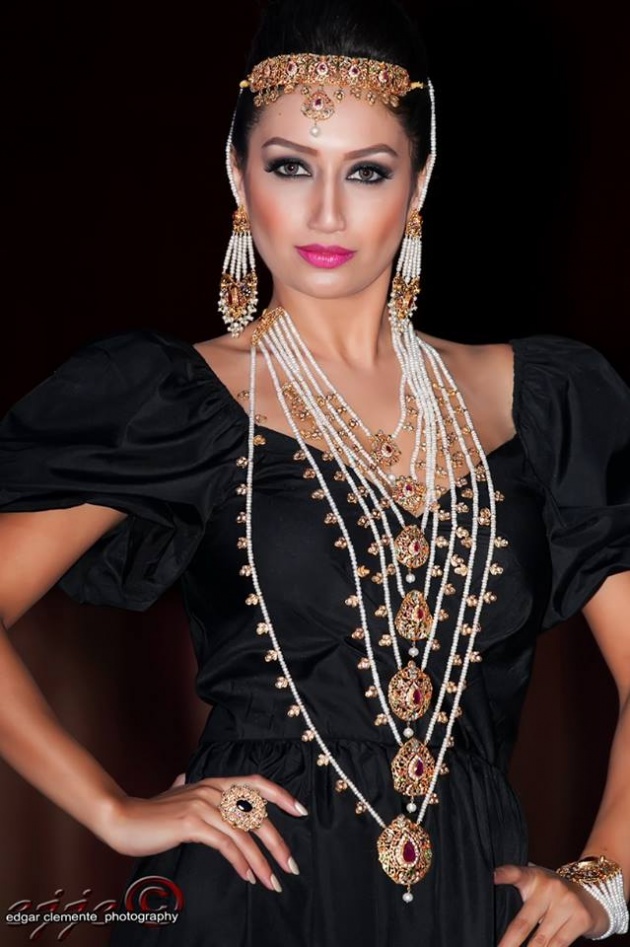 Return to Part 1 of our exclusive interview with Sitara Attaie