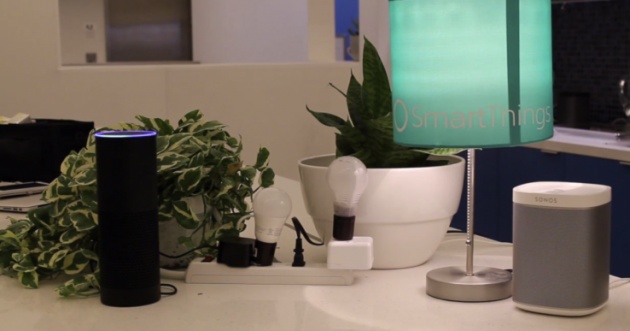 It would appear that Amazon has plans to team up with SmartThings to power various home automation features with the Amazon Echo, the voice-powered personal assistant device.

According to a Google web cache of the SmartThings blog, the Amazon Echo will soon be able to power any SmartThings-compatible devices in the home through a simple shout-out to Alexa. That includes non-SmartThings items that are plugged into a SmartThings Power Outlet, as well as switches and lights from the company.

Based on a demo video (which was set to private, but we guessed the password: “Alexa”), users who have both an Echo and any SmartThings products will be able to ask Alexa to turn on various devices by name, and even dim the lights.

The blog post has since been pulled, so there’s no word on when this will actually become official.

The Amazon Echo first debuted in November 2014 with limited availability to Prime members who signed up for an invite. The device, which is shaped like a thin paper-towel roll, sits plugged into a power outlet and connects to WiFi to answer any and all of your household needs.

Through an always-on microphone, the Echo listens for a command word (“Alexa”) and is able to perform various Google searches to answer queries, add items to your Amazon shopping list, and even tell jokes.

In June of this year, the Echo was made available to anyone in the United States for $179, and a few days later, Amazon opened up an Alexa API for developers to integrate with the voice-powered IoT device for other, yet-to-be-discovered use cases.

In terms of the proverbial smart home, Amazon originally tapped Wink to power different functions in the home using the Wink Hub and compatible devices.

But based on the now-pulled blog post from SmartThings, it would seem that Amazon is broadening smart home options for Echo owners.

We’re excited to announce that SmartThings is now compatible with Amazon Echo!

For those not familiar, Amazon Echo is an Internet-connected speaker that responds to commands and questions that you ask it. (Think of it as your tall, dark, and handsome personal assistant.)

By starting sentences with “Alexa,” you can play music, hear the news, get the forecast, and now… control your SmartThings-compatible lights, switches, and anything plugged in to the SmartThings Power Outlet.