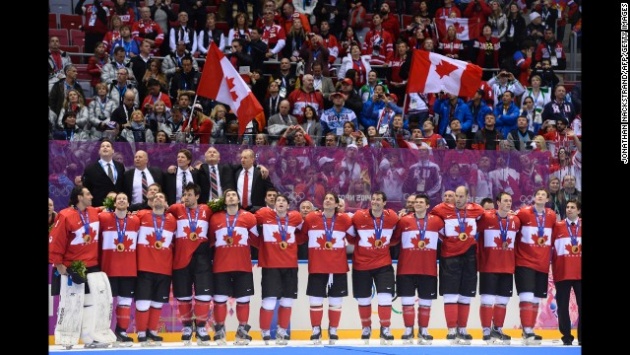 (CNN) -- When the Winter Olympics roll around, Canadians pretty much always expect the national hockey team to win gold.

Sure enough the squad ultimately didn't disappoint in Sochi, claiming the finale 3-0 against Sweden on the final day of the Games.

It was Canada's second straight men's gold at the Olympics and third in the past four. And coupled with the women coming out on top in the women's competition, it gave Canada a much coveted hockey double.

Russia crumbled amid heavy expectations in the men's hockey but the host nation, helped by a sweep in cross country skiing's 50-kilometer mass start Sunday, led the way in both medals won with 33 and gold medals tallied with 13.

Canada finished third in golds and fourth overall after it blanked Sweden at the Bolshoy Ice Dome.

With Canada hockey mad, questions were asked about the roster prior to the Olympics and eyebrows raised following unconvincing victories over Norway and Latvia in Sochi.

But Canada picked it up when it mattered, overcoming the U.S. in the semifinals and also blanking the Swedes.

"I think anyone knows the talent and ability this team has," centerman Jonathan Toews told Canada's CBC. "A huge credit goes to our commitment to playing a team game and will to win.

"People were doubting whether we can score goals in this tournament. It's easy for a group like that to go press and try and create offense and get away from our game plan but we stuck with it every single night. Here we all are on top of the podium so it feels really good."

Carey Price -- who plays for the Montreal Canadiens, perhaps the most storied hockey franchise around -- made 24 saves Sunday after keeping out 31 shots in the semis.

Pittsburgh Penguins superstar Sidney Crosby, Toews and Chris Kunitz scored for Canada and it was more than enough given Price's stellar performance.

"Playing behind that group of guys was a lot of fun," Price told the CBC. "That work ethic that those guys brought to the ice every day made my job easier."

As he did following the semifinals, Canadian Prime Minister Stephen Harper took to Twitter to congratulate the team.

Sweden entered the clash short-handed, with key centerman Nicklas Backstrom of the Washington Capitals testing positive for a banned stimulant.

"I've got absolutely nothing to hide," Backstrom told reporters. "It was shocking to me and at the same time I'm here right now and I have to deal it.

"I haven't done anything differently in the past seven years and I've been playing internationally all that time."

The NHL issued a statement and said it wouldn't take any action against Backstrom.

"It is our further understanding that the positive test was the result of a common allergy medication taken by the player knowingly, with the approval of the team doctor and without the intention of gaining an illegal or improper performance-enhancing benefit.

"In addition, the specific substance that resulted in the positive test is not currently on the League's Prohibited Substances List.

"Subject to confirmation of the facts as we understand them, and given the fact that the substance is neither prohibited in the NHL nor was used in an improper manner here, we do not anticipate there being any consequences relative to Nicklas' eligibility to participate in games for the Washington Capitals."

Russia was tied with Norway for gold medals won prior to Sunday and led the U.S. by two overall. The 1-2-3 finish in the cross country ensured glory in both categories.

Alexander Legkov edged Maxim Vylegzhanin by 0.7 seconds, with Ilia Chernousov capturing the bronze in a photo finish. Legkov's time was a shade past one hour, 46 minutes.

"This is priceless," Legkov told reporters. "It's more valuable than my life. I can't express how I feel. For 15 years I've been trying for this result."

Alexander Zubkov added to Russia's tally of golds in the four-man bobsleigh, his quartet squeaking past Oskars Melbārdis' Latvian crew by 0.09 seconds.