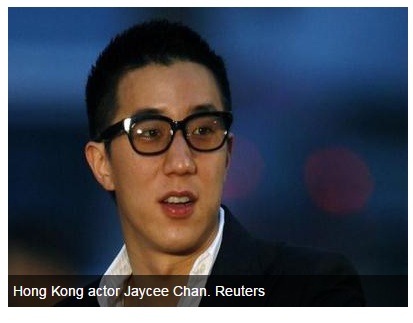 Jaycee Chan, the son of kung fu movie star Jackie Chan, was jailed for six months in China on Friday on a drugs charge, the latest celebrity felled by the government's aggressive anti-narcotics campaign.

The younger Chan, a 32-year-old actor and singer, was formally charged last month with "the crime of sheltering others to take drugs" after testing positive for marijuana, with police saying they found 100 grams of the drug at his home. He faced a maximum prison sentence of three years.

A judge in Beijing's Eastern District Court, where Chan was being tried, sentenced Chan to six months in prison and fined him 2,000 yuan ($322), according to a microblog post by the court.

Chan is likely to be set free in over a month as the authorities would take into account the time he had spent in detention since last August, according to Si Weijiang, a lawyer.

Prosecutors said on Friday Jaycee Chan had made his home available for two people, surnamed Ke and Li, to smoke marijuana, according to the court.

The court said Chan had "voluntarily pleaded guilty" to the prosecutors' allegations.

"I have broken the law and should be punished," Chan said in his final statement to the court, according to the microblog. "When I return to society, I will not repeat this because I have let my family and friends down yet again."

Dozens of reporters gathered outside the courthouse in Beijing for the trial.

Celebrities have been a major linchpin in the government's campaign to get tough on drugs. Jaycee Chan is among a string of other mostly B-list celebrities detained last year by Chinese authorities on drug-related charges that have been publicized widely in both state and social media. They have included movie and television stars, film directors and a prominent screenwriter.

The court's microblog showed Chan in court, dressed in a black sweater and blue trousers.

Illegal drugs, especially synthetic substances like methamphetamine, ketamine and ecstasy, have grown in popularity in China in tandem with the rise of a new urban class with greater disposable income.

Last month, state media reported that Jackie Chan felt ashamed of his son's drug abuse and hopes that one day he will speak out about the dangers of taking drugs.

The older Chan had served as a goodwill spokesman for the China National Anti-Drug Committee in 2009, promoting anti-drug education.