China is an economic giant of the world. It has 14 land neighbours and 6 sea neighbours. China had total of 23 territory conflicts with its neighbours. South china sea conflict is one of most prominent Chinese territory conflict, still unresolved. South china sea, located in south of china is part of Pacific Ocean and is claimed by China, Malaysia, Vietnam, Brunei and Philippines and Taiwan. The problem started in post-World War II era in 1945. The conflict remained in blackwaters for about 25 years until Chinese occupation of Paracel archipelago, 1974, withdrawing Vietnamese out of the archipelago. In 1976 oil and gas resources were discovered in South China Sea which further added fuel to the conflict. Hydrocarbon resources are also being discovered in the seabed in 21st century. All of claimant countries claimed for extension of their continental shelf so that they may enjoy resources discovered. Seeing the situation china increased its presence in South China Sea. China confronted fishermen of other countries and also harassed ships of claimant countries.

China claims this part of sea by its historic nine dash line. Actually. Both Paracel and Spratly islands are uninhibited rocks. But china is converting them into islands artificially to get legal continental shelf and exclusive economic zone of island as mentioned in United Nations Sea Law Convention of 1982. That’s why china is converting rocks into islands and increasing its military strength in South China Sea as proved by 2015, 2016 satellite photographs. According to sea law of United Nations convention 1982, Article 3, an island has continental shelf extended to 12 nautical miles and 200 nautical miles of exclusive economic zone.

South China Sea bears a critical importance in economy and trade of ASEAN countries and China. Some points of its importance are as below. 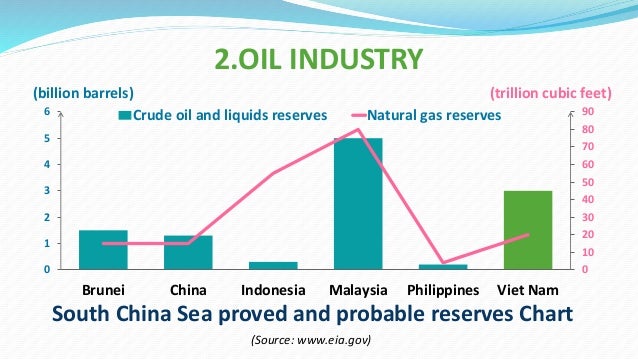 South China Sea is also important for fisheries as it contain about 10pc of world total fisheries as estimated.

Most important factor of South China Sea is its use as trade channel. According to United States department’s report $5.3 billion worth of goods are traded through south china sea and its is about 30pc of world’s total sea trade. While china declares these figures as inflated.

All the claimant countries want to resolve the problem but in their own way. China want bilateral or multilateral negotiation without involving third party like US or UN. While its opponents seem to involve united states as third party as they fair that without third party intervention, economically powerful china will impose its interests on them. China, 2002, succeeded in bringing ASEAN countries under ASEAN-China declaration which stats that claimant countries will resolve conflict by negotiation without involvement of UN or International Court of Justice (ICJ).

Most of the sea under China’s control is high waters and UN law on seas allows all ships including warships to navigate freely in highwaters. So, Obama administration announced freedom of navigation Operation in 2011 and two US warships navigated within 12 nautical moles range of islands under chines control in October, 2015 and May, 2016 under this operation.

On 2 may 2014 Vietnamese warship collided with chines vessel at oil rig in South China Sea claimed by china. Oil was discovered at this point in 2009. Similarly, Filipino ships had clashed with chines navy many times. On 12, July 2016 permanent court of arbitration declared nine-dash line illegal and gave decision in favour of Philippines. But now Philippines seems to be willing to start talks with china. Similar is the case with Malaysia which also announced negotiation with china on this conflict.

South China Sea conflict should be resolved for batter economic and peace situation in Pacific Ocean. Trump administration wants to confront china and some US state secretaries has openly mentioned it. But US is busy with North Korean nuclear conflict and china is required to neutralize the conflict that’s why US is not taking offensive steps against china.

Illegal control of china over entire South China Sea should be countered for batter and balanced peace and economic political environment in the region.