In previous 15 lectures we have discussed about the space and the Solar System. We have study that Space is the boundless three-dimensional extent in which objects and events have relative position and direction. Physical space is often conceived in three linear dimensions which are x-axis, y-axis and z-axis.

We have also study about the sizes of different planet as compare to earth. We study about Jupiter, Saturn, Uranus, Neptune, Earth, Venus, Mars and Mercury. 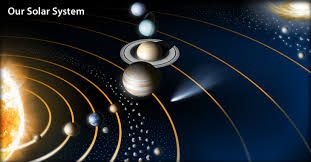 Cosmology and astronomy is a branch of science in which we study about the whole universe is called Cosmology It also includes theories about its origin, structure, evolution and future.

HUBBLE’S LAW state that “The distance to objects beyond the Local Group is closely related to how fast they seem to be receding from us,” that’s Hubble’s law in a nutshell”.

We also discuss about the Earth age. At the present time, estimates of the age of the universe range between 7 and 20 billion years. Lower estimates in this range seem to conflict with the age of the oldest stars, which are believed to be about 16 billion years old. Then we study about RED SHIFT. In physics, red shift happens when light or other electromagnetic radiation from an object is increased in wavelength, or shifted to the red end of the spectrum.

Then we study that “the change in frequency of wave for an observer moving relative to its source it is called Doppler effect or Doppler shift.

The big band theory is related to the earth history. Russian-American physicist George Gamow said that the universe was created due to an extremely large explosion, which now called the big bang. After that we study that The Steady State Theory. This theory is alternative to the above Discussed Big Bang theory of the universe's origin.

Further we have discus the EVOLUTION OF THE UNIVERSE and also the glaxy. Galaxy is the group of hundreds of millions of stars orbiting around a centre. According to estimate there are about 50 billion galaxies in the universe. Then we study that

Our Earth and the Solar System is located within the Milky Way. Milky Way is the large disk-shaped galaxy that includes the sun and its solar system.

We also discus the Black hole, which is the hypothetical object of extreme density, which is having gravitational field so strong that nothing including electromagnetic radiation can escape from it. It appears totally black. Than see the solar System briefly. The solar system comprises the Sun and its planetary system of eight planets, as well as a number of dwarf planets, satellites (moons), and other objects that orbit the Sun (moving around the Sun). Then we look “the sun and the solar wind” which were related to Sun and there direction of Solar Wind is outward form the Sun.

That was all about the today’s lecture. In next lecture we will carryon the study of rest of the summary related to the Space and the Solar System