Spending a night in 'The House on Haunted Hill...'

'The House on Haunted Hill' is an utterly classic example of cheesy horror from the 50s. It's as fun as it is ridiculous, and that's just delightful.

From the opening moments of screaming, moaning, and malicious laughter, all set against darkness, you know you are in for a carnival ride of a film. Perhaps its an old and creaky carnival ride, sure, but what's wrong with that? Nothing, I say!

From out of the darkness comes the iconic face of Elisha Cook Jr: The go-to-guy when filmmakers of the time needed a supremely nervous fellow (For more examples of this see 'The Maltese Falcon,' or 'The Killing'). He introduces himself, staring directly into the camera, breaking the 4th wall, which actually was important, in regards to the big gimmick of this film when it was originally projected... 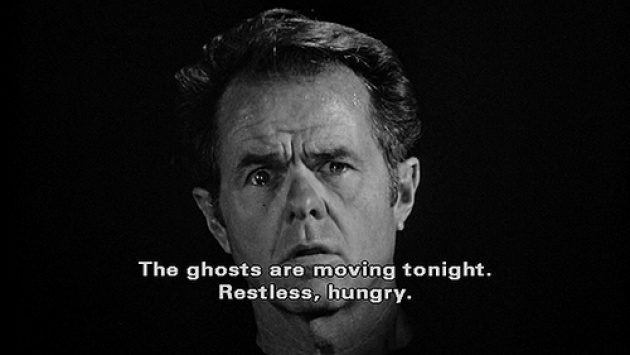 You see this film was directed and produced by William Castle. Castle was famous for his extemely gimmicky horror films and general showmanship. He also made 'The Tingler,' which was screened with hidden buzzers placed under audience seats so that when the titular tingler creature got loose in the film, the audience watching it would get zapped and feel it as well! I've seen 'The Tingler' projected with special zap seats and let me tell you: It's a thing of wonder.

So for 'The House on Haunted Hill' Castle's gimmick was something called 'Emergo.' Emergo was a pulley system installed into certain theatres showing the film that allowed for a plastic skeleton to be flown over the audience at a pivotal time. So this film was all about breaking the 4th wall, literally! 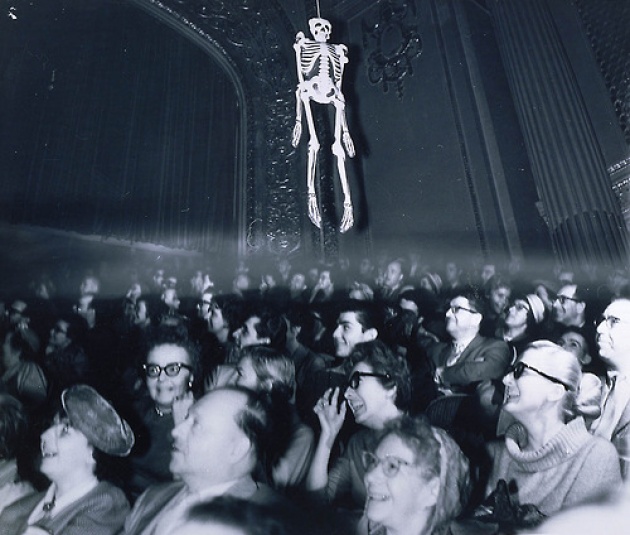 Rapt audience members in the 50s enjoying their Emergo skeleton. Fun fact: This photo was taken by none other than the famous photographer Weegee who was known for his gritty photos of New York City, and was also a technical advisor for  Stanley Kubrick on 'Doctor Strangelove.' 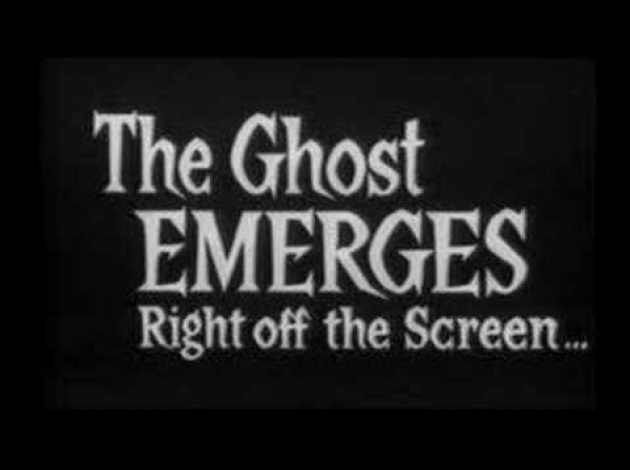 A still from the trailer announcing the gimmick.

So, back in the film, the floating head of Cook explains that he is the owner of the world's only true haunted house in which seven people (including his brother) have been murdered in. Of course he himself doesn't live there as the one night he did try to stay there he nearly died....

And then in zooms the image of the house itself and...what? What is this? Why it's not your typical old spooky Victorian haunted house at all! Why, would you look at that it's the famous Ennis House of Los Feliz, built by none other than Frank Lloyd Wright!

Shocking, no? But very cool indeed. Also cool: This house was also used in 'Blade Runner' as well as in 'Twin Peaks!' All the scenes for 'Invitation to Love,' the soap opera on tv within 'Twin Peaks,' were shot in this house.

But, you say, if the nervous guy won't go in the house, how can we have a movie there? Well the answer is, naturally, VINCENT PRICE. He rented the house out because he's an insane millionaire and has invited five seemingly random people to the house for one night for a party he is throwing for his fourth wife. If all the guests can stay the whole night they will each get $10,000.

Now if you're saying, wait, none of that really makes any sense, that's ok. You're right. It doesn't! It's all just a front for Vincent to kill his wife. Or...is it? Oh whatever really, it's just a crazy delightful campy horror thing with ghosts and severed heads and flying skeletons and intrigue and silliness and vats of acid in the basement...So...why don't you just watch it and have a good time, yes?