Story time: Back on the Mat (My Aikido Journey) 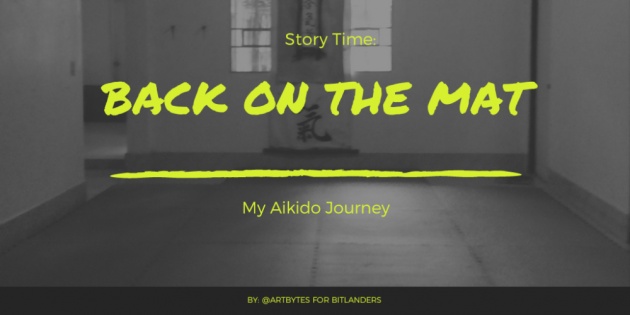 There is one thing that I have not mentioned in my profile is I am an Aikido enthusiast. Not an expert, just an enthusiast. You may have noticed that I have posted some drawings depicting martial arts. One of those is actually an Aikido Technique. 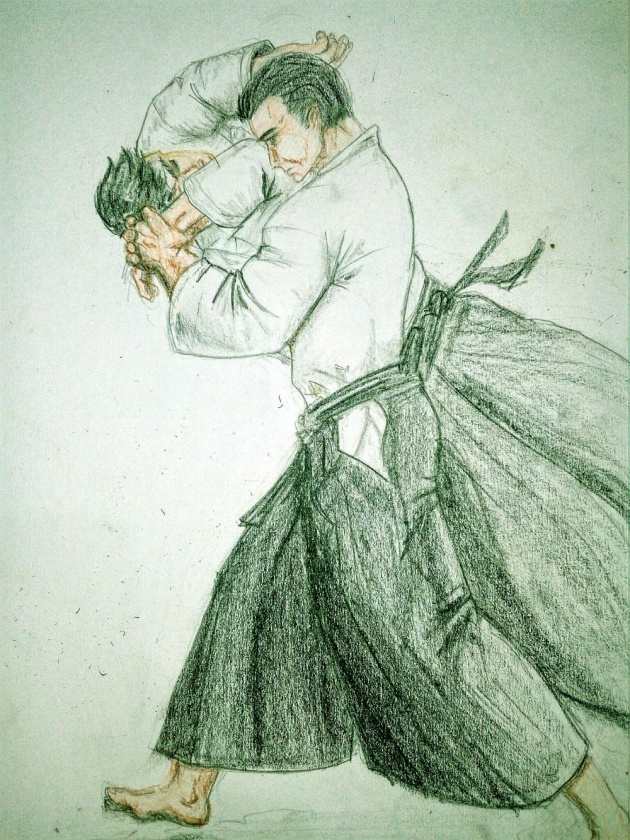 Aikido is relatively a modern martial arts from Japan. It was developed by Morihei Ueshiba back in the 1930's. The techniques in Aikido are derived from a number of different martial arts including both empty hand and weapons techniques. The major influence, however, is the Daito Ryu Aiki-Jujutsu.

The Japanese martial art of Aikido is a comprehensive system of throwing, joint-locking, striking and pinning techniques, coupled with training in traditional Japanese weapons such as the sword, staff, and knife.

Aikido is quite different martial arts. The techniques in Aikido are designed to subdue and stop an attack without, as much as possible, inflicting serious injury to the attacker.

A Quick Look at My Journey in Aikido

I started training Aikido in Cebu City (Philippines) when I was 20 years old. I trained almost continuously for 5 years. I was forced to stop because of a minor injury on my shoulder. When I got a job already, I still visit our dojo occasionally. However, since I often travel outside Cebu, I wasn't able to practice anymore.

When I came back home to Roxas City, I met a couple of Aikido black-belts. With a handful of other new students, we practiced for a while. However, it lasted only a for a few sessions.

Moving forward, it was only in 2017 that we were able to form a new group. Along with a number of new practitioners, we formed "Roxas City Aikido Club" and established our own dojo. 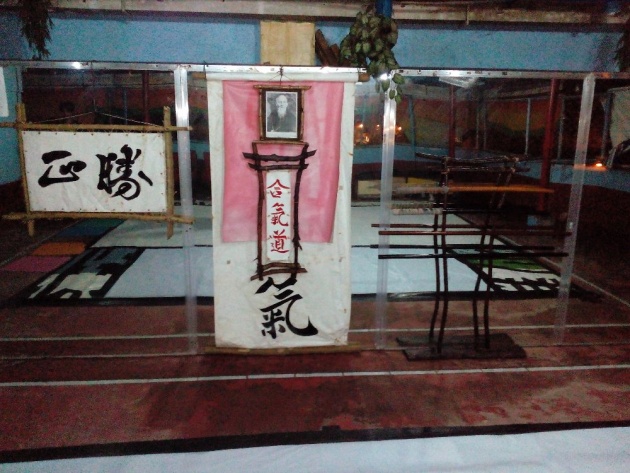 The home or the front of our former dojo.

By summer of that same year, were able to hold a short-term Summer Aikido Training for Kids. There were only seven of them but that was good enough for us. 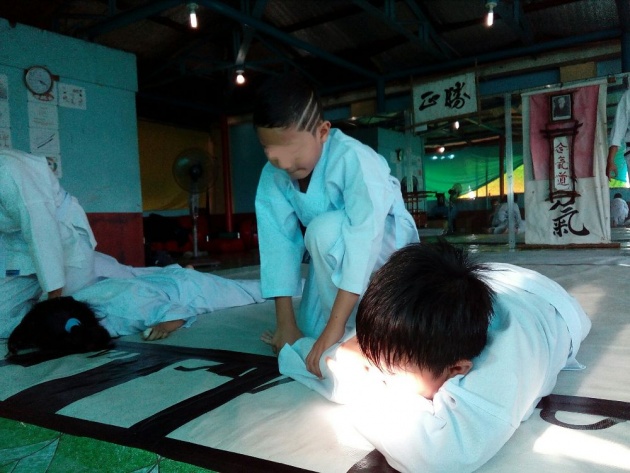 One of the kids executing a technique.  (Note:  face has been altered for his privacy)

A leaky roof on our dojo, however, forced us to look for another location. Since we don't a budget for rental fees, it was difficult for us to find one.

It was only through the generosity of an acquaintance of mine, that she offered the living room of a vacant house for us. The rooms of that house are used as stock rooms and she converted the driveway into a snack house/ restaurant. 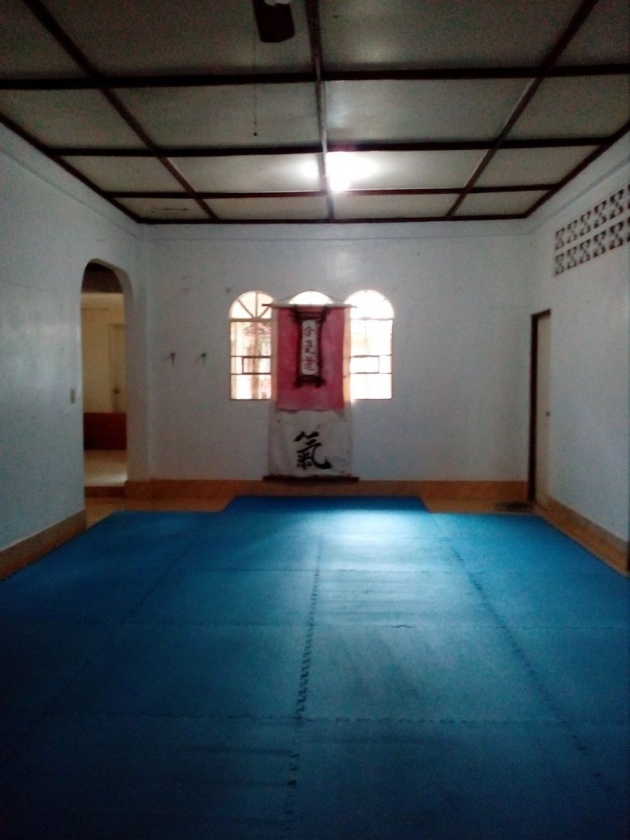 Our new dojo with the new puzzle mats.

With the contribution of the members, we were able to purchase 30 sets of puzzle mats. They were not the high-quality ones used by other martial-arts here, but they were good enough for us to start with and they were much cheaper and lighter too.

While setting up our dojo. We were working out to join a national organization that is affiliated with the International Aikido Federation of Japan - the worldwide governing body of the entire Aikido organization. Fortunately, a friend of mine had his initial training in Aikido Philippines, Inc, or AikiPhil.

Though it is not quite official yet, we are now under the banner of AikiPhil.

The new mats are set, the dojo is ready, and we have an affiliation. However, we had another problem. Our regular students are not available for practice except for one or two occasionally. We don't blame them. Some are still studying, some are teachers, a couple was nurses. So during class days, most are quite pre-occupied on their own respective areas.

For a few months, once again, we were not able to practice. The dojo was gathering dust.

A week ago (from the time of writing), we started another summer training program. At least four new kids joined us and one from last year returned. This week, three more of our kids from last summer joined. Also, another Aikidoka who recently went home joined us for the regular session. It's a good sign.

Hopefully, more people will be interested in joining us.

Visit From Sensei Mitch of AikiPhil

Just last Saturday (April 15) Sensei Mitch from AikiPhil visited us gave us a few hours of training and demonstration with the kids. 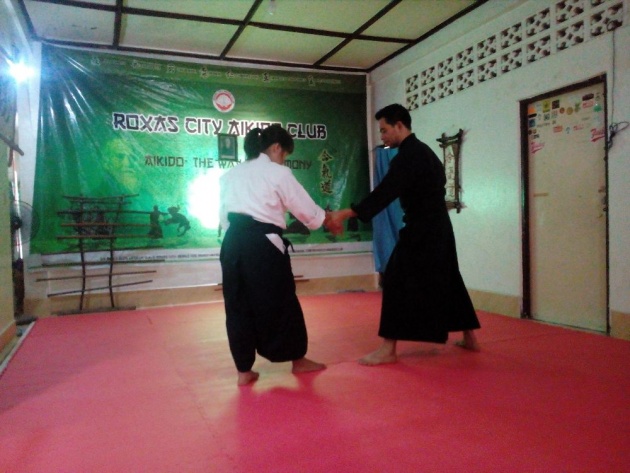 The kids, except for one were all beginners. So they were amazed at the "new" techniques that Sensei Mitch demonstrated. Although, they were actually part of the basic techniques.

After giving us a few techniques, she went ahead to perform jiyu waza (one on one free form) with Sensei Russ, then me.

Ukemi (breaking one’s fall) is the art of "taking it," the ability to fall, roll or be forcefully thrown to the ground and get up unscathed. Often oversimplified, usually completely ignored, ukemi is an art form all it's own.

I haven't practiced for quite a while. Well, all of us here, actually. So after a few throws and arm-locks, I got winded. I was willing to go on but I guess, it was already apparent that I was catching my breath.

However, taking ukemi from an experienced Aikidoka felt good. Since I'm my forties, I wanted to challenge my self if I could still the rolling and falling correctly. Especially the high falls.

After the short jiyu waza with Sensei Mitch, I felt great and I thought it was good to be back. 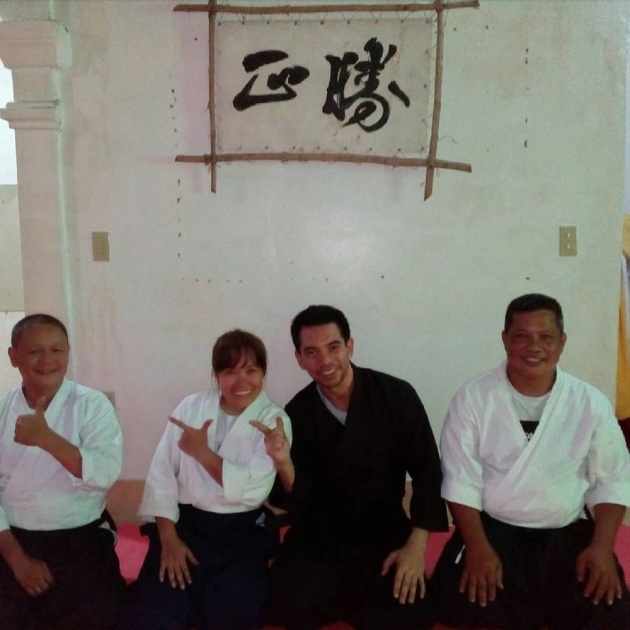 The author with Senseis Mitch, Russ and Cam

This is quite a side story. Since our province is celebrating the Capiztahan Festival, we too Sensei Mitch a short tour of the city and a taste of our seafood. Capiz is known seafood Seafood Capital of the Philippines. So we took her for a dinner at one of the seaside restaurants that serve restaurants seafood along with pork and chicken barbecue.

We ordered some shells, squids, oysters, along with catfish and chicken barbecue. 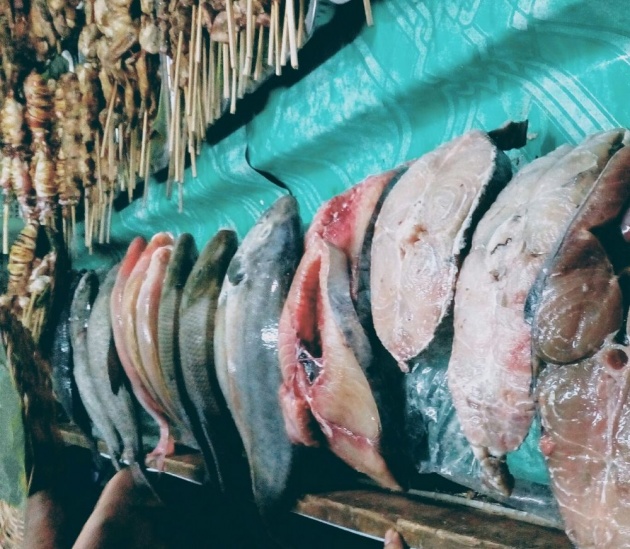 A variety of fish and other seafood to choose from.

The next day, we prepared a lunch at Sensei Cam's house that happens to be along the beach. Again more seafood, fresher and seafood. Plus we ate near the beach under the coconut trees. It was quite a refreshing lunch. 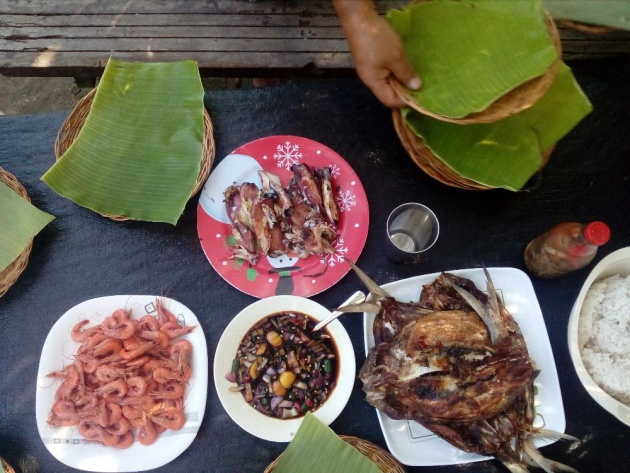 For the Love of the Art.

Aikido is the first and only martial-art that I had formal training with. In my experience, once I stopped practicing, somehow, my body is looking for the wrist-locks and pins, "slams" and high-falls. Not that my body is looking for "pain", there is something in the movements in performing the techniques that we love. Perhaps, because almost every part of the body is involved when executing a technique or "ukemi" (falling). It makes a perfect cardio-vascular exercise.

We have a saying:

Suffice to say, when I said "Back on the Mat", I meant two things: 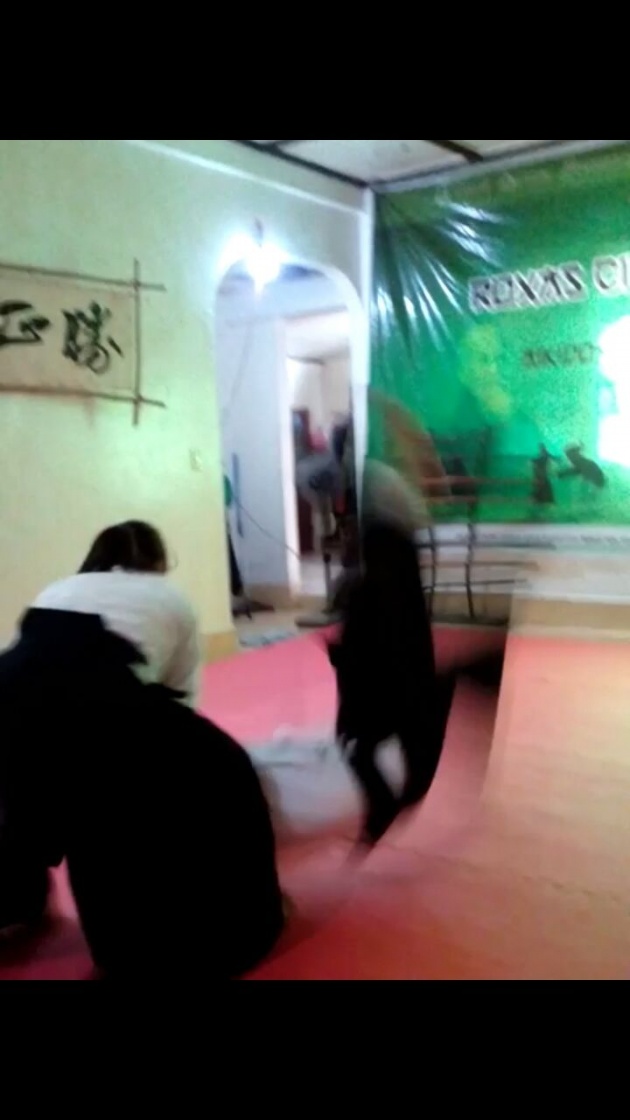 My back on its way to the mat.

This is it for now. I have more information about Roxas City Aikido Club at http://roxasaikidoclub.blogspot.com

You can join Bitlanders by clicking this link: http://bit.ly/Join_bitlanders

How Spending Time Alone Helped Me to Find Peace and Rediscover Happiness!

How Spending Time Alone Helped Me to Find Peace and Rediscover Happiness! All of our unhappiness com…

i have no idea