Summer as a Kid in the Philippines Part 2

I am adding a Querlo survey of being a teamplayer since the games we do when we were still young involves different people with different characteristics and attitudes as well.

Previously, I did post a blog entry on a picture of how my childhood was specially during the summer time. It was one of the most unforgettable memories I had while I was a child together with my brothers and my neighbor friends. Today, I am posting another entry as a continuation about my childhood summer memories. In case you would like to check the first part, you may click on the link below:

Summer as a Kid in the Philippines 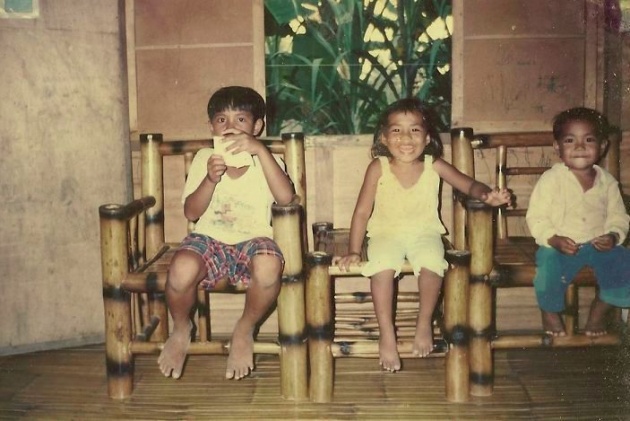 I don't have any other photo to show you but here's how we look after swimming, from left to right, my older brother Steven, me and my younger brother, JR.  Photo is mine.

Let me start this blog with the number one option laid for us in the sea although the last point I had written on the previous blog was games, this one below is actually the number one priority.

Now, this I believe is the best of all base on my childhood experience, since my family live in this place where the sea is just less than five minutes walk, my brothers together with other neighbors would enjoy the salt waters from morning till afternoon, sometimes we don't eat lunch so we won't miss the fun!

We were lucky that our grandparents are living in the coastal area so we would just go there to eat lunch and afterwards would dive back to the sea again. We were all very dark by the afternoon time. My mama will be coming by the seashore with a stick on hand so we would be scared and go home. It was fun as well being ran after by mom with her stick.

Once we get home, our parents would tease us that we can't anymore be seen in the dark unless we would grin and show our teeth. That's how dark we were. But we don't care about complexion at that time though, it was all mere fun that we were after to.

8. Hunt for Seashells/Fishes with Friends

I did mention on the previous listed activity that we would be swimming at the other side of the road where the sea was and no one can actually stop us when it comes to swimming.

But there is more to do in the shore aside from just simply swimming. There's playing all sorts of games and also exercising but most of all, this one more - sea shell hunting.

Now after the playing at the sea shore, we also have one more thing to do, we hunt for seashells, edible ones by around four or five when the shore is already showing signs of those sea creatures. We also hunt for crabs, snails and other stuffs, we all would be bringing a fork to scratch the wet sands and a container to put those we have already caught inside. It was fun and we would be cooking it for dinner!

The best part is getting wet again after all the effort of scratching the sand. In fact, there's another set of competition in this part of the day as to who is able to get the most number of shells. Even to the point of who was able to get the containers to in full.

Buko is a Tagalog word for young coconut fruit.

This is one of the things that I would still do occasionally even up until these days minus the climbing and picking, I am left with just eating it. Living in a tropical country, there are lots of coconut trees everywhere and everywhere we go, even in the seashore areas, there are still coconut trees which are either abandoned or no one owns them so it seems for that those trees are gifts for each other!

The situation would go like this, we either do it ourselves or we would ask some adults to get us some young coconuts. But someone climbs the tree, those aren't really that tall, climb using the little cuttings in the coconut bark while holding on to the thick branches of the tree, get a bolo and the fruit would be dropped to the ground. That would be a very critical part because if the drop would be too hard, the fruit will end up getting broken and the buko water will become a waste. So each man who'll be picking up the young coconut should know how to drop the fruit without it breaking. We all know that is a hit and miss case but most of the time, we will get 80% of the picked young coconuts in good shape. There will always be broken ones.

The fruit will then be opened up, starting by opening a little whole on the side for the water. Sometimes we would drink straight from that opening. It's quite funny there were couple of instances where some aren't able to drink since the first few people would tend to consume everything in it. The coconut water is really refreshing, it is not refrigerated but it is cool.

But most of the time, we will be making this dessert so we have to save the buko water in a container and then we would scrape the inside meat of it, mix it with condensed milk and soda like sprite or royal orange and finally adding blocks of ice! It was the best treat for a hot afternoon!

10. Enjoy and Swim at the River all Naked

Aside from the salt waters, we also have another getaway during summer. This one is a bit farther compared to the sea but it is better because the waters aren't salty and there are rocks where we used to jump towards the waters.

We could stay here only for a limited time because there have been stories that the river is enchanted where in if someone is still in the river when it's past six in the evening, some fairy would be taking him or her to their kingdom and won't let him go back to the human world. I believe that our parents had just made up that story to frighten us so we won't stay up there late.

But another funny thing that I remember swimming in this area was when one time, my brothers and I went home all wet, of course we were from school then on our way home, we past our house and went straight to the river to swim. Mom was very mad that we were all being scolded and beaten using papa's belt, she told us we were not allowed anymore to go to the river, we promised we won't go anymore. But, the next day, we still went to the river together but we were smarter that time, we went swimming naked! We made sure not a single cloth that's wet as well as our hair, we made sure it's all dried before coming home. Mama didn't notice it and until now, she has no idea about it. That memory would still crack me up!

Don't get me wrong, I know stealing is definitely a sin. This is a bit shameful but it is true and I bet most of us had gone through this experience. Summer is also the time when trees are bearing and those fruits are super tasteful at the same time enticing. We have a lot of neighbors who got trees of mangoes, guavas, tambis and etc. We would often go to their area, one of us who is quick in climbing the tree would go up, one was a look out and the rest would pick up those the climber would pick from above the tree.

It's a bit scary but it was still fun. I know it is not good though, there were couple of times that we were caught but then the owner would just laugh at us and advised us not to do it again. My grandparents would tell us not to do it as we might be reported to the police.

Living in the province without gadgets and internet was not that bad at all, in fact it was a whole lot of fun to interact with human beings who were just like us, kids. I totally believe that my childhood had built self confidence, camaraderie between the children, friendly competition, it has developed skills and exercised our body as well as created memories which this generation I believe doesn't have which as well saddens me.

I hope all other children had experienced what I had when I was a kid. I know there are still parts here in the Philippines, the country where I am from is having this kind of life. I do wish that they won't also forget it and would also encourage the younger generation to keep their childhood electronics-less if possible.

All images credited to BatangPinoyKadekadaWorldwide via Facebook.com otherwise stated.