Sundance London: HITS: the most depressing take on fame seeking since The King of Comedy 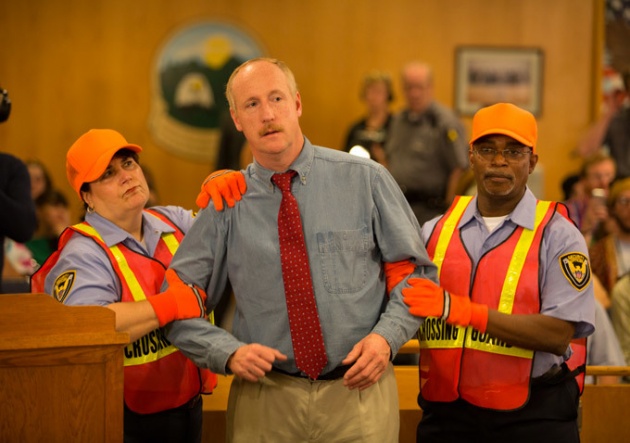 Early on in HITS, a dark but scarcely funny comedy from ARRESTED DEVELOPMENT creator David Cross, we see Julia Stiles as a woman who doesn’t know in which bin she has to put her now defunct kettle. Her presence underscores the theme of the movie, namely the fickle nature of fame. Stiles once headlined movies such as SAVE THE LAST DANCE and 10 THINGS I HATE ABOUT YOU, and co-starred opposite Matt Damon in THE BOURNE IDENTITY and its two sequels. Now, we hardly see her; Jennifer Lawrence grabs the parts that might have been sent to her agent. You know when fame has slipped away when you have to audition or else when the only offers are for theatre work. The heroine of HITS is Katelyn Stuben (Meredith Hagner), a girl who works in a restaurant in the small town of Liberty in upstate New York who dreams of being a famous singer. Obsessed with celebrity magazines, she sits alone in her car at a romantic spot, imagining herself being interviewed by Ellen DeGeneres.

HITS is a father-daughter story in which Katelyn’s pop, Dave Stuben (Matt Walsh, a Louis C K lookalike) also demands to be heard. It does not matter where Stiles’ character puts her kettle - Dave takes it home, his car bumping over a pothole in his street. Dave makes regular appearances at the town council to complain about pot holes, snow not being cleared from his street, rubbish, anything really. Like other complainants, he gets three minutes to make his case. He always overruns. ‘Where does it say in the constitution that we only get three minutes?’ he asks rhetorically. At his most recent appearance, he gets arrested. His daughter is concerned, but then re-focuses on her own search for fame. Pay $300 to a local guy, Julian (Jason Ritter) and she can have a professionally produced audition tape. Only Julian wants $500. No problem; Katelyn make up the shortfall by giving him a blow job. Katelyn naturally says no.

Meanwhile a local kid, Cory (Jake Cherry) blows hot and cold to her. You can see Katelyn almost appreciate the attention Cory gives her, but he’s too young, says insulting things and tries to act too cool for school. At the restaurant where she works, Katelyn’s co-worker tries to dampen her expectations, but Katelyn will not be deterred. Like daughter, like father.

In New York, an activist Donovan (James Adomian) hears about Dave Stuben’s council rants and decides to make him a cause celebre; by coincidence his dealer (Michael Cera) is the son of the councillor who gives Dave grief; disappointingly, nothing is made of this. He and two of his group travel to Liberty to promote Dave’s cause over the internet. However, interest in Dave accelerates like a wild fire, out of control.

As Dave’s home is besieged by reporters, Katelyn’s desire for fame gets more desperate. Donovan too feels his opportunity for building a movement is slipping from his grasp; it’s not the cause that’s important, but his group’s association with it.

Cross specialises in the comedy of embarrassment and some scenes are excruciating to watch, notably an extended set piece in a diner when a compliment paid to a tee shirt gets out of control; it recalls the ‘how am I funny’ scene from GOODFELLAS.  Some scenes score better than others, notably when Donovan and his group retreat to their hired Zipcar and he refuses to recognise the chair.

Ultimately, Katelyn is delusional; she wants to get on THE VOICE but doesn’t have the talent for it and when she performs her big number (in an unexpected but comically logical way) we see her limitations. Cross ultimately cheats to make a satirical point. For eighty minutes of the film’s running time, Dave’s rants are measured and local, but then he reveals his true colours and his onlookers, the liberals and the media, squirm.

HITS refers to those of the internet variety, registers of interest, likes and the like. Cross’ film is a sour portrait of small town life, probably the bleakest look at fame since THE KING OF COMEDY and similarly devoid of laughs. There isn’t a sympathetic character in the entire cast, even councillor Christina Casserta (Amy Carlson) is self-interested and spends public money looking good for the cameras. One of the satirical points Cross makes is that Dave never offers to help out when there is a public service deficit, for example by volunteering to help fill potholes. Instead he wants to be on the committee to direct others. We could be a better society if we were more civic minded; in the pursuit of the American dream such an idea doesn’t get a look in.

Film Review: OBVIOUS CHILD: A few birthing pains, but it gets better

I dont recommend arriving late for a screening of OBVIOUS CHILD. You miss (as I think I did) a stand…