Another peculiar quality of Swift's style is his perfect ease with which he could create by words the very mood humorous or grave, gay or cynical, profoundly misanthropic or playful and tender. Henry Crack says regarding Swift's style:

"..... Not certainly because of its finish or elaboration; not because it is without inaccuracy and minor incorrectness: but because it is an absolute by clear and direct, and moves with such perfection of ... and inimitable ease." 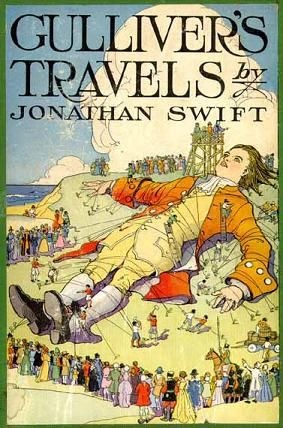 Jonathan Swift is perhaps the most remarkable satirist of his age. It is to be noted that the satirist is himself not involved. He is as much as observer, as much outside all the fuss and nonsense. Particularly in "Gulliver's Travels", in Swift's style nearly every type of satire is found either comic or corrosive. In Gulliver's first voyage, the voyage to Lilliput, there are numerous examples of comic satire as the passage dealing with the high-heels and low-heels and the Big-Endians and Little-Endians. The court's debate on how to dispose of Gulliver is savage and ironic, and belongs to the category of corrosive satire. In the 4th voyage, the corrosive satire reaches its climax and tends to be misanthropy.

Swift is master of irony almost of every type. In "Gulliver's Travels”, there are numerous examples of it. In second voyage to Brobdingnag, the lack of knowledge, says Gulliver, had produced many prejudices in the king and a certain narrowness of thinking in him. Gulliver's comment on the king's horror on hearing about the gunpowder is "a strange effect of narrow principles and short views!” According to Gulliver, the king suffers from "the nice unnecessary scruple". This is the masterstroke of irony as we know that it is the king whose views are sound and unbiased while Gulliver is the victim of prejudice and narrow-mindedness.

To conclude, we can unhesitatingly assert that Jonathan Swift is greatest among the satirists of his time regarding his style, his subject matter and sincerity of purpose. It is the opinion of Schopenhauer that style is ... of the soul, and Swift proves to be not only the greatest stylist in English literature of his age but also of coming ages.