PRINCIPLE OF STADIA SURVEY METHOD
The stadia method is based on the principle that the ratio of the perpendicular to the base is constant in all the similar isosceles triangles.
In actual practice, observations are made with either horizontal line of sight or inclined line of sight.
In the later case, the staff may be kept either in vertical position i.e. upright or normal to the line of s

let two rays OA and OB be equally inclined to the central ray OC. Let A2B2, A1B1 and AB be the Staff Intercepts at the three positions C2, C1 and C, respectively. Now

This constant k entirely depends upon the magnitude of the angle β.

Multiplying throughout by f.f1, we get    f1 = f 1/f2*f+ f
Substituting the values of
f1/f2 = S/i
f1=S/i*f+f
Horizontal distance between M and the staff is D = f1 + d
D = f/i S + (f + d) = k S + C
therefore, the staff intercept S is to be found out by subtracting the staff readings of the top and lower stadia hairs.
The constant k = f / i is known as the MULTIPLYING CONSTANT or Stadia Interval Factor and the constant f + d = C is known as the Additive Constant of the instrument.
Determination of constant k and C

In this method, the Additive Constant C = f + d is measured from the instrument


The distance d between the instrument axis and the objective is variable in the case of external . It should, therefore be measured for average sight. Thus, the Additive Constant f + d is found out.
To calculate the Multiplying Constant k: Measure a known distance D1 and take the intercept S on the staff kept lat that point, the line of sight being horizontal

For average value, staff intercepts, S1, S2, S3 etc., can be measured corresponding to the distance D1, D2, D3 etc., then the mean value is calculated.
Note: In case of external focusing telescopes, the eye-piece-diaphragm moves during the focusing. So, for such instruments, d remains the constant and does not vary while focusing.
Second Method:

In this method, both the constants are determined by the field observations as under:

Measure a line about 200 m long, on fairly level ground and drive the pegs at almost equal interval, say 50 meters. 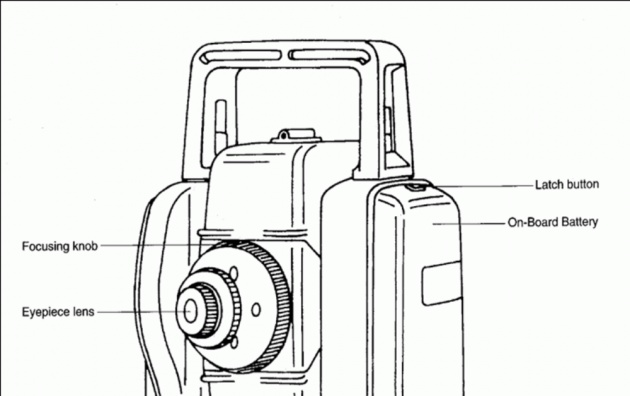 TACHEOMETRY
Staff is held vertical and Line of Sight is inclined to it i.e. LOS< staff
Inclined sight with vertical staff:

A, C, B = Points corresponding to the readings of the three Stadia Hairs

L = Length MC measured along the line of sight

V = Vertical Intercept at Q, between the line of sight and the horizontal line

Thus the equations (1) and (2) are the formulas to find out the horizontal distance D and elevation V for the inclined line of sight. 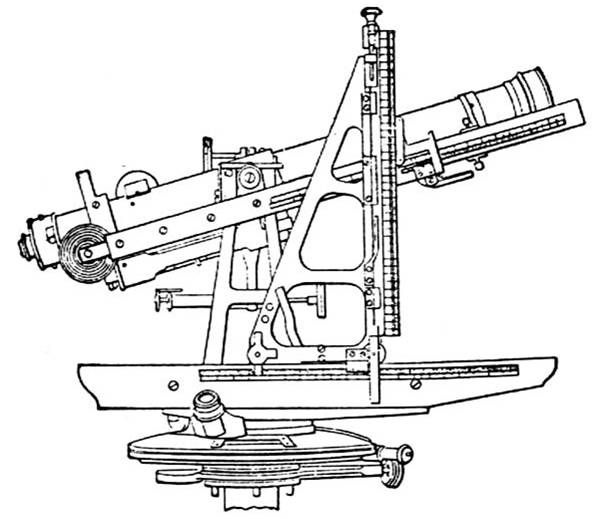 As the telescopes mostly used in Tacheometric Surveying are the External Focusing Telescope with anallatic lens, and the Additive Constant C is taken as zero in this type of telescopes. So, whole the term Ccos becomes zero in the equation of D = kS.cos2 + C.cos
So it becomes D = KScos2   [In internal focusing telescope, the term Ccos becomes so small that it can be neglected, hence making the above equation same as D = kScos2 and V = ½(kSsin2)
Elevation of Staff Station for Elevated Angle i.e. Elevated LOS:
E = RLEq.St + h + V – r

Reduced Level (RL or R.L): It is the height or depth of a point above or below a Datum. Generally, Reduced Level is known as Elevation of a point.
Datum: It is any level i.e. elevation of a surface with respect to which the levels i.e. elevations of other points or surfaces are measured or referred to. These are usually the Mean Sea Level (MSL) or Bench Mark (BM) or any arbitrary point or surface of known elevation.

Case (a): When the Line of Sight is at an elevated angle of Ө:

With the same notations , we have:

So, until now the leading (natural) explanation of the strange light-curve has focused on the possib…

full moon from last night, taken through my telescope.

Wow, you can really zoom in on that image. The Maria are giant lava fields. The lava flowed over the…