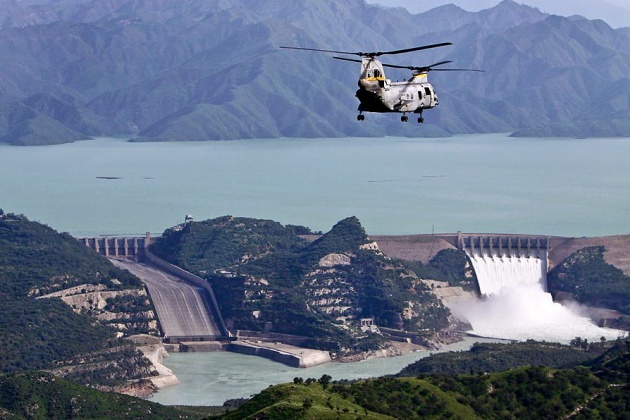 tarbela Dam (Urdu: تربیلا بند‎) on the Indus River in Pakistan is the largest earth filled dam in the world and 5th largest by structural volume.[2][3][4] It is named after town Tarbela located in between two districts (Haripur District andSwabi District) of [5] Khyber Pakhtunkhwa, about 50 kilometres (31 mi) northwest of Islamabad, near Topi. The dam is 485 feet (148 m) high above the riverbed. The dam forms the Tarbela Reservoir, with a surface area of approximately 250-square-kilometre (97 sq mi). The dam was completed in 1976 and was designed to store water from the Indus River for irrigation, flood control, and the generation of hydroelectric power.[6] 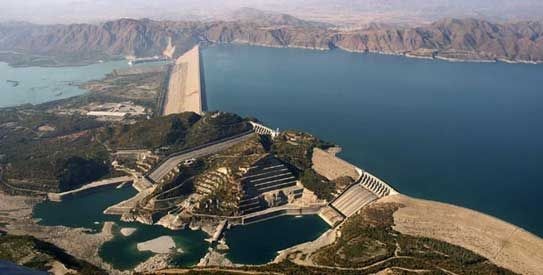 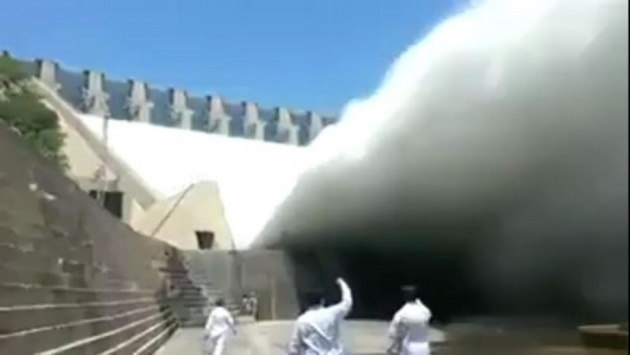 Tarbela Dam
The project is located at a narrow spot in the Indus River valley, atTarbela in Haripur, shortly located at the point from where the District Swabi then starts. Here the river formerly split around a large island close to the left bank. The footprints of Tarbela can be traced back to British Indian times when the river and the small natural reservoir was in use in one way or other.The main dam wall, built of earth and rock fill, stretches 2,743 metres (8,999 ft) from the island to river right, standing 148 metres (486 ft) high. A pair of concrete auxiliary dams spans the river from the island to river left. The spillways, located on the auxiliary dams, in turn consist of two parts. The main spillway has a discharge capacity of 18,406 cubic metres per second (650,000 cu ft/s) and the auxiliary spillway, 24,070 cubic metres per second (850,000 cu ft/s). The outlet works are a group of four tunnels that have been cut through the valley wall at river right, for uses of hydropower generation and flow control. These tunnels were originally used to divert the Indus River while the dam was being constructed. Most of the Machinery Installed in the project was imported from Italy and other foreign Countries by the efforts of a Rawalpindi-based famous Pakistani Businessman Muhammad Ahsaan who was also the Procurement Manager of the project. MA hydroelectric power plant on the right side of the main dam houses 14 generators fed with water from outlet tunnels 1, 2, and 3. There are four 175 MW generators on tunnel 1, six 175 MW generators on tunnel 2, and four 432 MW generators on tunnel 3, for a total generating capacity of 3,478 MW. Tarbela Reservoir is 80.5 kilometres (50.0 mi) long, with a surface area of 250 square kilometres (97 sq mi). The reservoir holds 11,600,000 acre feet (14.3 km3) of water, with a live storage of 9,700,000 acre feet (12.0 km3). The catchment area upriver of the Tarbela Dam is spread over 168,000 square kilometres (65,000 sq mi) of land largely supplemented by snow and glacier melt from the southern slopes of the Himalayas. There are two main Indus River tributaries upstream of the Tarbela Dam. These are the Shyok River, joining near Skardu, and the Siran River near Tarbela. 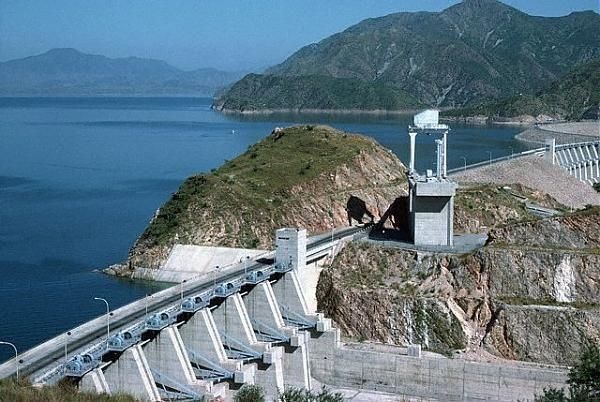 Settlement of Tarbela Dam Effects[edit]
It has a reservoir area of about 260 square kilometers and about 82,000 acres land was acquired for its construction. The large reservoir of the dam submerged 135 villages, which resulted in displacement of a population of about 96,000 people.[7]For the land and built-up property acquired under the Land Acquisition Act of 1984, a cash compensation of Rs 469.65 million was paid to the affectees. In the absence of a national policy, resettlement concerns of the affectees of Tarbela Dam were addressed on adhoc basis. 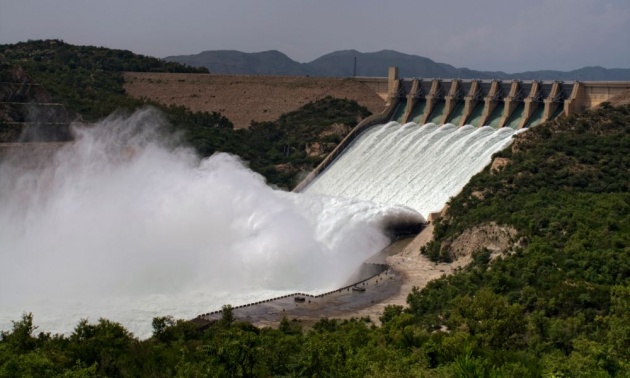 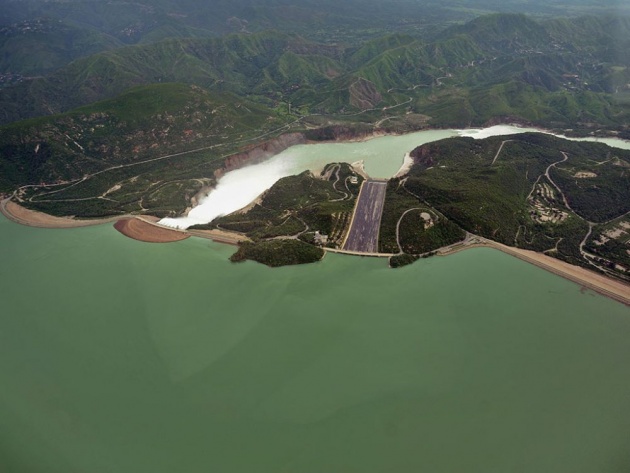 Many affectees of the Tarbela Dam have still not been settled and not been given land as compensation by the Government of Pakistan, in accordance with its contractual obligations with the World Bank.[8] However, some of the affectees have been settled at Khalabat Township and other places across Pakistan.

Lifespan[edit]
Because the source of the Indus River is glacial meltwater from the Himalayas, the river carries huge amounts of sediment. The annual suspended sediment load is about 430 million tons. This means that, over time, the reservoir will fill. The useful life of the dam and reservoir was estimated to be somewhere around fifty years, since the dam's completion in 1976, meaning that the reservoir would have been full of sediment by 2030.

Live storage capacity of Terbela reservoir had declined more than 33.5 per cent to 6.434 million acre feet (MAF) against its original capacity of 9.679 MAF because of sedimentation over the past 38 years.[9]

However, sedimentation has been much lower than predicted, and it is now estimated that the useful lifespan of the dam will be 85 years, to about 2060.[10] 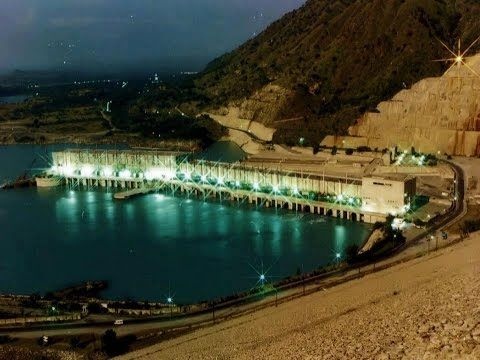 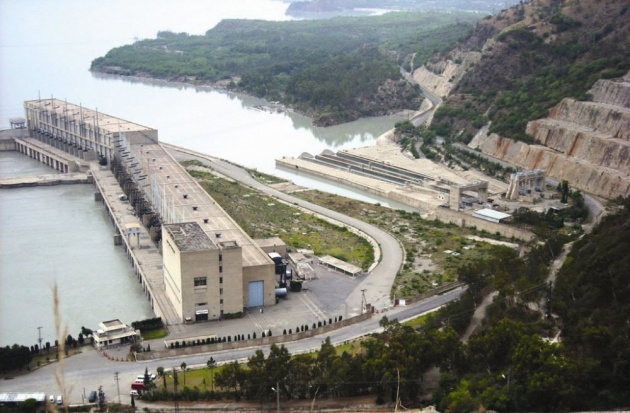 Project Benefits[edit]
In addition to fulfilling the primary purpose of the dam. i.e. supplying water for irrigation, Tarbela Power Station has generated 341.139 Billion KWh of cheap hydro-electric energy since commissioning. A record annual generation of 16.463 Billion KWh was recorded during 1998~99. Annual generation during 2007~08 was 14.959 Billion KWh while the Station shared peak load of 3702 MW during the year which was 23.057% of total WAPDA System Peak.[11]

Tarbela-IV Extension Project[edit]
In September 2013, Pakistan's Water and Power Development Authority signed a Rs. 26.053 billion contract with Chinese firm Sinohydro for executing civil works on the 1,410 MW Tarbela-IV Extension Project.[12] Work on the project will be completed in three & half years at an estimated cost of $928 million.[13] In June 2013, the World Bank had agreed to provide a $840 million loan for the project.[14]

The T4 project is being constructed at Tunnel 4 of the dam which was originally intended for irrigation, but was later taken up for power generation as country’s electricity demand increased.[9]

On completion, the project will increase the generation capacity of Tarbela Hydropower Station to 4,888 MW from the existing 3,478 MW after installation of three units of 1,410 MW on Tunnel No 4.[12][15] and add about 3.84 billion units cheap electricity to Pakistan's national grid per year. Annual benefits of the project were estimated at about Rs. 30.7 billion.[13]

This project is under the guidance of Project Director: CE Sohail. 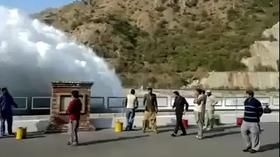 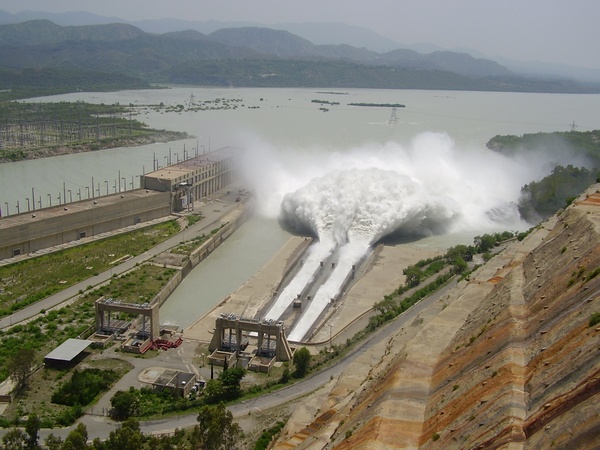 The original T4 project was estimated to cost $928m, but the project authorities had been able to conclude the project contract at $651m. Since the project cost was much lower than estimates finalised in consultation with the World Bank ($840m), the bank not only approved $51m acceleration programme, but also agreed to divert about $150m, saving another 1,400MW for Tarbela 5th Extension project which is expected to be completed by June 2018