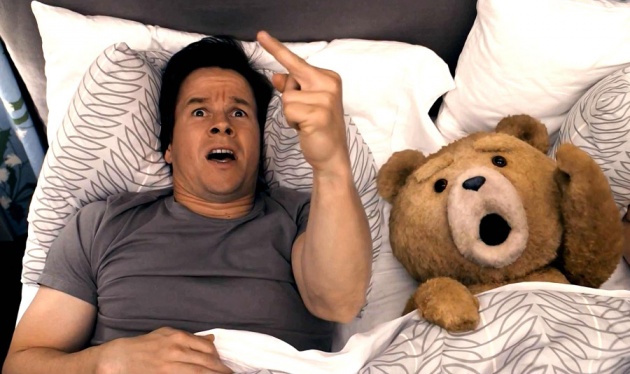 Ted is the new and first film from Family Guy creator Seth MacFarlane. This film is loud, obnoxious, rude, ridiculous, borderline incoherent, and incredibly filthy. It’s one of the most ridiculous concepts I’ve ever seen for a live action film. The film however knows how ridiculous it is and exactly what it is. It knows it’s not highbrow comedy, and it never even attempts it. It’s just funny puns and ridiculous situation after ridiculous situation, and it completely works.

The story focuses on a man-child named John (played by Mark Wahlberg), who in his youth wished for his teddy bear to come to life and miraculously did. Ted (voiced by Seth MacFarlane) becomes a national sensation, but his 15 minutes of fame eventually go away, and after 30 years becomes a perverted, lazy stoner. John now has a girlfriend named Laurie (played by Mila Kunis), who is sick of Ted’s antics, the breaking point being a series of prostitutes soiling their house. Ted must move out and support himself, but John continues on his downward spiral in life with Ted leading him.

The film is more or less an extended episode of Family Guy, and good Family Guy at that which has become increasingly rare these days. There are a ridiculous number of pop culture references squeezed in any and every part of the film that they can make room for. There are also similar throwaway gags like there are in Family Guy, but like early Family Guy, they tend to have something to do directly with the plot.

With all this said, the movie does have true heart. The third act pretty much goes in the same direction as most Judd Apatow films do, in that it’s not as funny as the rest of the film. It’s still good, especially when it goes into the territory of Ted having a stalker, but its necessary for us to actually care about the characters and not just their ridiculous gags and situations.

This film is not comedy gold, but it is certainly great for a few laughs. Films this ridiculous and self-aware don’t come across very often. Fantastic film just to help you escape for the afternoon.