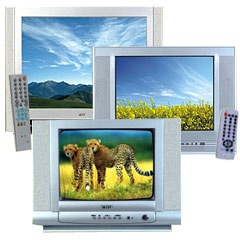 In today’s lecture we will discuss about the “Television Reception” and the “Color Television”.

As we know that radio receives signal in its Arial, in the same way television receiver picks the signal from its antenna. Composite (audio and Video) signal are received on TV antenna, video signal is separated from the audio signal and led to the cathode-ray tube as a serious of electrical impulses, similar to those that left the camera at the television studio. Electron Gun operates in tube like the Gun in the camera to scan across a fluorescent screen.

The electron beam strength varies with the strength of signal. As the electrons strike the surface of the fluorescent screen, they make it light up with a pattern of rightness that also depends on the signal strength. The electron beam scans the screen of the cathode-ray tube at the same rate as and in step with the beam in the television camera and a picture is created on the screen of the television receiver which corresponds to the scene focused on the plate in the camera.

In the beginning only black in white television were used, after the advanced in technology Color Television invented. The system described above gives only patterns of brightness and darkness and hence a monochrome picture. A color picture may be transmitted and seen by using various quantities of the three primary colors Red, Blue and Green. These three colors taken in the appropriate combinations and strengths will provide nearly all the colors seen in nature.

Color television uses above mentioned three separate signals, one for each of the primary colors. The lens system of the color camera splits the image by means of filters into three. These are passed into three separate camera tubes the produce output signals corresponding to their, colors.

Cathode-ray tube had three electron guns in color receiver. One gun receives the signals for red, one for blue and one for green. The fluorescent screen is coated with thousands of tiny spots of phosphors in groups of three. In each group, one phosphor produces red light, one blue and one green. A shadow-mask behind the screen has holes so lined up that the beam from each electron gun hits only its appropriate color phosphor. The result is, or should be a true color representation of the original scene.

Image Credit: Fox via Wikipedia "The Archaeologist in the Cocoon" is episode eleven of season eight …

Image Credit: Fox via Wikipedia "The Diamond in the Rough" is episode ten of season eight of Bones, …