Bernard Vorhaus' "The Spiritualist" aka "The Amazing Mr. X" (1948) plays the opening titles over moonlit waves crashing ashore. The ocean lies serene yet greets the shore with turbulence. The main character Christine (Lynn Bari) is introduced to us as a woman possibly on the verge of being engaged to a loving man Martin (Richard Carlson) and yet still in love with her thought to be deceased husband Paul (Donald Curtis). To make matters more muddled for Christine, she hears Paul calling her from the ocean, sees her wedding dress fly around her room and meets a stranger on the moonlit beach who knows all about her and claims to be something of a fortune teller named Alexis (Turhan Bey). All the circumstances and happenings are dumped out pretty quickly and the remainder of the film fills the viewer in to the mysteries. 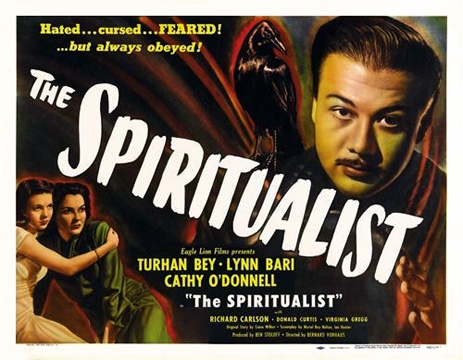 The direction of Bernard Vorhaus and cinematography by John Alton combine to create a great atmosphere of noir-ish mystery in "The Spiritualist." In the scenes where Christine is beckoned to the ocean by the voice of her supposedly dead husband, the camera work and lighting convey a dream-like aura that Christine must be experiencing. Although Martin may be seen as the hero of this film for hiring a magician turned private investigator of fortune tellers and the like, and ultimately uncovering the plot of Alexis, this film felt like a film noir to me with the stereotypical gender roles reversed. I felt that Christine and, to a lesser extent, sister Janet (played by Cathy O'Donnell) were the protagonists of the film with men being their undoing. Let's call Alexis the homme fatale! 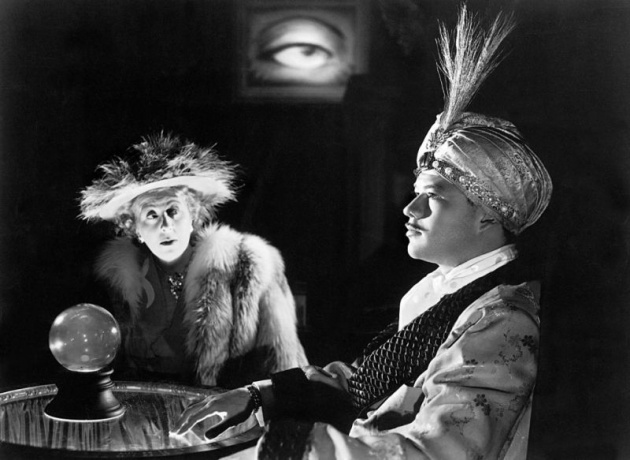 The most interesting character by far is Alexis. Turhan Bey does an excellent job as the suave swindling swami dressed fortune teller. Turhan Bey was an Austrian born actor who escaped Nazi occupied Austria in 1940 with his Jewish mother to arrive in Los Angeles. The accent, his good looks, and pencil mustache fit the role to a tee. Alexis also seems to have a pet raven which is the ultimate prop for his character. Although Bey creates an awesome Alexis, whom we know to be crooked, there is still room to believe that this handsome, almost boyish, man who regularly engages in elaborate schemes attempting to defraud wealthy widowed women of their fortune, somehow has a soft spot. When Paul turns up with his even more sinister plot (and murderous!) and attempts to rope Alexis into it, I was holding out hope (eventually not so misplaced) that  Alexis might not be so bad. Dubbed the "Turkish Delight" by fans, Turhan Bey is the star of the show. 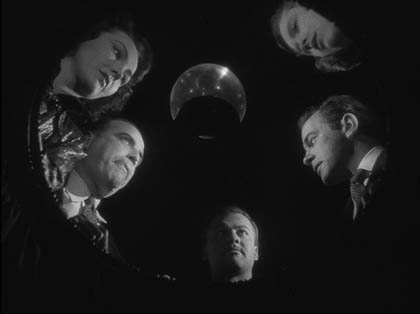 "The Spiritualist" was released by Eagle-Lion Films which was considered a major-mini studio, one of the most respected studios on 'Poverty Row,' and was know during its short life as a studio that attempted to compete with the major studios by making movies that had everything the majors' movies did except for the A-list actors. Cinematographer John Alton also shot a few of Eagle-Lion's classic film noir releases like "He Walked By Night," "Raw Deal," and "T-Men." The director Bernard Vorhaus directed some 30 other films but was also a victim of political sorts when he was blacklisted as a result of Joe McCarthy and HUAC in 1951. Vorhaus had a made a career of being independent and working with smaller studios. It's hard to think of anyone working independently in the studio contract dominated Hollywood of that time, but Vorhaus did it. I've got a few more film noir and many more B movies from a bygone Hollwood at Baxter Martin Webtv. "The Spiritualist" is worth a viewing for any fan of film noir!