The Art of Concert Films

Going to a concert can be a great experience. The lights, the crowd, the vibe, the great music vibrating out of humongous speakers.

But what if you can’t make it to the gig? Maybe you’re working that night. Maybe you can’t afford the tickets. Well, there’s always concert films. Not the same thing, you say. I beg to differ.

Concert films are one of the most underrated genres of filmmaking there is. A good concert film can be an uplifting, rocking experience. It can take you there, with the crowd. It can put you in the best seat possible, right there before the stage; closer than you could ever get with the real thing.

And, now, more than ever, with High-Definition (HD) and DTS technologies, you can replicate (almost) the experience of being there at the concert of your choice, again, and again. All you have to do is insert your DVD or Blu-Ray disc into your drive, and voila.

There are some great examples of the form, many of them made by renowned filmmakers such as Martin Scorsese (Gooodfellas, The Departed) and Jonathan Demme (Silence of The Lambs, Philadelphia).

Scorsese’s concert film, The Last Waltz (1978), chronicling the last concert of The Band, is considered to be one of the best of its kind. With great camerawork, guest appearances by the likes of Bob Dylan and Muddy Waters, the film stands the test of time, and, now, with the remastered version available on home video, it looks and sounds better than ever.

There is also Demme’s Talking Heads: Stop Making Sense (1983). Considered by many to be the “Citizen Kane” of concert films, this is one of the best examples of its kind. Thanks to David Byrne’s stage antics, brilliant staging, some of the best musicianship ever captured on film, and Jonathan Demme’s less is more approach, Stop Making Sense set the bar for the genre, and, to this day, is unparalleled in terms of capturing the energy of a live performance for the screen.

But there are also other, relatively lesser-known concert films out there that deserve more recognition. Prince’s Sign ‘O’ The Times (1987), directed by the man himself, is a great slice of 80’s extravagance. Prince, arguably one of the best musicians on this planet, and one of the most eccentric, captures his own brand of neo-psychedelia for this film, which features live performances of some of his best-known songs, as well as cult favorites off his then new release, Sign ‘O’ The Times.

There’s also Anton Corbijn’s film, Depeche Mode: Devotional (1993), a record of Depeche Mode at one of their finest moments, performing a concert to promote one of their most critically-acclaimed albums, Songs of Faith and Devotion. With stylistic lightning, stunning rear-projected images, and lead singer Dave Gahan’s mesmerizing stage presence, you get a stunning concert film.

So what makes some concert films so great? The answer is simple. It’s all about the music. If the artist or band is good, can deliver a rousing performance on stage, chances are this intensity will show on screen. There are some terribly shot concerts out there that are still able to show the talents of the performers, despite technical limitations and poor directing.

But if you combine a riveting performance with a good, or great, filmmaker, the results can be stunning. As is the case with all the examples cited here. The above-mentioned filmmakers manage to stylize those performances, using carefully chosen camera angles, and crisp, energetic editing, all in an attempt to transfer that live energy to the screen.

So, next time you can’t make it to a good gig, just turn on your disc player, switch on the TV, and enjoy the show. 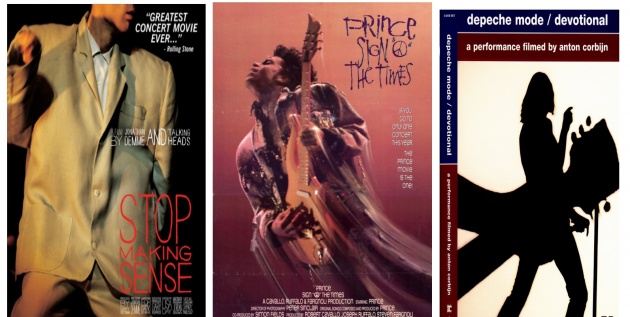