The Bayern crushed a strange Barcelona in Germany

The Bayern crushed a strange Barcelona in Germany.

The Germans were far superior and won for 4  X 0, a game to forget, with a poor performance of Messi. The Catalans must achieve a miracle in the rematch to reach the final.

Messi returned to play with no action.  Few would have imagined when the clock struck 15 : 45 when the match begin between Bayern Munich and Barcelona, in Germany for the first leg of the semifinals of the Champions League. But 90 minutes later, the scoreboard said so: the home side won 4-0 and made it very difficult and taken to the edge of miracle to the Catalan team ahead of the rematch, on Wednesday May 1, at the Camp Nou. 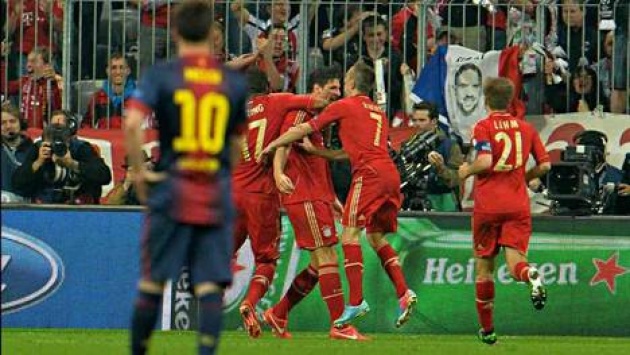 At stake was a place in the final of the Champions League, the most important competition in Europe. And it showed from the prior in the first match between Bayern Munich and Barcelona. An example of this, on the side of Tito Vilanova, was that Lionel Messi finished his recovery and was available to play as a starter. So, with Flea on the attack, the Catalans dominated the action at the start of the first half at the Allianz Arena German but lasted only a while that onslaught of the visit. Although Barcelona stood resolutely on offense, did not generate the danger did cause the premises. Just 2 minutes, Javi Martinez taco enabled to Robben, who defined before the departure of Victor Valdes, who got the ball. That action was not isolated: responding to a clear pressure Bayern Munich at the start of the Spanish team , to the point that both Messi and his teammates in attack, Pedro and Alexis Sanchez, had to go to the middle of the court to transfer the ball.

To make matters worse, after 15 minutes, Lahm tested on goal and the ball hit Pique's hand and went to the corner. , the referee took the Germans broke criminal . Something similar was repeated fifteen minutes later when at 32 Alexis Sánchez played with his hand inside the area center. By then, the protest was less airy: is that after 24 minutes, the place was despite air power and with two headers in the area made the 1-0 . The first was to Dante, who sent the ball to the back post where Müller appeared to score the first and make all Munich delirious.

What did the Barcelona in the first half does not deserve the partial defeat? Shortly. At Vilanova team noticed pressure uncomfortable with Bayern . His figure against PSG, Messi, never got comfortable nor had chances to hit the goal. Thus, the clearest and the Argentine Barsa was at 29 minutes when the Rosario did not hit a pass from Pedro.

The halftime break did not play for Barcelona, although the first situation the generated from a heads of Iniesta, whose shot was saved by the keeper, but it was invalidated by a Spanish non-existent offside. Local happens that hit fast and hard . After 4 minutes, a new air hub finished a new goal for Bayern Munich. Müller lowered from the right corner at the far post and poured Gomez goal that defined his left foot to make it 2-0. Again the controversy surrounding the referee and the line, which saw the striker was just ahead !

Barcelona did not react to the goal, while the place was a whirlwind . After 6 minutes, Müller had a chance, after a solo run, while it lost 9 Ribery Robben after enabling in a spectacular play of Dutch, taking the ball from right to left in front of the area. Just three minutes later, the 10 of Bayern sent a header just out in a new ball stopped against Barca. No fail shortly after, at 27. Barcelona off the crossbar and Ribery a counterattack. He played center for Schweinsteiger, who saw Robben rose on the right. The Netherlands midfielder then was encouraged to Jordi Alba, and surpassed it as the players of the Catalan team asked for a fault on a lock on the Barcelona defender inside the area maiden by Müller and Robben defined escaped and left-footed cross to make it 3-0.

The situation was even more serious when the 30 Bartra was lost the pacience (had time to stop the ball but turned and defined over the bar), since an away goal is key to Barca often delude with comeback in the Camp Nou next week. The comeback was forgotten almost ten minutes from time when Valdes saved the fourth to cover her a shot to Müller.

The goalkeeper could not stop a minute later: after a cross from Alaba, the German striker, this time, he won back Jordi Alba and defined between the defender and Valdes to put the final 4-0 . To make matters worse, the impotence of Barcelona was evident in the yellow infant Alba pulled him by throwing the ball in the face of Robben, thus losing the rematch, where the Spanish team will improve and fundamentally be lethal against a team which drew a huge distance and confidently come to the Camp Nou.

The Barcelona defence was terrible and the goalkeeper on the first goal has the ball near the hands to defend but cant do it and on the second goal he doesnt know where to stand when the ball was in the air. I think that Barcelona deserves a better goalkepper and positioned of the defence inside the small area that is where the team of Bayern of Munchen did all the goals.

Messi really had a lot of defensors in him and he cant run, only made some passes without any conclusion to the goal. we just see only one team playing today with confidence to get to the finals, now we have to wait for a miracle on the back game is Barcelona.