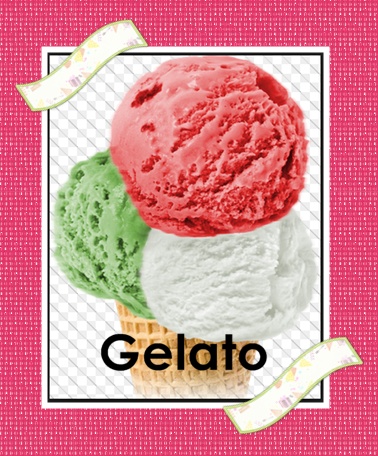 Philippines is known as a tropical country. Here, We only have two seasons which are known as the wet season or the rainy season and the dry season which is more known as summer (but the most appropriate name is Dry Season). Because of having only two seasons, the time for each season takes long than those countries that are having four such as winter, spring, summer, and autumn. Since, we are experiencing long dry season here in the Philippines, Filipinos are more likely to eat cold deserts that is why I am amazed to know another dessert that I will surely love if ever I have the chance to try that. This dessert has been featured to the BitLanders survey chats and I will going to discuss all about that dessert on this blog. 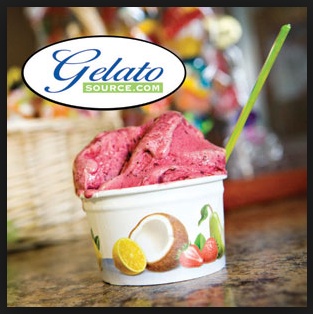 What is bitlanders survey chats 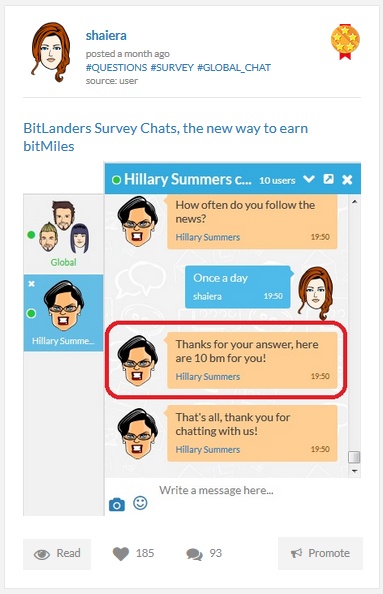 Survey chats became a double rewards topic a month ago and because of that, some of the great bloggers in bitlanders shared their ideas about this,  and also I,  even though I am not that good in writing blogs, I also shared my insights about survey chats. Here, I compiled the 5-star blogs of some bloggers in order for you to understand it well and to know how to participate to bitlanders survey chats. Those are listed below.


Aside from the blogs,  here is a video on how  this survey chats work, this video is made by my one of friends here in bitlanders namely ShaArc. Check this out.

Why should we participate to the Bitlanders Survey Chats? 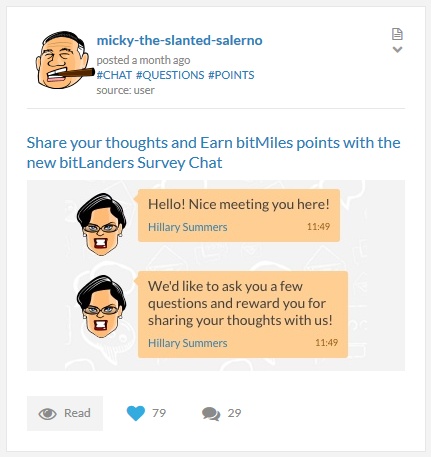 A blog from sir Micky, entitled Share your thoughts and Earn bitMiles points with the new bitLanders Survey Chat

As I have said a while ago,  survey chats give us the opportunity to earn more bitmiles, it can help you to earn more bitmiles especially  now because they increased the bitmiles that we will earn for each answer that we will provide.  Before, for each answer,  we only earn 10 bitmiles, but now,  they have increased it for every answer like the picture below.

Aside from earning more to this survey chats, you will be encourage to participate to this because the questions are very much updated to help us learn. And now, I will tackle about one of the questions and topic to the survey chats that you will surely love to try, the Gelato. 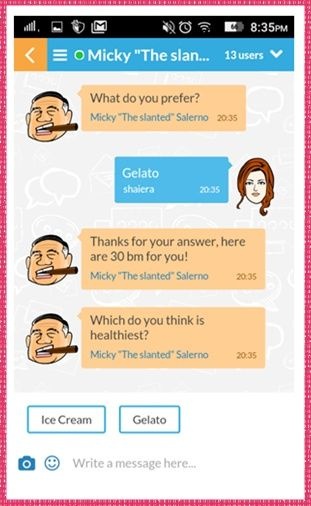 A picture from my gallery Survey chats about gelato

Since it is summer here in the Philippines, (seriously, it is very hot here nowadays) I am very much fascinated to try and eat cold delights like ice cream, halo-halo (one of the best Filipino delights that is best during summer) , mais con yelo and many more. I really like trying every food that is cold during summer to ease this thirsty for this very hot weather and to feel fresh as well. Along with different desserts that I have already tried before, a new dessert have been introduced to me.

While chatting with the chat bot of sir Micky "The slanted" Salerno, he asked about Gelato. That is the very first time that I encountered that word, so, I do not have any idea about that, but through out that survey chats, and the trivia that the chat bot of sir Micky gave, I started knowing this ice-cream-like dessert that is originated from Italy. Here are the information that the bitlanders survey chats have provided, check on the images below. 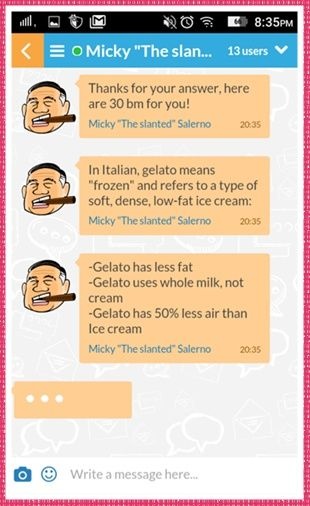 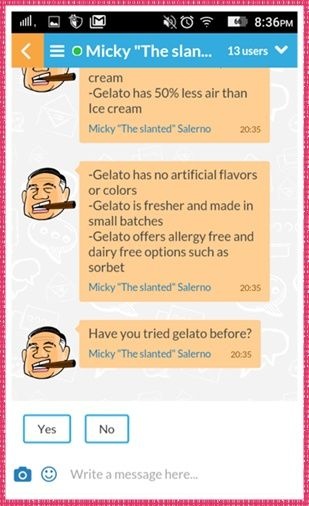 What is gelato and how to make a gelato?

According to what I have researched and from the trivia that sir Micky gave, Gelato is an Italian version of ice cream, but there are some differences between the two frozen delights. Gelato is made more healthier than ice cream and when it comes to its taste, gelato have more different textures than a normal ice cream  because it contains more milk and the process from making it serves to make this gelato appeared with out more air or no air at all.

Like other desserts, the process of making gelato has evolved, for you to have a good insights about making this, if ever you want to make your own gelato, you can visit this site -> How is Gelato Made?

Why to choose Gelato instead of ice-cream? 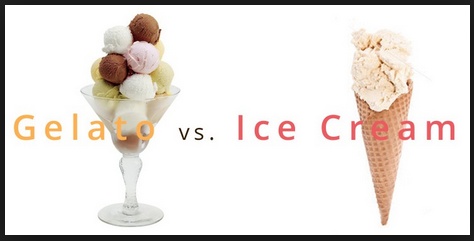 I haven't tried eating Gelato because as much as I know, gelato is not that popular here in the Philippines and I really don't know if we have here a store that is selling products like gelato. Based to what I have understand, Gelato is also like an ice-cream wherein it is also cold, delicious to eat and having also flavors that are available in ice cream. Both are almost like the same but why we should choose gelato instead of ice cream? 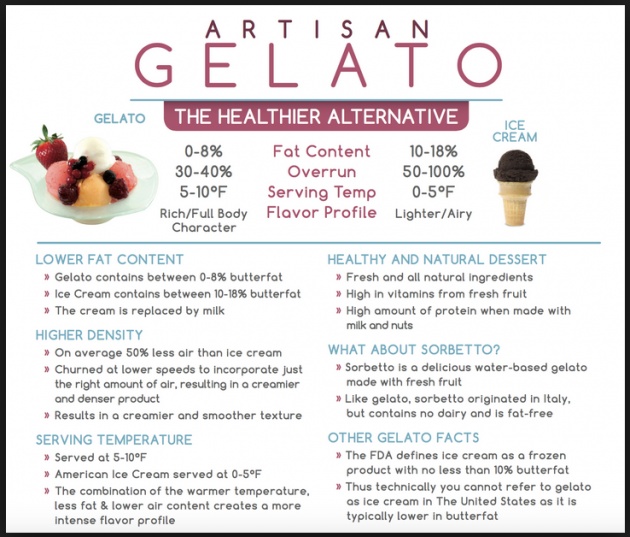 As what you can see, ice cream and gelato are almost the same, but gelato is more advisable to eat than ice cream because it is more healthier. To be more specific, gelato is like an ice cream in appearance but gelato has a higher proportion of milk and lower proportion of cream and eggs or some times, no eggs at all. Perhaps, Ice cream and gelato contain milk and cream but gelato has relatively less cream and more whole milk and it is also  has very low percentage of fat than ice cream. Gelato is produced from nuts and fruits and just like ice cream, it also contains artificial flavors such as chocolate, pistachio, vanilla, coffee, yogurt and many more. Ice cream contains more fat because of eggs and more cream than milk. Gelato has no eggs or sometimes it has eggs but less than ice cream. This is what I have learned from the survey chat with sir micky about gelato.

Which do you prefer, ice cream or gelato?

I am a girl who is very much love eating an ice cream, no doubt because I already tasted almost all flavors of ice cream that are available here in the Philippines including that chili ice cream. I can say that ice cream is good enough to ease this thirsty feeling during summer and to have a fresh feeling after eating, but if there is a chance that this gelato will be available in my beloved country, I would surely go for gelato. Since I have already gave you an clear insights about the differences of these two yummy dessers, I am now sure that you already got my point,prefer gelato than ice cream because though this blog, it is easy to understand that gelato is healthier.

this are the points to be consider why gelato is better choice than ice cream, these are the specific explanation of all. We get almost half the calories in gelato than same amount of ice cream. Gelato is not famous only for being relatively health but also more tasteful because it is denser and because it is denser, the flavor of gelato is more tasteful. If we will consider our health choosing to gelato instead of ice cream will be beneficial. So what are you waiting for? try it out!

As of now, I am just on high to eat this kind og dessert, I really want to taste and try it to share my eating experience of gelato. I am hoping to try it and if ever that happened, I will give you another shot of blog that probably encourage you to try this gelato. Done for Gelato, what's next?