The Death of Blackbeard 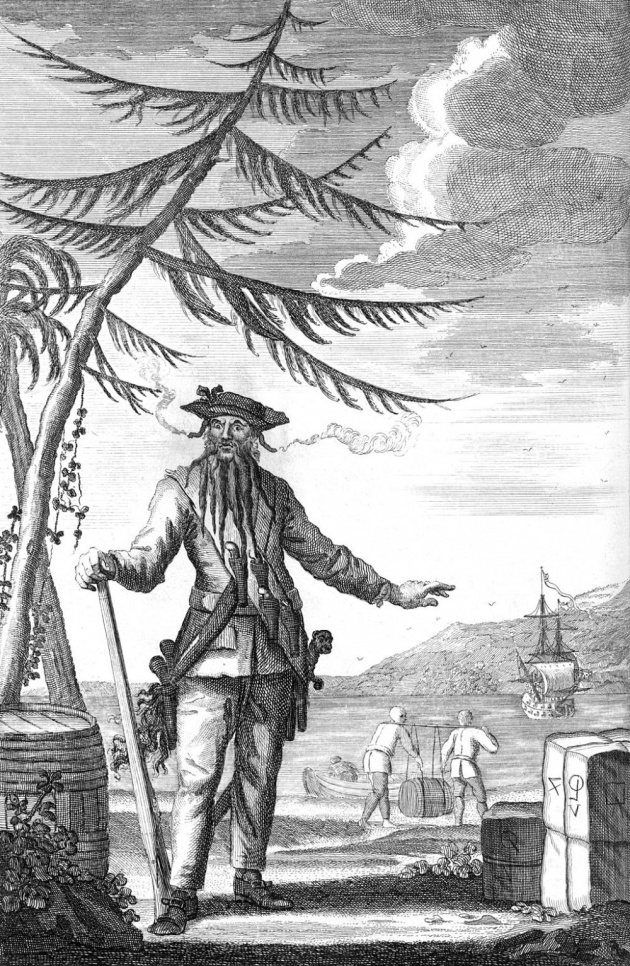 On 22nd November 1718, Edward Teach, better known as the pirate Blackbeard, was killed.

Teach was born in England, probably in the region of Bristol. His early life is largely unknown, although he was possibly a privateer (a pirate licensed by a government to prey on the vessels of an enemy nation).

Blackbeard's most famous ship was the Queen Anne's Revenge, a renamed French merchant vessel which he captured. After ransoming the port of Charleston in South Carolina, after successfully organising a blockade with other pirates, he later settled down and was granted a royal pardon.

When he took to the pirate life again, the Governor of Virginia set a force of soldiers and sailors after him. Blackbeard was killed in combat by Lieutenant Robert Maynard.

Teach was not the tyrannical and bloodthirsty figure that pirates are so often depicted as.

Image: By Joseph Nicholls (fl. 1726–55).[1] Although James Basire (1730–1802) is attributed as the engraver based on the signature “J. Basire”, unless he engraved the item at the age of 6, it is likely his father Isaac Basire (misreading of initial?) or another J. Basire. [Public domain], via Wikimedia Commons (commons.wikimedia.org/wiki/File:Edward_Teach_Commonly_Call%27d_Black_Beard_(bw).jpg)

Animal Pirates by, Cobalt Foxx E-book: $1.00 (FREE with Softback) Softback: About: Terrance Ivy is a…

(Image source: Wikipedia.org) Now that the Holidays are almost over, as early as now, many people ar…

Hugh Jackman to star in "Pan"

Good news for Hugh Jackman fans that wanted to see him in the fantasy film Pan, Warner Bros. has jus…