Our land, which is called a planet, is filled with amazing, beautiful and exciting places. Such abnormalities are hidden in the earth that there is a sense of wisdom. Some of its mysteries are such that they still cannot be determined in this world of development and progress just like mysteries of Bermuda Triangle and Pyramids of Egypt etc which are still unknown. There are various ideas about them, but scientists are unable to explain their interpretation.

The mysterious places present at the surface of the earth are on one side but there are many other mysterious places inside the earth which are worth interesting. Especially, those places in which human hands were also involved. Today, I will take you from the ground level to its inner center and let you see what things, places, and scenes are waiting for us. In short, I will explain both the deepest areas ever found on earth or made by humans in this short article.

Allah Almighty says in the Quran:

Every soul will taste death

Death is a bitter truth, from which, escape is not possible and according to the meaning of Hadith:

They are those who remember death most often and are well-prepared for what is after it. Verily, those are the wisest believers.

In three major religions found in the world, which are called Abrahamic religions or revealed religions, including Islam, Christianity and Judaism have the religious orders to bury their dead under the ground. The depth of a human grave is usually six feet. In the event of Hazrat Musa(A.S), mentioning the Pharaoh, Allah Almighty said in the Quran that It will be kept in the world by making it a sign of a lesson. Pharaoh's body is still kept at the museum and there is a lesson for the viewers. Pharaoh was the title of the kings of Egypt. A famous Pharaoh’s mummy, Tutankhamun,  who was the eleventh Pharaoh of Egypt, was found in 1922 from thirty feet below.

Let’s go more deeply. Metal Detector is a useful tool for the present day. These metal detectors are used to find the landmines which can kill thousands of people even after the war. Metal detectors are also used to detect prohibited metals which the terrorists use for terrorism. The utility of these metal detectors is worth valued. But the extent of its signals ends up by twenty feet below the ground.

This is how metal detectors work and detect things.

The Bingham Canyon Mine is the deepest place dug by humans under the open sky. This pit is located in “Utah”. This pit is 970 meters deep and if the world’s tallest building “Burj Khalifa” located in Dubai is put straight in it then still there will be the space of hundred meters.

Let me explain you about the world' tallest building Burj Khalifa:

The Burj Khalifa known as the Burj Dubai before its inauguration, is a megatall skyscraper in Dubai, United Arab Emirates. With a total height of 829.8 m (2,722 ft) and a roof height (excluding antenna) of 828 m (2,717 ft), the Burj Khalifa is the tallest structure in the world since topping out in late 2008

What is Catacombs of Paris?

The Catacombs of Paris  are underground ossuaries in Paris, France, which hold the remains of more than six million people in a small part of a tunnel network built to consolidate Paris' ancient stone mines.

Now I will talk about the Catacombs of Paris which is located 20 meters below the surface which is the place where the remains of humans are kept underground. This place is located in Paris. According to an estimation, there are the remains of more than 6 million people.

If we go 40 meters below the surface then it is the depth of world’s deepest swimming pool. If the swimming pool is emptied and a man jumps in it, then he will only need three seconds to reach its bottom level. This swimming pool is located in Italy.

Today even in our country's dearest cities, metro buses appear to be a rugged farmer, but do you know that in Ukraine’s capital Kiev has a Metro station which is one hundred and five meters below the surface? 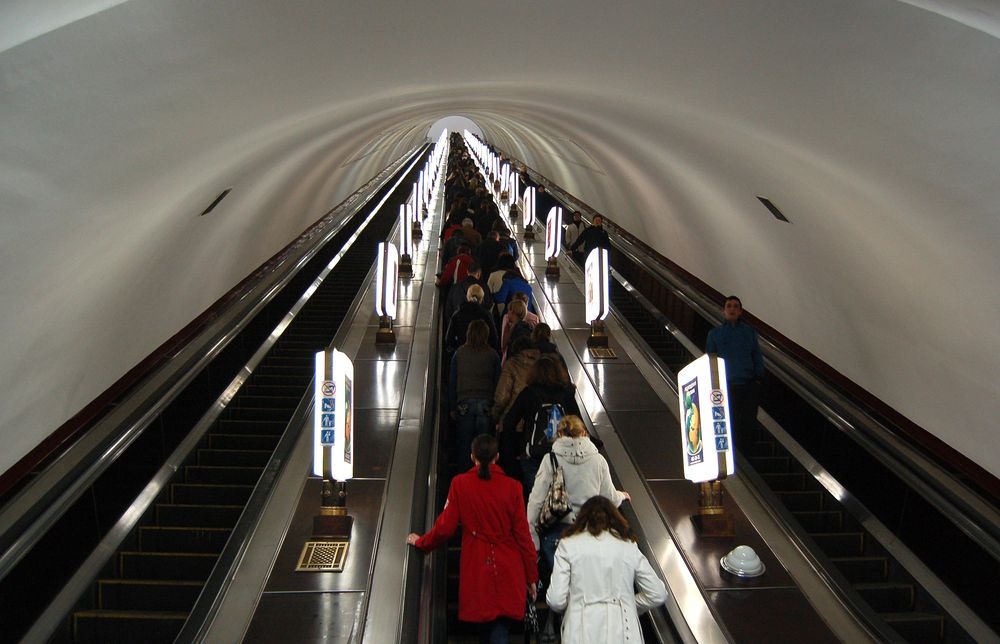 The fig is a useful fruit mentioned in the Quran. In South Africa Roots of fig tree were discovered in a hundred and twenty meters depth, which is a record.

As noted above, the world's biggest civilizations set their own evolutionary steps at the banks of rivers. Similarly, in the dark Africa, the famous Congo River has a depth of 220 meters which is the deepest depth of any river in the world. This river is in South Africa.

The depth of 100 meters is the scale in which the governments of various countries of the world bury their nuclear waste.(According to a research, the standard extent required for burial of nuclear waste should be a depth of 300 meters.)

Japan is a developed country in the world. In the Second World War, despite the worst destruction since the Atomic bomb blasts on Hiroshima and Nagasaki, Japan has left behind all the countries in the field of technology. Whenever the Bullet train or robots are mentioned, Japan comes in every mind because its skills and progress in these fields are unmatched. Japan is a country of many islands. It has built the world's deepest railway tunnel between its two islands to connect them, "Honshu Ireland" and "Hokkaido". This is located in the depths of 240 meters.

Life is from the water. To give water to any thirsty is an act of kindness and the person will be rewarded for this.  Giving water to thirsty in our religion has also been considered the best Charity. The deepest well dug by human hands is located in England. It was dug in 1862 and it has a depth of 392 meters.

Other countries are not behind in the race of development. Scandinavian country Norway which is located in the North Pole has made the world's deepest road tunnel which is 287 meters deep.

Lake Baikal is the deepest lake in this world which is 1642 meters deep and has a bottom at 1187 meters below the sea level. It is located in Southern Russia.

Where humans did a lot of work for the welfare of human beings, they also did things that resulted in humanity being killed and destroyed. To kill humans, humans have made such weapons that the Devil should also be forced to hide. One of the weapons is 'B-83 War Head'. This weapon is capable of entering into the earth and can burst up there. It can destroy things up to 305 meters of depth.

Jungles and caves are such places that even if anyone has not seen but everyone is still aware of them from the story of Tarzan read in childhood. There is such a cave which is the world’s deepest cave. From the surface of the earth, it has a depth of around six hundred and three meters.This cave is vertical. Its depth is estimated to be as deep as the height of the World Trade Center which was destroyed in 9/11. If someone falls in it then it will take eleven seconds to reach its bottom.

The Valley of America, the Grand Canyon of Arizona, is considered to be the deepest valley in the world. It is situated at 1.15 miles below the ground level. In the same way, the cave present in Georgia is 1.4 miles deep which is also the world’s deepest cave.

Here is the image of World's Deepest Valley.

Though the greed for wealth is not good because money is not everything but money is also a necessary thing. Especially, for the collective welfare and development of the people, the countries need money and the resources of the country are used in order to meet the needs.There is an example of seven hundred meters deep mine of gold in Chile. It was also known in the world due to an accident in a mine in 2010 when the 79 miners were trapped in it.

Today the mobile phone is very important in every person's daily needs. Mponeng Gold Mine is situated in the depth of 1.9 miles under the ground in the country of South Africa where mobile phone signals are also not available. It takes 4.5 minutes to reach the bottom via Elevator. If someone or something falls into it then it will take 25 seconds to reach the bottom.

It is said that the creatures of Allah are numerous, and He also provides food to insects in the stone. Often Allah Almighty shows His power to the people. One such view was also seen by the human when he reached 2.2 miles depth in the ground, and there were many Multicellular Organisms discovered in a living state, which was called Devil Worms later on.

South Africa's gold mine is situated in the depth of 2.5 miles. It takes an hour to go and come back. The temperature here increases up to sixty-six degrees centigrade. If we go 1.5 miles more deep from this depth and at this depth, the sea crust begins to start. If we go further more 1.5 miles deep then this depth is such that we can put the largest mountain, Mountain Everest, in this depth. At the depth of 6.8 miles, the lowest depth of the ocean is reached which is known as the "Mariana Trench". This place is called Challenger Deep.

This video will explain more about The Mariana Trench.

Man does not have any competitor in doing strange things. One such thing was done by Finland's music lovers, in August 2007. A music band called AGONIZER arranged a concert 1271 meters deep in the ground and performed well there. This was a successful concert and it is still a world record. It is written in The Guinness Book of World Records.

The flying airplanes flew at an average height of 7.5 miles. Former Soviet Union (Russia) planned to dig 23 centimeters wide and the deepest hole in the earth through a huge drill machine. The project was named “Kola Superdeep Borehole”. The work had to stop when the third part of the desired depth, i.e. 7.6 miles was reached because the temperature reached to 180 degrees Centigrade and the drill machine could not continue to work further. If a small thing is thrown into this pit, it will take 50 seconds to reach the bottom.

The man has been able to dig a pit of the depth 7.7 miles inside the earth. This pit is an oil and gas well called Z44-Chavyo. This depth is so that if fifteen World's tallest building “Burj Khalifa” can stand on top of each other.  (I have written about Burj Khalifa in the upper part of this article so you can see up there). The thickness of the upper crust of the earth is approximately 43.5 miles, and its internal center is situated in the depths of 3959 miles. We can estimate with these figures that despite conquering the space, the human has still reached one-seventh part of the depth of his home planet Earth.