The emancipation of women 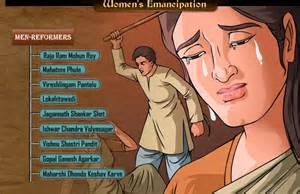 On no other question,perhaps are opinion in Pakistan as sharply divided as on the question of woman's place in society.These clashing opinion manifest themselves in everyday life.They determine ones attitude on many important questions such as the education of women,co-education,the purdah system,the dowry system the rights of women to inherit property,the question of monogamy and divorce etc.All these important question stem from the one basic question that what is the position of women?Is she inferior,superior or eual to man?What is her duty and relation to society?

Women was man's first slave.For ages man has used women for his pleasure.He has created the myth of woman's inferiority to man.Even today,who regard women to be essentially inferior creatures.Some think that women is all emotional.she has no intellect.Other asserts that she cannot resist temptation.Still others claim that women cannot live independently.There are many who feel ashamed of listening to their wives with patience.They regard it as a sign of inferiority to be influenced by their wives.

This attitude to women leads to the purdah system which is still practiced in Pakistan.It leads to amilder form of segregation.Men and women are not allowed to mix freely.It is argued that women's sanctity can be maintained only if she is kept away from men.Women are touch me not who must be kept away from the polluting gaze of men.This attitude also results in opposition to co-education and even to female education itself.

Luckily,this attitude is fast disappearing at least in its grosser forms.But ther is a more subtle form of it.There are quite a large number of educated who believes that men and women are equal,but that womens are fit for duties different from those of men.They argue that men and women are equal but different.A women's place is in a home.She is only suited to keeping house and rearing children.It is for to become engineersa,doctors,lawyer,scientists,statesman etc. While womens noblest ambition is to becoming a good wife and a good mother.By all means giving education to women but why give them technically,scientific or professional education to women.They argue therefore that women should be iven education different from that of men.\

These myths have since long been exploded.When men rose against the tyranny of men,women to began to militate against their oppression.In England,as late as 1910-11, women had to fight hard to vote.Thus suffragette movement was the result.Great writers like Ibean took up women's cause.Ibsen exposed the hollowness of married life based on false conceptions of relations between men and women.Todays women in many countries have comes out in those fields which were thought to be the preservers of men.Inchina especially,women are to be found working in every field in large numbers.

In Pakistan,women reaped the reward of the world wild struggle of women.They were given the right of vote.There equality was formally recognized in the constitution.Some of them began like Liaqat Ali khan and Miss Kaneez Yousaf.Women have also been given the rights of divorce.

All these are womens step.But they have no means solved the women question.It is not a day's job to solve it.Literacy is the lowest among women.Women sare looked upon as poverty.In some parts of Pakistan they are literally sold into marriages.In short,women form half the race of human.there can be no real progress if half the population is in slavery.The only way of emancipating women is to give them equal oppourtunity with men in every sphere.All our efforts should be concentrated on achieving this if we want our country to develope rapidly.