The Family As a Sovereign Institution

Journal of a Wayward Philosopher 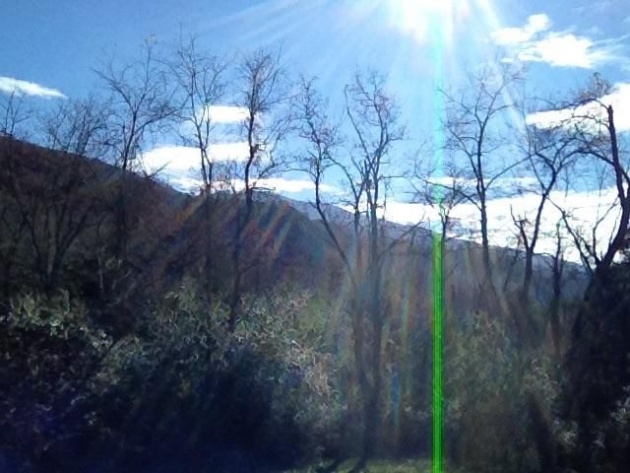 The Family As a Sovereign Institution

Take a look at the Bitcoin exchange rate - it's up nearly $250 this month! It's up $171 this week alone! We have seen this story before, but it is hard not to get excited about that kind of explosive gain in purchasing power. I can't emphasize this enough: if you aren't familiar with Bitcoin, look into it. It has the potential to revolutionize money, banking, finance, and accounting. Whether or not it will, who knows, but the potential is there. There will only ever be 21 million bitcoins in existence, and more than half of those have already been mined. That means the potential for continued purchasing power gains is huge if Bitcoin continues to gain acceptance. Why not have at least a little skin in the game?

Peak Foliage has come and gone, and only the most resilient leaves remain clinging to the trees here in the mountains of Virginia. The naked trees reveal a clear view of the bare cliffs that majestically overlook the southern side of our property. I look upon these cliffs with awe and respect as the morning fog slowly passes by their jagged ridgeline. These are the cliffs that looked down upon my daughter's birth a little over one year ago. I hope these same cliffs will stand watch as a joyous, energetic little girl laughs, runs, and plays in the yard below. Maybe they chuckle as she stumbles chasing mini-lab Boomer who frolics with a tennis ball in his mouth. Maybe they nod in approval as she learns to kick a soccer ball into the net. Maybe they smile as she prunes apple trees in the orchard. This philosopher-dad can only speculate and wonder.

I can't help but look inward as my mind's gaze slowly recedes from Madison's future and comes back into focus. My own path has been a strange one. After being 100% conventional, uncritical, and unquestioning for the better part of a quarter-century, a simple spark of curiosity led me down a road of intellectual growth and spiritual awakening from which I surely will never recover. From that spark the wayward philosopher was born.

In the early days of the awakening, the philosopher had all of the answers. The more research I conducted, the more philosophy I internalized, the more history and economics I studied, and the more I attempted to put it all into practice, the more I found that I simply did not know anything for certain. As my knowledge and understanding grew, my comprehensive answers shrank. A funny paradox.

That's not to say my beliefs wavered; indeed they grew stronger and more defined. But I began to recognize that all solutions are individual in nature. There are no one-size-fits-all answers because all collectives are imaginary. They are made up. They are Fiction. There is no "nation". There is no "us" opposed to "them". There are only individuals because human consciousness can only be experienced individually.

This doesn't mean we aren't interconnected; we are. At the heart of human consciousness is the omnipresent creative force of the Universe. Humans often call this force "God" and it flows through all of creation. Humanity is interconnected in this way. One could spend a lifetime pondering this phenomenon. Consider this: you are not "in the Universe"; you are the Universe.

Now I don't mean to undermine culture and tradition, because I think both are a very important part of human experience. Culture and tradition should be positive in nature, however; they should never foster aggression towards others who do not share the same views.

Wife Rachel will stop reading this entry if I ramble on for too long, so let me get to where I am going with all of this. The nation-state is going to devolve as the coming decades play out, and the modern welfare-state employed by all developed nations is going to collapse. This includes welfare for "the poor" as well as state-transfer programs such as Social Security and Medicare (and their equivalents in other nations). These programs are all going to be cut significantly or possibly disappear entirely over the coming years and decades.

To understand this, you must understand how the nation-state rose to power and gave birth to the welfare-state. The Industrial Revolution created economies of scale which drastically improved productivity, wealth-creation, and standards of living. This was a good thing. The downside was the Industrial Age created a situation in which the monopolization of force and coercion paid extremely well. In exchange for high-cost, low-quality "protection services", nation-states claimed the right to tax and regulate all people, businesses, and assets within a specific geographic territory. While not exactly a new concept, the scale of which nation-states extended dominion and extracted wealth was unprecedented. It was the mass-confiscation of private wealth that enabled the nation-state to grow and concoct the welfare model.

This dynamic is no longer viable in a world where money, assets, businesses, legal documents, and data can be encrypted and safely domiciled in cyberspace outside of any particular geographic territory. Much of daily human interaction, including commerce and communication, can take place in cyberspace as well. Monopolizing force and coercion does not pay in this paradigm because the decentralized, distributed nature of the internet makes it impossible to dominate. We discussed this in my previous journal entry as well.

That fiat monetary system, which came about in 1971 when the U.S. dollar's final link to gold was severed, has played a major role in the modern welfare state as well. The act of "printing money" is unrestrained within a fiat monetary system, but it necessarily reduces the purchasing power of the money.

This ability to create money from nothing has enabled the political class to ignore the welfare-state's mounting deficits and unfunded liabilities. Rather than make tough decisions to shore up these programs (like cut spending on military imperialism), government officials have simply printed money to continuously fund their welfare. While this has kept the money flowing to recipients, it has also caused that money to decline significantly in value. In other words, recipients receive their normal nominal benefit amount, but that nominal amount actually buys fewer goods and services over time specifically because creating money from nothing destroys its purchasing power.

Once decimated, it is unlikely that the welfare model will be rebuilt in the Information Age. Unfortunately, many who have grown dependent on the welfare system will be harmed by this. They will call for the State to "soak the rich" to restore the transfer programs, and there will probably be twelve Bernie Sanders' in that election cycle, whenever it may be. But the rich will have domiciled their businesses and their assets somewhere out in cyberspace, and the State will be rendered inept.

There is one institution that could help offset the loss of a public safety net, however, and it is the very institution the welfare-state sought to destroy: the family. In the Industrial Age families were taught that it was their moral duty to subvert their own interests and serve their nation-state, but this was not always the case. During the Feudal Age that preceded the Industrial Revolution, it is well documented that many families viewed themselves as sovereign. That is to say, these families took responsibility for their own security - physical and financial - and they strictly adhered to an internal code of governance. These were the families most capable of supporting others in their community as well.

Perhaps we will see a re-emergence of the family unit as a sovereign institution in the wake of the Great Reset. It is already common among wealthy families to establish a Family Office to set forth internal governance principles pertaining to family values, wealth management, family support criteria, and charitable activity. Family Offices often include a family constitution, a family crest, a family motto, a family council, and a family investment committee with an ultra-long term outlook.

There are as many ways to do this as there are unique families, but the easiest place to begin is to set up an Infinite Banking insurance policy for all children. I discussed this in detail in my journal entry titled Disintermediate the State. The Infinite Banking Concept has the power to single-handedly eliminate your children's need for student loans or personal loans, it renders the entire welfare model obsolete, and it creates a much larger income stream at age 65 than Social Security ever could. From there, families could start pooling money to create a "family bank" which could be tapped into by family members later according to well-defined criteria - probably emergency or entrepreneurial in nature. Families could begin to structure their investments to compound for generations rather than decades once their Family Office was well-established. Families could also purchase a family estate, potentially outside of their political jurisdiction, for family council meetings and other functions.

These are just a few examples, but the overriding idea is to create a permanence of security, both financial and otherwise, so that your family is not dependent upon anyone else for security and support. This in turn would enable your family to become a leader in your community and your associations of choice. There are plenty of people out there who want to support their community and help others, but they don't have the means to do so because they never established permanent security. In the Industrial Age, their solution was to use the power of government to force people with means to 'help' for them. That won't work for much longer.

I will conclude this entry by suggesting that modernity's lifestyle model actually fosters transience rather than permanence.

Modernity's model is to send our children off to school every day to be indoctrinated by a curriculum that very much favors political values over family values. When they graduate, we encourage our children to take out big student loans and rush off to college despite the fact that they have no idea what their interests, skills, and passions are. After college we encourage our kids to go find a steady job with good benefits, emphasizing income over values and experience. This model teaches our children to be transient every step of the way.

As with anything, there are pro's to go along with the con's of this model. I do not presume to say this model is always and everywhere a bad idea. Is it time for a new model? That's up to each unique family to decide for themselves. As for me, the answer is an emphatic yes.