Christmas. The most wonderful time of the year! Time has passed by so fast, I can't believe it's Christmas again! Places become colorful with lights and the air is again filled with jolly Christmas songs. People around the world celebrate the special season through their own ways and traditions. In the Philippines, Christmas season is a very well-celebrated occasion. Here is what makes Filipino Christmas one of a kind! 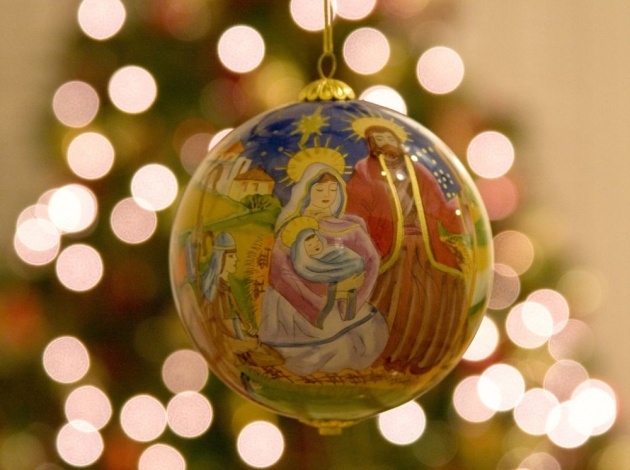 Christmas is a celebration to remember the birth of Jesus Christ, the Son of God. The word "Christmas" was derived from "Christ's Mass" or "Mass of Christ". The occasion is celebrated by Christians and even some non-Christians every 25th day of December.

The Bible says that Jesus Christ is the son of Mary, conceived through the Holy Spirit. Mary had given birth to Jesus Christ on a manger in Bethlehem, then fled to Egypt with Joseph after King Herod ordered all boys in Bethlehem who are less than two years old must be killed. No one knows exactly when was Jesus Christ born but different factors were considered to have December 25 be chosen as Jesus Christ's date of birth.

LONGEST CHRISTMAS IN THE WORLD

I honestly don't know how this concept began. Back when I was young, Christmas season begins on December. Today, you'll hear Christmas carols and see Christmas decors as early as September. Some people would even post a greeting on social media on September 1st.

One reason I see why Christmas is so long in my country is due to consumerism. Filipinos love celebration and so businesses will do their best to take advantage of the upcoming and most-awaited holiday. Prices of ingredients for the foods usually prepared for Christmas goes up when the holiday approaches, so the media would always remind people to buy ingredients and gifts early to save up and avoid Christmas rush. This probably made Filipinos feel and think that Christmas season begins as early as September. (This is only my opinion and there might be other reasons.)

Despite all the "-ber" months as Christmas season becoming a norm in my country, my family still begin Christmas on December. It's nice to see your surroundings getting ready for the holiday on September, but my family would rather celebrate it the way we're used to. I'm not against the long celebration of Filipinos. I actually think a 4-month long Christmas is cool and fun!

CHRISTMAS IN THE PHILIPPINES

Simbang Gabi or "Misa de Gallo" (Mass of the Rooster) or Night Mass is a mass attended by Roman Catholics. The mass is held every morning as early as four o'clock and lasts for 9 days beginning on December 16 and ending on December 24. Simbang Gabi is a preparation for Christmas for all Catholics. People also believe that completing the 9-day mass will grant their wishes.

Simbang Gabi goes back to the Spanish times wherein Catholicism was introduced to the Filipinos. Spanish priests held the Misa de Gallo early morning so that farmers can hear the mass before heading to the fields. Today, the mass is no longer just held in churches. Some malls hold an earlier mass at night for people who can't go to the mass early in the morning.

As early as September, Christmas carols would already be played somewhere. My neighbor is one of those who plays Christmas songs and carols on their speakers on September. As the month of December approaches, especially after All Saints' Day, you'll begin hearing Christmas music blasting at malls and other establishments.

People all over the world have grown to songs like Jingle Bells, Rudolf the Red-Nosed Reindeer, Joy to the World, and many others, but Filipinos have one favorite singer during the holiday. He is Jose Mari Chan, whose Christmas songs are played everywhere. Some Filipinos also make a meme about him which becomes popular especially during the first day of September. Aside from the English Christmas carols and Jose Mari Chan, Philippines have lots of popular Filipino Christmas carols too, like "Ang Pasko ay Sumapit" (Christmas has Come), "Pasko na Naman" (It's Christmas Again), and more! We also play Spanish Christmas songs like "Feliz Navidad".

Caroling in the Philippines is a fun Christmas tradition usually participated by children. During the Christmas season, kids would sing Christmas songs outside your home accompanied by their makeshift tambourine made from soda bottle caps tied on a wire. You can give them coins or maybe a paper bill when you feel generous. Caroling starts on December but there are some kids who do caroling on September. We would give them coins but tell them that they're too early for caroling.

However, caroling is not only just for children. Even adults go around houses to do caroling, usually with a band. When I was a kid, there was a band in our area who does caroling a few days before Christmas Eve. They send letters to houses beforehand to inform what date and time are they going to sing Christmas songs at your home. They usually come at night and their group is not less than 15 people. They would perform a couple of songs accompanied by drums, trumpets, cymbals, and other instruments. I always love hearing them sing "Sa Paskong Darating" (This Coming Christmas). Their performance is one of the highlights of my Christmas when I was young. My parents would usually give them a hundred peso. 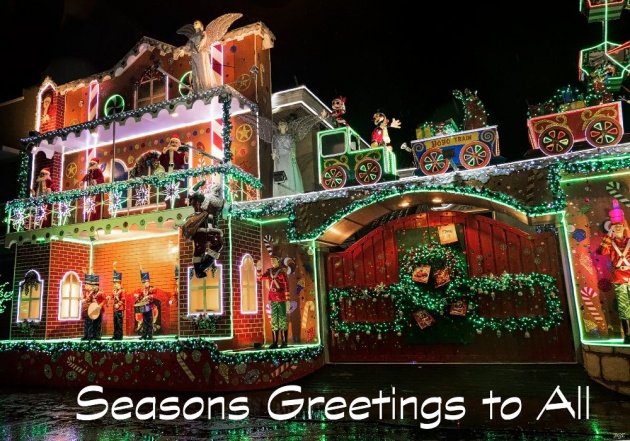 Aside from music, Christmas lights and decors are seen everywhere too. Malls, parks, and other establishments are lavishly adorned with beautiful lighting and decoration that will surely please the eyes of everyone. Huge Christmas trees are a common sight on malls and plazas. Houses are also decorated and lighted during the season. 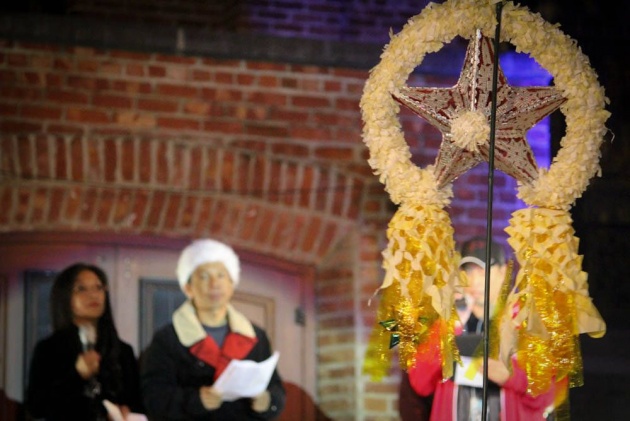 One very popular Christmas decor in the Philippines is the "Parol", a star-shaped lantern. It represents the star of Bethlehem that guided the Three Wise Men to baby Jesus. It also represents hope and light, and empowering the Filipino spirit. There is also a Nativity Scene ("Belen" in Filipino) design contest on every barangay of towns and cities. In Dagupan City, there's an open area where entries of the contestants are displayed for everyone to see. I always pass by the area but still haven't seen them up close.

Filipinos are creative and may decorate their homes lavishly as well. More than a decade ago, almost every house would put lots of Christmas lights outside their houses and even on trees or wherever on the vicinity of their home, but number decreased every year probably because of the increasing cost of electricity yearly. Today, only few would decorate their homes with Christmas lights. Most would just put a decor that requires no electricity like the regular parol and Christmas tree. There are also parols which lights up. The most popular ones are made from the province of Pampanga. 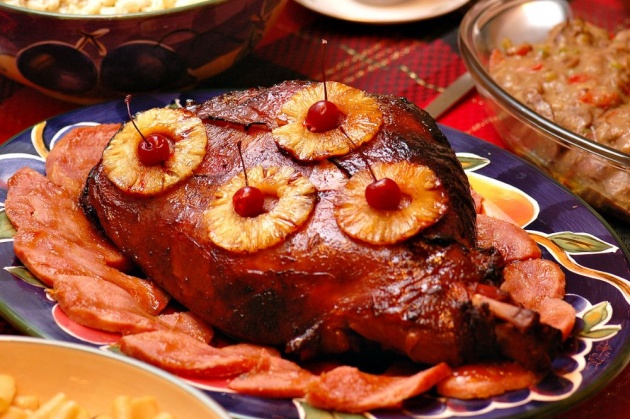 Noche Buena or Christmas Eve is the most special time of Christmas. It marks the birth of Jesus Christ and also means a time for a delicious feast with your family and relatives.

At the night of December 24th, families feast together on Filipino Christmas foods like hamon (ham), queso de bola (edam cheese), bibingka, puto bumbong, spaghetti, macaroni salad, and many other foods. This is the most awaited part of Christmas celebration by many. Who doesn't want to eat foods while having a good time with your family, right? Aside from going to church, Noche Buena is also another gathering which keeps the families together. Christmas is also the time when most Filipinos abroad would go home to the Philippines to spend the holiday. That is why foods during Christmas are extra special because it's a celebration of the holiday and reunion with people that you love whom you have not seen for a long time. 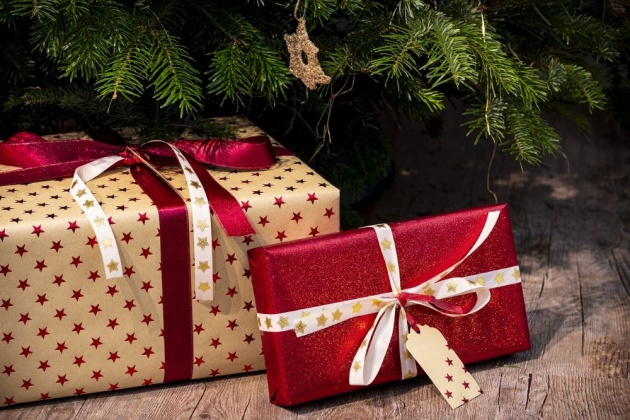 Christmas promotes the spirit of love and giving, and so gift giving has also been a part of the Filipino Christmas tradition. People give and receive gifts during Christmas parties which is also locally known as "monito-monita". A draw lots is usually done wherein the name you picked will be the person whom you'll give a gift to. Sometimes, they will just require you to bring a gift that corresponds to the amount agreed upon and distribute the gifts to everyone through raffle.

While adults enjoy parties on Christmas, the holiday is especially for children to receive gifts. Parents would usually let their children sleep early on the 24th so that Santa Claus could come to their house and leave their presents under the Christmas tree or in the socks hanging at the window. Believing that Santa Claus is real is the most fun childhood Christmas memory.

It is also a tradition on Filipino Christmas for aunts, uncles, grandparents, and godparents to give gifts or "aguinaldo" to their nieces, nephews, grandchildren, and godchildren. It can be a present or cash in an envelope. While it's a tradition, some godparents try to avoid it so they don't spend more money. (Or they're probably already broke so they don't show up.) Jokes about godparents hiding from their godchildren during the holiday is very common. In addition, December is the month when Filipinos who have relatives abroad receive "balikbayan boxes". These boxes contains foods and items from another country sent by a Filipino relative who lives abroad. 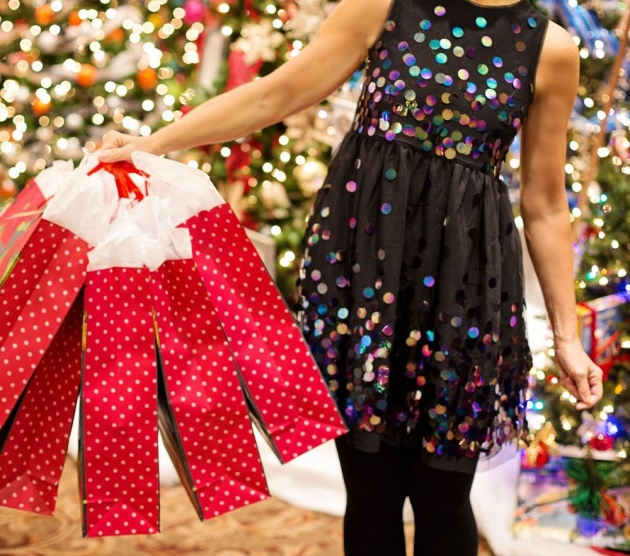 A Filipino Christmas is full of celebration and gift giving, so businesses make it more fun and exciting by putting their services and products on a discounted price to attract shoppers. December is also the time where employees receive their 13th month pay so expect malls to be crowded especially 15th of December onward. You'll see the word "SALE" on every corner of the mall which tempts you to splurge more money. It's honestly very tempting especially when you know you have more money. Malls even extend their mall hours to accommodate all the shoppers. Filipinos love to shop on December not only because of Christmas but because most items are on sale or cheaper.

The Feast of the Epiphany or Three Kings' Day ("Araw ng Tatlong Hari" in Filipino) marks the ending of Christmas season. It is celebrated on January 6, 12 days after Christmas Eve. This day celebrates the baptism and birth of Jesus Christ, and the visit of the Three Kings named Gaspar, Melchior, and Balthasar. The Three Kings or Three Wise Men followed a star across the desert of Bethlehem which led them to baby Jesus. They gave Him gold, frankincense, and myrrh. 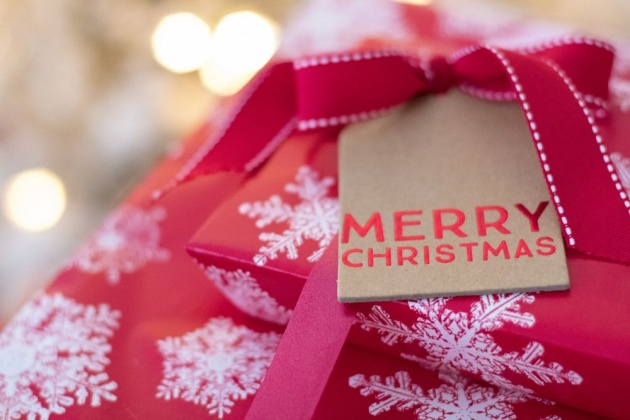 As the Philippines' slogan say, "It's more fun in the Philippines!" Christmas in our country is always extra special and widely celebrated. Being the country in Asia with a huge population of Catholics due to the Spanish colonization for 333 years, I am glad to have been born in the Philippines, as a Filipino, and to this religion.

Christmas is always a joyful  holiday. A time for love, peace, giving, and remembering Jesus Christ's birth. With all the celebrations and gatherings going on around the holiday, I hope we don't forget the true meaning of Christmas, its essence, and purpose.

'Tis the season to be jolly, Fa-la-la-la-la la-la-la-la!!! Have a Merry Christmas, Everyone!