THE FLAG OF PAKISTAN

Every country has its own flag.Flag represents a country at international level.Similarly,Paksitan had to select a flag for her representation.So,Pakistani flag was designed by the Quaid-e-Azam Mohammad Ali jannah,the founder of the Pakistan.The flag resembles to that of the hoisted at Dacca on December 30,1906. 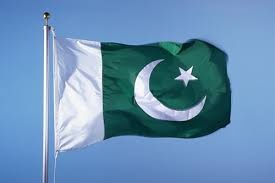 It was the time when the political Muslim leaders of the sub-continent were holding a meeting to form a political party for the Muslims of the sub-continent.
The flag hoisted at Dacca was green in color with a white crescent and star in the centre.Since then,the flag was being used by the Muslim league as the symbol of the Muslim community.After Pakistan came into being,the motif of the Muslim league flag was taken as the national flag of the Pakistan.It was annouced on July 18th,1947 that British government had accepted the demand for the establishment of the sovereign state of Pakistan,with effect from14th August 1947.
The flag was persented in national constitutional Assembly by the prime minister of the Pakistan.The flag of every nation is not merely a piece of the colth.A flag stands for freedom,liberty and equality.A flag portects the legitimate rights of every citizen.It protects and defends the integrity of the state. 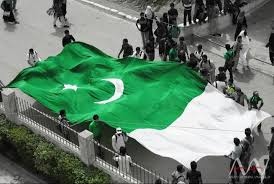