NOTICE: to watch the trailer click on the below image of David Tennant 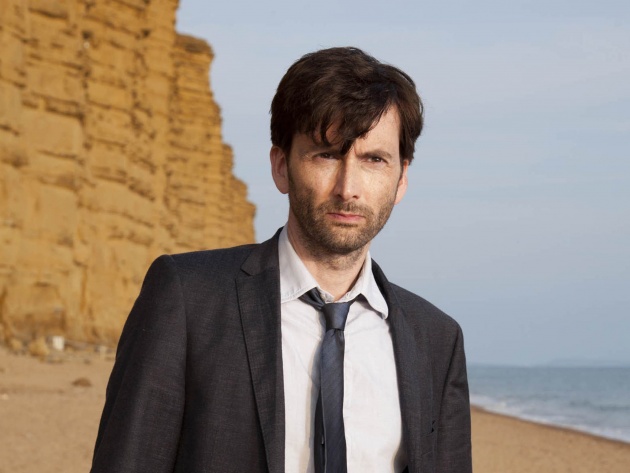 Last summer ITV's riveting drama "Broadchurch" thrilled American audience on BBC America, however, before the show was imported FOX announced that it would be remaking the show under the title "Gracepoint." As a huge fan of the original show I was not exactly thrilled. Part of why I loved the original show so much was because of how "british" it was (for lack of a better term). When you watch the show you can't help but notice the setting of a small English costal town (called Broadchurch). That setting is what allows so much of the plot to occur and those who have seen the show will no what I'm talking about, however I will not spoil the show for those who have not watched it.

Well now we finally have the trailer for "Gracepoint" and I'm still not crazy about it but I'm not completely opposed to it. "Gracepoint" is still being helmed by the creator of "Broadchurch" so that renews a little bit of my faith in it. As for David's accent, it isn't THAT bad but it still isn't great.

Upon watching the "Gracepoint" trailer I noticed several scenes that seem to be exact copies of those from the original show, such as the beach scene and the press conference. For those who have seen the original show know that Jodie Whittaker game a phenomenal performance as Beth Latimer. Her raw emotion upon seeing the body of her son is some of the greatest and most emotional acting I have ever seen on television or in a film. (No, that isn't a spoiler since it's in the dang trailer). I don't really think that the American recreation of that scene has a leg to stand on when compared to the original scene. I'm sure for those who have not seen the original series it will be fine but as someone who has seen it I'm not really a fan of the recreation.

"Gracepoint" will air on FOX in the the form of a 10 episode event, two more than the original show. Apparently the killer revealed in the final episode is being changed so that audiences are still as shocked as those who watched the original show but I feel like the other members of the town would not make for as good of a story.

READER QUESTIONS: What do you think of the trailer? Did you watch the original series? Will you be watching Gracepoint?