Continuing with social media campaigns... but this time, I won't focus on moving images, but on words. Are you one of those who pick up their New York Times or their Washington Post every morning on the way to work? Personally, I yielded a long time ago, and now almost exclusively read the news online. If you're like me, I bet that The Huffington Post is one of your number 1 sources. The Huffington Post is an Internet newspaper that covers a very wide variety of topics. Politics, films, green issues, weddings, "weird news" (!)... name it, The Huffington Post has it!

I recently came across an interesting article about the news website's use of social media: How The Huffington Post Keeps All Those Tweets Flying on The Content Strategist. All newspapers and magazines have social media accounts, because nowadays, this is where people get their information. Only then, they reach the original website to read the full article or news. So this isn't surprising that the Huffington Post has a 7-people team dedicated only to social media. The result? A Twitter profile that feeds about one tweet every 5 minutes to more than 2 million followers, and a Facebook page with an average of 40 posts per day and liked by about 680,000 fans.

They also focus a lot on all the comments they receive, and respond to suggestions with always the same goal, engage their audience. But of course with that many followers, they had to dedicate, not a team, but a computer program to monitor the comments received and flag the abusive ones.

And this is where I was surprised to read that The Huffington Post doesn't really have a social media policy, but works more on a case-by-case basis. How is it possible with that many readers and feedback? Dean Praetorius, the senior editor of trends and social media, answers “We’re not keeping people from having opinions or a conversation. We don’t want things to end with just putting out a link.” 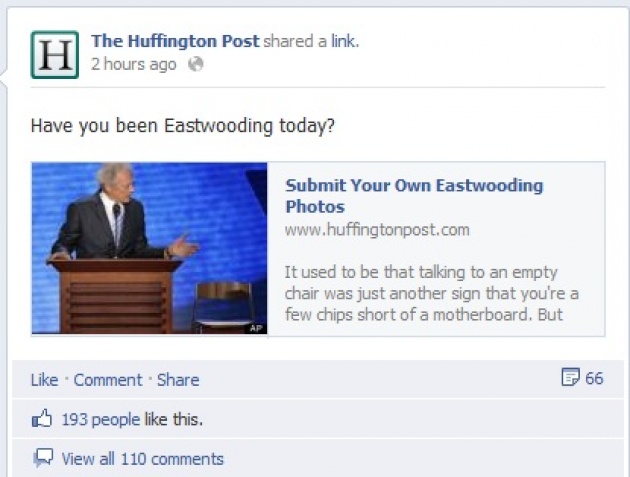 Reviewing comments but not deleting them too frequently, providing their audience with catchy posts or images that will drive attention and create a conversation, and allowing the readers to express their opinion, seem to be the key to the Huffington Post's social media strategy and success. The posts or tweets are just a start. The readers do the rest. They like, retweet, pin. This is called sharing on social media. And this is how viral stories are born.