Katniss had accepted the role of the mockingjay, Peeta and the victors were rescued, and more people have joined the rebellion. With things finally in favor of the rebels, it is now time for the conclusion in the final sequel of “The Hunger Games: Mockingjay Part 2”. 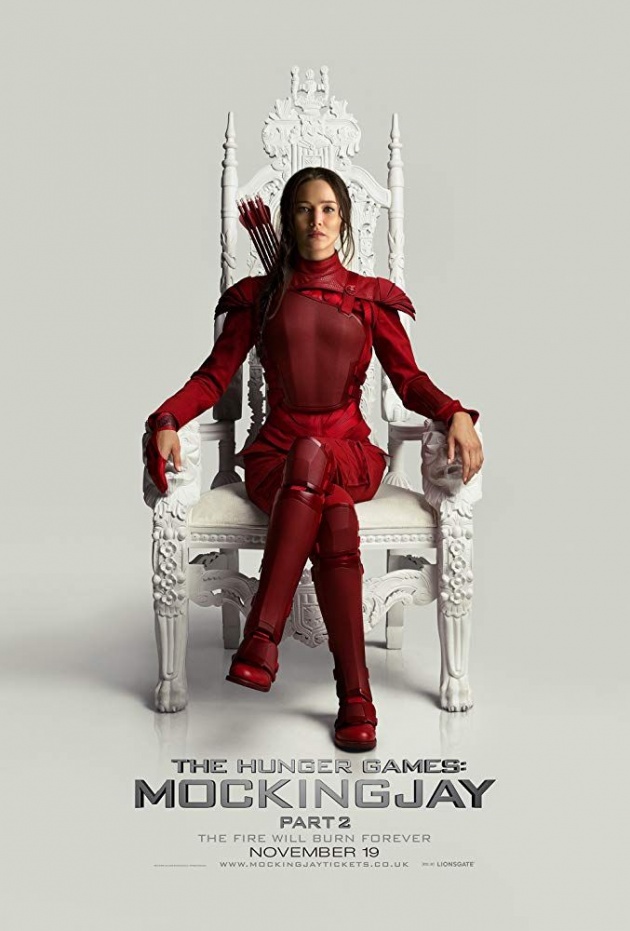 The Hunger Games: Mockingjay Part 2 is a sci-fi, action, adventure, thriller film directed by Francis Lawrence, produced by Nina Jacobson and Jon Kilik, and distributed by Lionsgate Films. The second part of the Mockingjay film was based from the final book, "Mockingjay", of "The Hunger Games" trilogy novel written by Suzanne Collins.

Katniss was prevented by President Coin of attacking the Capitol to personally kill President Snow for she is a very important part of the revolution and losing her might weaken the forces of the rebels. She then volunteered to join the troops invading the military facility of the Capitol at District Two. While negotiating with the survivors from District Two, she was shot in the abdomen but survived it because of her bulletproof breastplate. 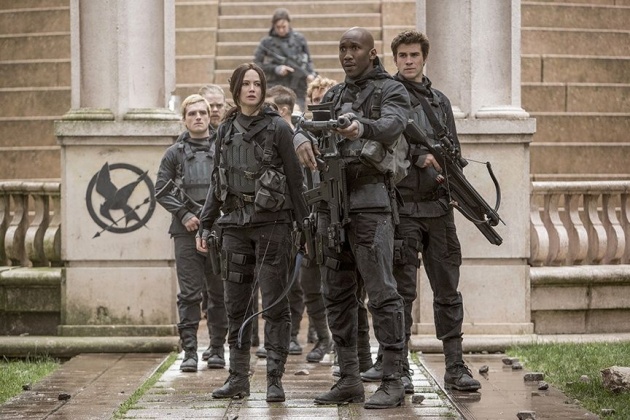 During Finnick and Anne's wedding, Johanna tips Katniss that she can sneak on a hovercraft heading to the Capitol to pursue her plan of assassinating President Snow. People were surprised to see Katniss who was then met by Gale. President Coin assigns a special group for Katniss to infiltrate the Capitol as they find booby traps or pods while being filmed for a propaganda video. Later on, Peeta was sent to join them. While resting to plan their next move, Boggs reveals to Katniss that it was Peeta President Coin wants to save and not her. President Coin disliked Katniss for she doesn't like people she can't control.

Failing to evade some pods, Boggs was killed and a huge volume of tar was released to drown and intoxicate the squad. Peeta lose himself and attacked Katniss while running to a higher ground but was stopped by one member of the squad and restrained by Finnick. Thinking that the rebels didn't survive the trap, President Snow broadcast their death but was interfered by President Coin to commemorate Katniss and persuade their supporters not to falter in the war. Katniss's squad resumed their mission and went to the sewers to avoid pods and confrontation with the Peacekeepers. However, a Capitol officer caught a CCTV footage of Katniss at the sewers and reported it to President Snow to which he ordered to release "mutts" and kill them underground. While making their escape, Finnick held back the mutts for the rest of squad. He was outnumbered and decapitated by the mutts. With their faces scattered around the Capitol, Cressida led them to a friend named Tigris, a former Hunger Games stylist, to help them hide. While hiding on Tigris's basement, President Snow went on broadcast calling all the residents of the Capitol to take shelter at the mansion to secure their safety and prevent the rebels to directly attack the area. 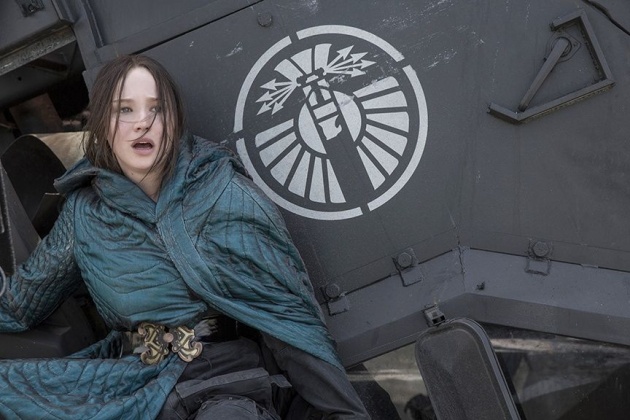 Katniss and Gale went along the crowd heading to the gate in hopes to infiltrate the mansion. However, a hovercraft released bombs in parachutes at the mansion's gate where the residents were waiting to enter. It killed many people especially the children who were gathered in front of the gate. As soon as Katniss got a sight of the aftermath, she sees rebel medics and Prim helping the wounded. Shortly, another bomb was detonated killing her sister and caused her to lose consciousness. 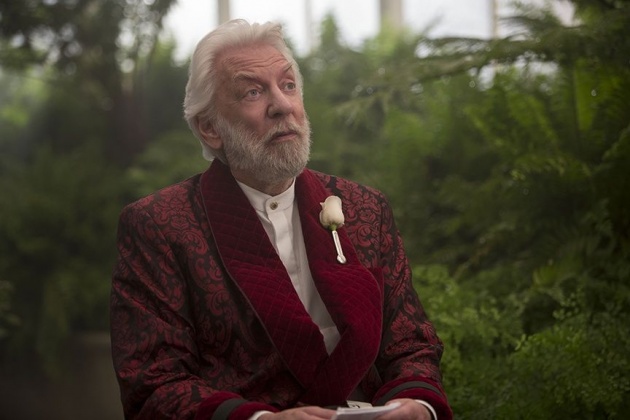 Upon waking up, she was told by Haymitch that the war is already over. Walking around the mansion, she reached an indoor garden where President Snow was held captive. President Snow clarified to Katniss that the bombing at the gate wasn't his doing but President Coins'. He added that President Coin played a fool out of them. Katniss didn't believed him but President Snow reminded her of their promise before of not lying to each other. At the meeting of President Coin with the victors, she announced that she will be the interim president of Panem and conducted a vote to have another Hunger Games which will involve the Capitol's children. Majority voted a yes, including Katniss to avenge Prim and getting the opportunity to execute President Snow.

During the trial of President Snow, Katniss shoots her arrow to President Coin instead of President Snow. A riot ensued and people attacked President Snow, killing him as well. Katniss attempted to commit suicide after but was stopped by Peeta. She was then dragged and locked in a room where Haymitch spoke to her and read the letter Plutarch gave her. Katniss wasn't punished for killing President Coin and was pardoned by Commander Paylor, who became Panem's president. She returns to District 12 to live a peaceful life along with Haymitch and Peeta, whom she married and had two kids with.

The part that I love most was Katniss’s entrance to execute President Snow. The camera behind her while she come out; the panning of camera while she walks and also capturing the reactions of the people at the background; and the long shot showing her joining the rest of the victors with people walking behind her. This scene gave me goosebumps, it looks so good. Meanwhile, the close up shot of Effie’s face while bidding farewell to Haymitch and Katniss shows her sadness of being separated with them. Seeing her face scrunch as she control her tears really saddens me. Another one that I’d like to mention was Katniss and Primrose’s moment of hugging together while dancing during Finnick and Annie’s wedding. As the camera focuses on them, it circled on them several times on a quite fast pace. It’s a cool concept including the blurring of the background as the camera rotated because it somehow sends a message that the sisters hold on to each other dearly and above others, family means the most to them. However, the camera rotating fast just made me feel quite dizzy.

Visual effects and 3D CGI animation were fantastic just like the ones in the previous sequels. The flames, explosions, hovercrafts, holograms; the enormous black tar and the lizard-like mutts at the sewers. They all looked real. I have to say the lizard mutts were awesome and very scary-looking in my opinion because it made me look away most of the time they were attacking the rebels. (I hate scenes with monsters murdering humans.) Meanwhile, the prosthetic wound on Katniss’s abdomen and the bruises on her neck looked genuine as well. Kudos to these talented artists for adding colors and action to the film.

Of course, speaking of talented artists, we have the casts. I liked Sam’s (Finnick) and Jennifer’s (Katniss) combat moves during their fight against the lizard mutts. They looked like characters in a 3D game especially Sam. Honestly, they all have done a great job. What they do seems fun but we know it takes an incredible talent to become an effective actor. Special mention to the two tough girls I love Jena (Johanna) and Natalie (Crisseda) for their amazing portrayal of their characters. Natalie looks cute, cool, and tough while Jena looks tough and very badass. 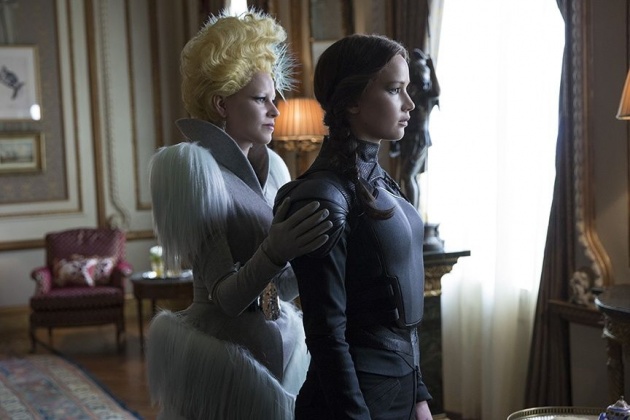 I was bit disappointed not seeing Katniss in red mockingjay outfit since it looked very cool on the movie posters. I was really expecting it in the film. Oh well, aside from the gorgeous black mockingjay outfit of Katniss, Effie was back with her usual posh coture. Who doesn’t want to see Effie’s odd but favorable fashion? Effie isn’t Effie without the stylish and quirky dresses. One of her dresses that captured me immediately was her dark pink (or maybe fuchsia) dress by the end of the movie when she brought Katniss to the Capitol mansion. The style of the upper part of her dress greatly reminds me of the "wrap-around" worn for a Filipiñana dress, the national costume for Philippine women. Commander Paylor almost have a similar style of costume too. I also like President Coins’ dress during the trial, by the way. It looked simple but elegant.

The rest of The Hunger Games sequels have taught us many lessons and the final sequel has again some to take with us and use in our lives. 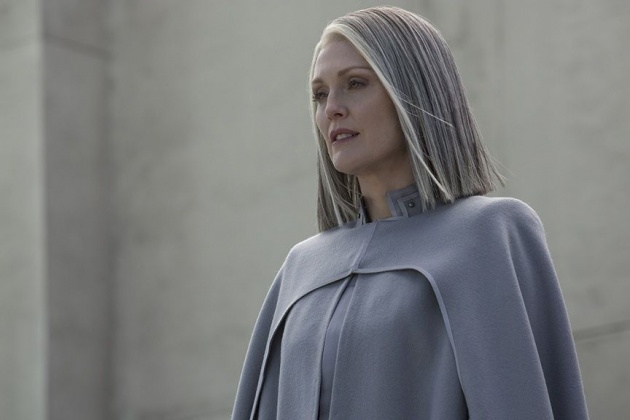 First, is to know that your ally is sometimes actually not an ally. Katniss was used and disliked by the very person whom she trusted in the rebellion for selfish reasons. She was trapped and became a victim of the political rivalry between President Snow and President Coin. This is to remind us that not all people who smiles on us and lends a hand wishes good things for you. Sometimes they do it for an inner motive to put you in danger in the end. Just like Haymitch told Katniss in Catching Fire, "Remember who the real enemy is."

"Today, the greatest friend to the revolution will fire the shot to end all wars. May her arrow signify the end of tyranny and the beginning of a new era. Mockingjay, may your aim be as true as your heart is pure."

Second, is to stay firm on what you believe in. As what President Coin told her before she executes President Snow, she goes for her own resolution and shot President Coin instead even though it would cause chaos from the crowd. This teaches us to truly know and believe our own decisions without the influence or suggestion of other people. 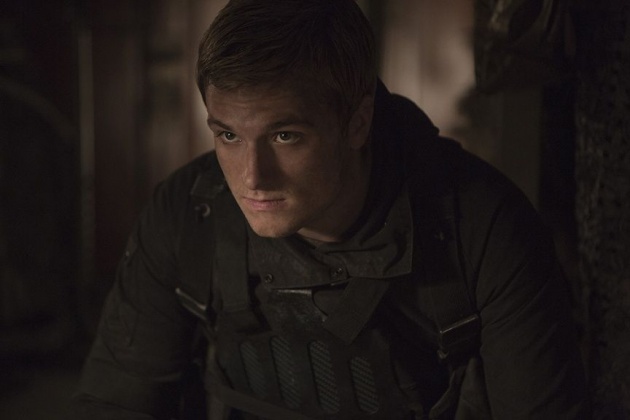 Third, is to know that love is not a measure of time but with the things you've been through together. Katniss have known Gale longer than Peeta, but Peeta and her had gone through more life-threatening events that tested their relationship together. From a fake relationship, the unexpected turn of events made their relationship into a real one. Katniss shows that we can learn to love someone and that trials make the relationship stronger, not time. 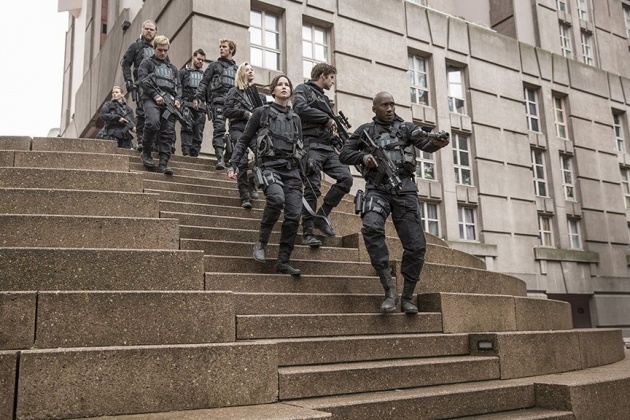 Fourth, is that peace and victory comes with a sacrifice. Many people and friends had risked their lives to keep Katniss alive. Rue, Mags, Castor, Boggs, Finnick, and others. They risked everything because they believed Katniss can change Panem. It tells that the biggest trials cannot be overcome by only ourselves. We need people who genuinely care to support us. 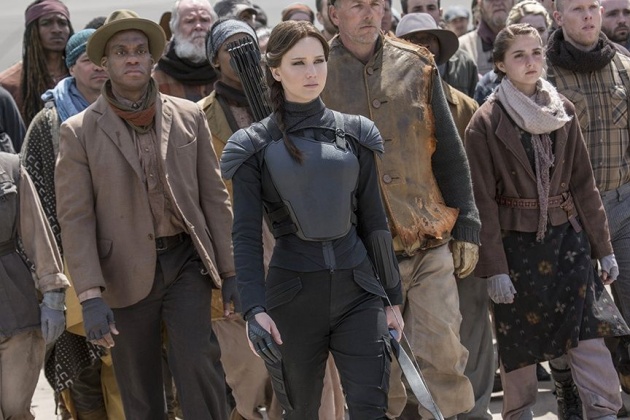 Fifth, is knowing that women are great leaders too. President Coin led the rebellion, Commander Paylor became the president of Panem, and Katniss saved Panem from selfish leaders. Let's include Effie too, who comforts and motivates Katniss whenever she gets the chance to be around her. This proves that women are powerful and have a voice in the world to make a change. 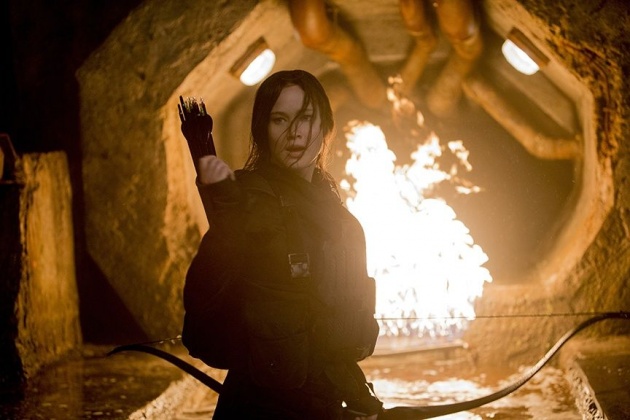 The Mockingjay Part 2 was the last sequel of The Hunger Games film series and I like the unexpected turn of events at the end. I was just a little disappointed that there wasn't much action between the military and rebel forces but it was still okay. They probably had difficulty fitting in all the important scenes in the film. I like the movie and love some of the characters as well. It entertains and teaches us lessons we can learn from. I'm definitely recommending this film to people who still haven't seen The Hunger Games film series.

Here are my reviews of the previous sequels of the film!