The Importance of Finding and Advocating for Art

“New Years, at its best, is a time to look past all the flotsam and random in your life and see who you want to be.”

As the year ends we start to clear out in many areas of our life and take a look at what’s important. In the age of electric “flotsam and random” it’s a challenge to weed through the overspill of nonsense and keep everyday life meaningful. But then I read an article online about a newly discovered book of magic realist writing out of Russia, unknown for a hundred years, and I’m inspired to find what else is out there.

In December, a lively discussion was started by Miguel Angel Font Bisier about why films were lacking in uniqueness and ambition, that there seemed to be an overrun of remakes and copycats coming out of Hollywood, so much so that true visionaries were fleeting and rarely glimpsed.  This is hardly a conversation unique to the film industry, but it’s certainly more prominent with their PR machines constantly putting it in front of us.

But in truth - originality is thriving in a world of sequels and prequels.  I think it's important to bring up the frustrations that Miguel did, because it keeps us questioning our motives as filmmakers, and pushes us back on the path to creativity. However, the search for originality is never more important than when you think it no longer exists, because when you do look, you find an overspill of genius.

The artist is the one who can find the chink in the door and allow us to push it open.

and new life. Their work and their practice break dimensions in time and space,

throw wild seeds into monocultures. In a disconnected world they bring connection.

And sometimes they bring us back.

- Charlotte Du Cann, Seeing Through a Glass Darkly - Towards an Aesthetic of Uncivilzation

Of late, I’ve made myself a new rule - every day find one article that introduces me to a new artist or idea. This is my first step in weeding through the nonsense, and scrolling past the social media egos to find the likes of photographer Kirsty Mitchell and her beautiful “Wonderland” series, 5 years in the making (a lesson in patience and creating art); and Davy and Kristen McGuire who have decided to do the reverse of most filmmakers and aim to project their films on tiny screens, inside dollhouse windows and jars like cinematic lightning bugs.  I’m fascinated by Jeff Desom’s “Rear Window” timelapse, and Ignacio Ruiz Alvarez’s “Humanoide No Robot” on Film Annex. Every day - something new. 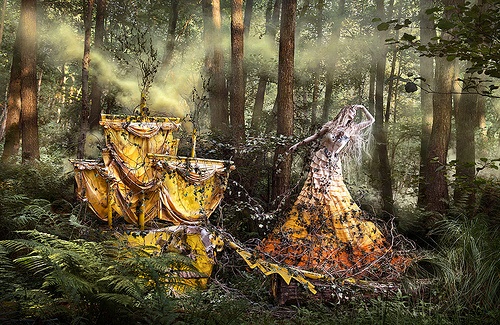 Living in New York, there are countless basement theaters, second-story galleries, and hole in the wall music clubs bustling nightly with immense talent.  We hear about them from friends, someone’s retweet, or create them ourselves.  Their art may not hang on the walls of the Met, or be at the top of the New York Times best-seller list, but because we stopped, and took the time, and read their poem or watched their film, we have benefited from their inspiration.  When we tell a friend, or post about it, we are advocates for inspiration. Our imaginations are made new every time we open a book or click on play or read about what an artist is creating.

So why isn’t Hollywood embracing this renewal, and why does tv seem to be decaying with reality tv shows?  We might think the answer has something to do with money, but I believe it has more to do with fear of the unknown. As an artist you need to have room to fail, and try again, get it right and fail again. Not a lot of people are willing to take the time or energy to do that. And when you do - it seems the post about your project gets lost in the ego-driven social media newsfeed. I think that audiences are as guilty as mainstream production companies when it comes to supporting originality.  We can be very unforgiving when someone tanks at the box office.  Will Tim Burton ever live down “Planet of the Apes”? He should. And we should get past it.

I’ve always been fascinated by the fact that Van Gogh sold only one painting in his entire lifetime. How is that? Who eventually found him and started making his art the most sought after paintings in modern history?  A friend recently posted an image to Pinterest that read: “I’m going to create art, whether anyone cares or not.”

We should care. We should seek it out, find it, post it, repost it, go see it, pay for it, show up and most especially stand up for it - tell the world what it is you like as art.  Who cares what a critic says, or a friend.  Do you like it?  Then let me know. Because I’ll check it out.  It’s easy to do that on the internet. As an artist I am deeply grateful to anyone who advocates for my art.  I’m happy to have a home like Film Annex that actively promotes its filmmakers. They want to hear your voice. A lot of us want to hear your voice, but we won’t know it’s there unless we're told.  Advocate for art. That is the best way to help someone find it, every day when they’re scrolling past selfies and shocking political quotes that may or may not have been said by the person they’re attributed to. This is how I grow as an artist and find courage to take risks.  “Beast of the Southern Wild” did with narrative structure something I’d never seen before and thought immensely moving. A huge risk as well to focus on a corner of life often forgot - one that I thought paid off beautifully. Did I think my friend from high school who had never seen an art-house film would like it? I posted about it regardless, and she and her husband rented it.  Whether they liked it, was up to them.  Whether or not they knew about it, was up to me.

Just before Christmas I submitted a video to Madonna’s “Art for Freedom” project.  She is calling for artwork (poems, songs, photos, videos, etc) that speak to social and personal injustice or oppression. What does freedom mean to you? If you haven’t seen the artwork being featured here - please take a look.  If you haven’t heard about it or thought about submitting, please do. Because the other half of advocating for art is participating in art.  Uniqueness and originality have never ceased, they’re out there waiting to be discovered and brought to life.  Reveal that in yourself. Find the “strange attractors” and let everyday be founded on inspiration. Then go make a movie.

“The purpose of art is washing the dust of daily life off our souls.” - Pablo Picasso

Happy New Year everyone!  I look forward to seeing who you become in 2014.

(frame grab from “Remember Me”, my Art for Freedom submission) 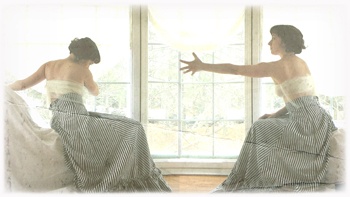