"You can never burn the spark of The Dragon Emperor's. Even if you crush my pride and honor, the spark will shine bright like never before!" - Sakyo Kuroyami 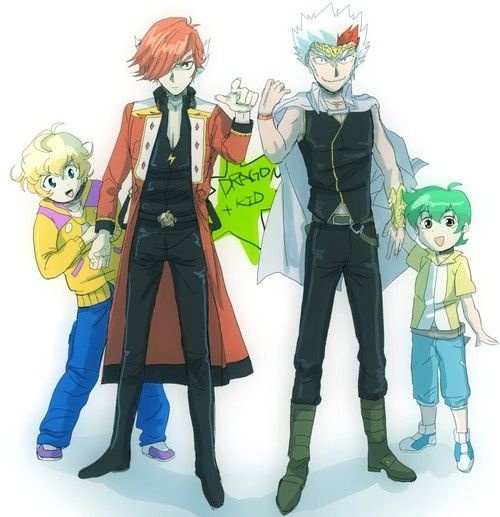 Sakyo sports wavy red hair laid down to cover his right eye, while the left side of his hair is quite shorter and leaves room for him to look with his left eye. There are many pointed spikes at its ends and two small, but pointed strands of hair. His hairstyle continues to line down beside his ears and around his neck. Behind his ears is a spiky area of his hair distinctly dyed white, giving off the impression of a Roman olive-wreath. His red eyebrows are thick-spiked; Sakyo has a light skin complexion. He also has small red eyes that give him a mystical appearance; already in conjunction with his remaining attire. Sakyo has a small pointed nose with tiny lines above it.

Sakyo wears a long jacket with a very unique design. Primarily red, it features white and yellow highlights. However on the inside, it is a plain white instead. Red diamonds line across a white part of the jacket, with yellow locks connected by black belts of some sort. His interior clothes are much more basic; a black shirt with a small lightning bolt and black pants with yellow highlights, along with black shoes. He even wears a red belt with at the centre: a golden hand of a dragon holding a ball in its palm.

Sakyo is very quiet and very mysterious. He also keeps his pride well and doesn't brag about his power. He also says what he feels, calling a low classed Shinobi "Idiot." or "Don't let your Pride fill you up, it'll just burn out your spark." He also does laugh and smile, but rarely and have a great friend named Zyro, who defeated him in a tournament. As the next Dragon Emperor, Ryuga, Sakyo shares the same traits.