The New Golden Age of Television

Have you noticed how many big names are working in Television today? Martin Scorsese, Kevin Spacey, Sigourney Weaver, James Spader, Kieffer Sutherland, Kevin Bacon, all names associated with the big screen, yet now working for the small screen.

What's the reason behind that strange phenomenon? Is it money? Is it the quality of the projects themselves? Is it the advancing age of these fine actors? Well, it's all of the above, and more.

Firstly, a lot of actors, good ones at least, have been complaining for some time now about the quality of the scripts coming out of Hollywood lately (and by lately, I mean the past 15 years, at least). With studios attracted to blockbusters and brainless eye-candy fort their "sure-fire hit" qualities, actors interested in good scripts, in delivering performances that stand the test of time, are left stranded, with  nowhere to go. Add to that the fact that these actors aren't getting any younger, a fact that is repulsive to most studio executives, and you see where this is going. TV is the answer.

But there is more to this than meets the eye. More and more talented writers are getting fed up with Hollywood and studios, too, and are turning to TV to produce daring, high-quality work. Vince Gilligan (Hancock) created Breaking Bad, arguably one of the finest TV series ever made; Martin Scorsese (Goodfellas, Shutter Island) is behind Boardwalk Empire, one of the most critically-praised shows to come out of HBO; Kevin Williamson, the man behind the Scream and I Know What You Did Last Summer franchises, is the creator of two hit TV shows, The Vampire Diaries and The Following, the latter starring Kevin Bacon.

There is also the fact that many writers and actors who started out in TV in the past few years have graduated to superstar status, thanks to the popularity they gained on the small screen. J.J Abrams, the man behind Alias and Lost, comes to mind. Abrams is now Hollywood's new wonder boy, having teamed up with Steven Spielberg for Super 8, and directing the last two Star Trek blockbusters. Next for Abrams, co-producing and directing the new Star Wars films. Not bad for someone who started out writing scripts for Felicity!

Also, there is the financial security aspect. If you are an actor or writer, and manage to be involved in a show that goes on for more than five seasons, chances are the royalty checks from said show will keep coming late into the golden years, thanks to reruns and syndication. A lot of creative people consider working on a successful show their retirement plan.

In the end, everybody wins: the actors, the writers, and, most important, us, the audience. Thanks to the new golden age of TV, we now have Boston Legal, Breaking Bad, 24, Game of Thrones, The Blacklist, Boardwalk Empire, House of Cards, and many other fine shows that wouldn't have been possible only a few years ago. Remember JAG, Silk Stockings, and Beverly Hills 90210? Yes, that's what we watched back then. But wait... 90210 is still on, isn't it? 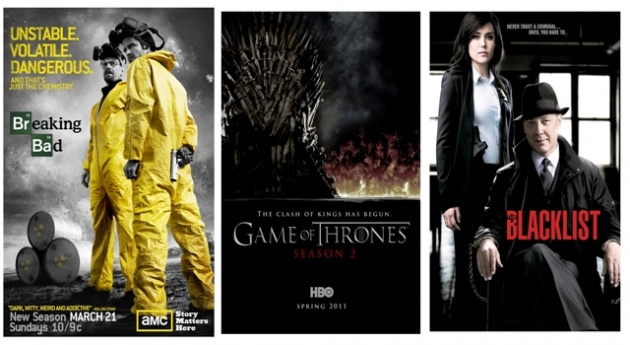