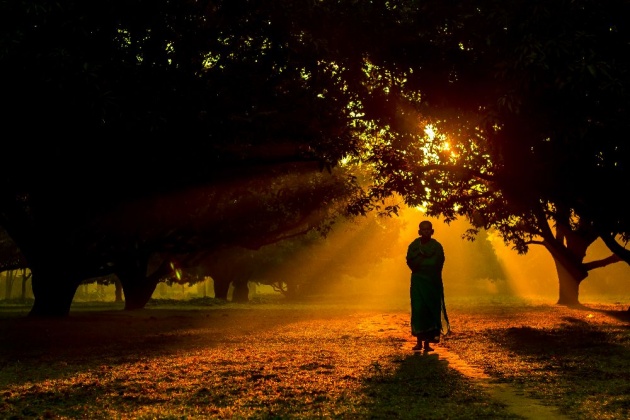 Happy New Year! As I touched on in my last journal entry, I expect 2016 to be a very interesting year in the financial markets. Credit has been expanding and interest rates have been falling for more than three decades now, but 2016 may be the year those trends reverse.

The “authorities” will fight such a trend reversal with everything they have, but Mr. Market will eventually assert himself. Trees don't grow to the sky, as they say. For a more detailed look at the prominent macroeconomic trends of our time, as well as how to position your finances accordingly, please see our online course Finance for Freedom: Master Your Finances in 30 Days.

Moving from finance to philosophy...

Socrates: Everyone wants to tell you what to do and what's good for you. They don't want you to find your own answers, they want you to believe theirs.

Dan: Let me guess, and you want me to believer yours.

Socrates: No, I want you to stop gathering information from the outside and start gathering it from the inside.

This dialogue is from a book by Dan Millman titled Way of the Peaceful Warrior, and I think it is an excellent way to start this entry. I will warn you: I know what I want to say, but I am not exactly sure how to communicate it so what follows will be unfiltered, unwashed, and likely controversial in reputable circles. I must also issue a disclaimer: I believe the historical references that follow to be true and accurate – to the extent that historical references can be true and accurate – but I am not an expert historian so I apologize in advance for any over-simplications.

Societies, all throughout history, seem to be organized around and driven by commonly-held beliefs. Yuval Noah Harari fleshed this concept out in his book Sapiens: A Brief History of Humanind. Harari calls these commonly-held beliefs “myths” that enable groups of people to undertake large-scale operations. Mind you, Harari doesn't suggest that these “myths” are necessarily false, he simply points out that they are powered by collective thought and action.

As best I can tell, societies tend (though not always) to uphold common beliefs that are relatively fair and tolerant when they originally form. I am going to focus on Western Civilization in this entry because that's what I know, but the same cycles seem to play out in all civilizations throughout history.

Western Civilization was based on Judeo-Christian principles. These principles created a standard of conduct that stood above earthly institutions, and they placed morality and responsibility in the hands of the individual. This was a distinct break from the Greco-Roman standard that emphasized wise rulers and gracious gods as the source of personal well-being.

A quick look at the Christian Gospels demonstrates the core of Judeo-Christian principles. Jesus of Nazareth was constantly calling out the Sadducees and Pharisees as hypocrites, serpents, and vipers because they were proponents of the rule of men rather than the rule of God. In other words, they saw obedience to earthly authority as more important than obedience to personal morality. Matthew 15 characterizes this concept perfectly:

Then the scribes and Pharisees who were from Jerusalem came to Jesus, saying, “Why do Your disciples transgress the tradition of the elders? For they do not wash their hands when they eat bread.” He answered and said to them, “Why do you transgress the commandment of God because of your tradition?”

Jesus and his disciples were individualist outsiders who did not go along with the collective insanity of their time and this was at the heart of Judeo-Christian philosophy. Judeo-Christian principles emphasized the primacy of the individual over the State and established power institutions, but they also required personal responsibility and morality.

Do unto others as you would have them do unto you was the golden rule and from this simple statement common law, contract law, and market capitalism developed and evolved over centuries of Western tradition.

As societies grow in size and wealth they tend towards centralization – the institutionalization of social instruments via a “ruling” administrative hierarchy – and this is exactly what has happened to Western Civilization. This process inevitably transfers emphasis away from the individual and toward the collective, and it tends to corrupt the original societal “myths”.

As the central power structure grows, so too does the burden upon the economy, and it becomes more and more necessary for society to suppress individual thoughts and actions that run counter to the accepted paradigm.

The suppression of opposing schools of thought begins with semi-compulsory institutionalized education which places an emphasis on politically correct narratives and rewards mindless compliance. By the time they have completed their University studies, most students have internalized nearly all elements of the public narrative and they will meet any opposing thoughts with ridicule and hostility. Then the mainstream news stations work 24/7 to make sure that no one strays too far from the accepted public narrative.

Notice how there is always a call for solidarity: “We must do this” or “We cannot allow that”. It is always “us” versus “them”, and the public narrative makes it clear that “we” are noble and “they” are evil. In this environment all that matters is what “we” do as a political structure thus personal responsibility and morality fall by the wayside.

The movie “The Matrix” captured this phenomenon well:

Morpheus: The Matrix is a system, Neo. That system is our enemy. But when you're inside, you look around, what do you see? Businessmen, teachers, lawyers, carpenters. The very minds of the people we are trying to save. But until we do, these people are still a part of that system... You have to understand, most of these people are not ready to be unplugged. And many of them are so inured, so hopelessly dependent on the system, that they will fight to protect it.

I became very angry when I first stumbled upon this phenomenon; that is, when I first realized that the institutional path I had followed my entire life was designed (intentionally or otherwise) to lead me away from personal growth and development. At first I thought the solution was to reform society according to the forgotten principles of liberty, common law, and contract law so that this would not happen to future generations.

Such a mindset led directly to depression because every step taken by society has been away from those principles. I struggled with this for quite some time until I finally realized that the battle wasn't external, it was internal. It finally occurred to me that my responsibility wasn't to reform society, it was to reform myself according to the principles I held dear. The challenge was to become self-referential. The challenge was to heed the Warrior's call.

The Warrior's call is to find meaning in each moment; to find life in every breath. At first glance this sounds simple, but it is incredibly hard to do.

The only way to find meaning in each moment is to conquer your need to seek worldly status and the approval of others. This isn't easy, but a whole new perspective opens up once status is conquered. You suddenly gain access to an inner strength you didn't even know existed, and you begin to trust yourself implicitly. You no longer need permission to act on your principles, and you no longer need to apologize for failing to conform to the status-quo.

You also begin to appreciate the simple things in life. A drop of lemon in your morning tea, the slow-moving mist eclipsing the mountains, the soothing crackle of the glowing hearth, the laugh of a young child as she absconds with the toilet paper, the smile on the old lady's face when you say “hello” as you pass by – these are the things that status-obsessed people do not have time for.

Social reformers of all stripes and beliefs have always sought to reform society according to their preferences by focusing on what others should do differently. But others typically aren't interested in doing much differently, so they don't. As I mentioned earlier, I originally fell into this trap when I wanted to reform society according to the principles of liberty and laissez-faire. Though I still hold those principles dear at the individual level, I am somewhat ashamed of that stage because I now realize that if anyone knows exactly how society should be reformed, he isn't writing these journal entries.

As best I can tell, societies only become more free and just after a critical mass (10-20%) of the population experiences a self-referential awakening. This seems to happen periodically throughout history, and I think it is happening once again today largely thanks to the freedom of information provided to everyone by the Internet. That is why I am so confident that the decentralization trends are rapidly gaining steam.

I will leave you with one more dialogue from Way of the Peaceful Warrior:

Socrates: I think you should continue your training as a gymnast. A Warrior does not give up what he loves, Dan. He finds love in what he does.

Socrates: A Warrior is not about perfection, or victory, or invulnerability. He's about absolute vulnerability. That's the only true courage.

Dan: What kind of training do you think I could do? I just had an accident!

Socrates: The accident is your training. Life is choice. You can choose to be a victim or anything else you'd like to be.

Dan: Just ignore what happened to me?

Socrates: A Warrior acts, only a fool reacts.

Socrates: That's the future. Throw it out.

Dan: Well, how would we start?

Socrates: There is no starting or stopping, only doing.

Welcome to the last part of this hate/hurt series. Because of doing these blogs, I now understand wh…

Why Truth hurts the most?

Who doesn't want to do the angelic talk on the need of always being truthful. Never lie, always be t…