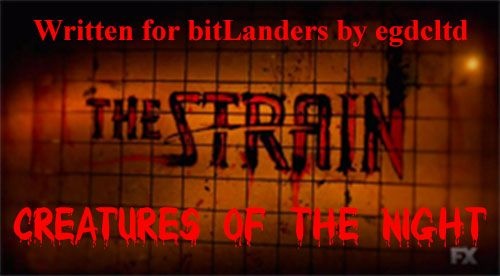 "Creatures of the Night" is episode eight of season one of The Strain, a vampire horror series based on the novels by Guillermo del Toro and Chuck Hogan. In this episode Eph and the others meet Vasiliy whilst looking for UV lamps and get trapped in a petrol station.

Previously on The Strain

In the previous episode, "For Services Rendered", Eph and the others planned to lure Eichorst out into the open using a threat from Jim. Eichorst did turn up at Grand Central Terminal as planned, but that was about the only thing that went to plan. Eichorst accosted Abraham on a subway station and might well have killed him if Eph hadn't shot Eichorst in the leg with a silver bullet, causing him to flee. 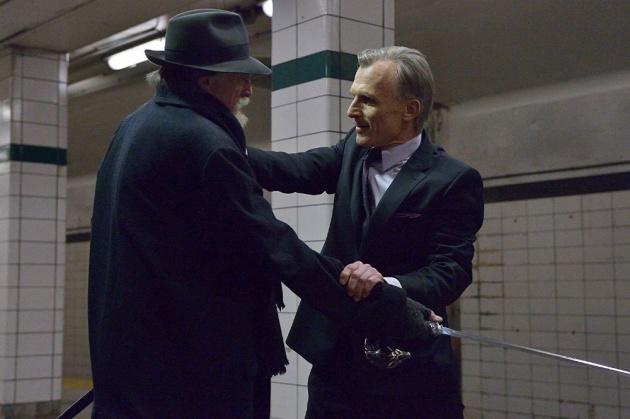 Eichorst is Not Immature

This episode opens immediately afterwards. Abraham is helped to his feet and asked if he's okay. He says that he isn't injured, but they have missed an opportunity. Jim asks how Eichorst was able to move as quickly as he did. Abraham tells him that the other strigoi are immature, still in the early stages of maturity. Eichorst may have been shot in the leg, but it's hard to wound them fatally with a gun.

The Master Will Reply

Still, it will have been a long time since Eichorst felt pain like that, which will have sent the Master a message, and he will find a way of replying. Jim says that doesn't sound good. Nora comments that the tunnels are an ideal place, as they are dank, dark and devoid of sunlight. Eph says that the reason sunlight has an effect is the virus. Viruses do not like ultraviolet light and their die off rate is 90%. Which is why the sun desiccates the strigoi. Jim comments that it's night-time now and New York is an open buffet. So Eph suggests they simulate their own sunlight. Eichorst is limping along a subway tunnel and arrives at a station, jumping onto the platform. Which causes him more pain.

Heading for a Medical Supply Place

Eph and the others arrive at a medical supply place in a taxi, but it's closed. Eph asks where there's another place; Jim says the closest one for UVC is in Bushwood. Presumably not very local. Nora pays the taxi driver and starts asking him to stay, but he speeds off.

Breaking In and Meeting Vasiliy

So they go around the back of the building. When Nora asks if they are burglars now, Eph simply says to add it to the list. Before breaking the window, Eph says wait for the alarm. None goes off, though, and Jim says it must be a silent alarm. Inside, Nora hears a noise but they think it's outside. Except it wasn't, as a man points a gun at them and asks them to say something so he knows they aren't one of them. For the man is Vasiliy. They tell Vasiliy that it's a legitimate medical emergency. He replies that they look like looters. Eph says they are from the CDC and asks who Vasiliy is. He puts his gun away and states he's a looter.

Vasiliy Already Has the UV Lamps

When Jim goes to find the UVC lights they are all gone. Because Vasiliy has already taken them. They ask him what he plans to do with the lights and Vasiliy replies the same thing as them, as sunlight fries them. Which Vasiliy discovered in "Occultation" when he had to kill his boss and Loretta at work, accidentally exposing the man to sunlight. Vasiliy says sunlight means UV and UVC is the strongest form of it. Vasiliy also says he's seen Eph on TV, where he is being portrayed as a dangerous criminal. Eph tells him the cops will be here any minute. However, Vasiliy replies he took out the phone lines at the junction box, so no alarm. Plus, the cops probably have bigger things to worry about. He also asks if there's a reward for turning Eph in. There isn't. 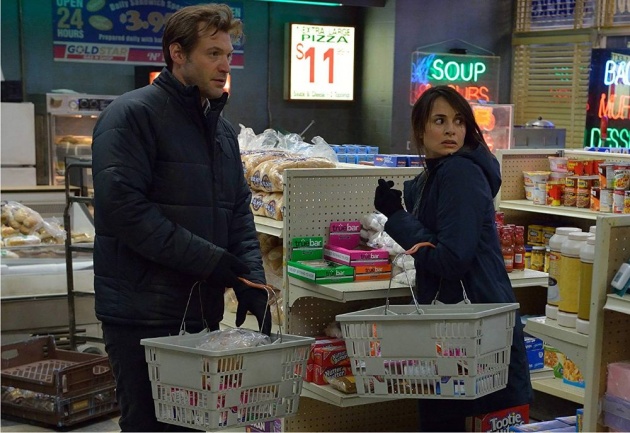 When asked, Vasiliy says he exterminated a couple of the creatures. It's what he does; he's an exterminator for the city. He has twelve lamps and Nora asks him for some of them. Vasiliy offers three and Nora asks for six. Outside, Eph, Jim and Nora head to a petrol station across the street to get supplies including mobile phones for when the networks come back up. Abraham stays with Vasiliy he is loading his van to have a word with him. Vasiliy asks how they got there, and one of the things mentioned is the subway tunnels. Vasiliy tells Abe that the tunnels are where they are, and there must be dozens of them down there. Abraham corrects him, saying that there are thousands he thinks. He also asks Vasiliy if he knows the tunnels well. 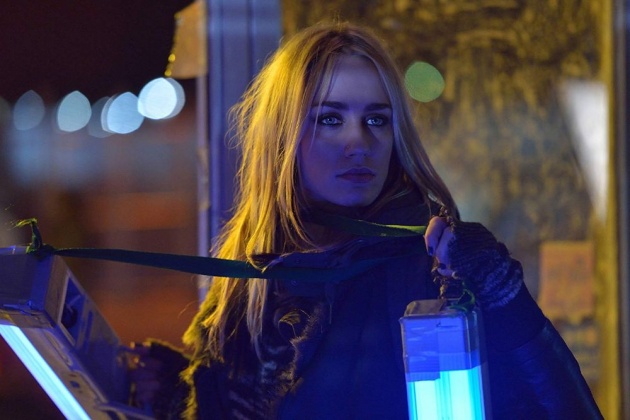 Dutch the Hacker is Also Here

Inside the petrol station one women says to another that she knows her. The second woman is Dutch Velders, the hacker who was hired to take down the networks in "It's Not for Everyone" by Palmer. A very strange coincidence. The first woman asks Dutch what she did and she replies nothing much. Unless you want to use a computer or a phone.

Across the street Abraham is still talking to Vasiliy. Vasiliy calls the vampires rat people. Then Abraham sees one across the street and excuses himself. That vampire scares everyone inside the petrol station when its stinger presses against the glass, but is quickly beheaded by Abraham. Who then takes out another. There are more coming though and Vasiliy hits one on the head a couple of times to kill it. As more approach, Jim plugs in one of the UVC lights, which does work. However, another grazes his cheek with its stinger. That does not bode well for Jim. This seems to be how the transmission is spread, and a slight graze is apparently enough. 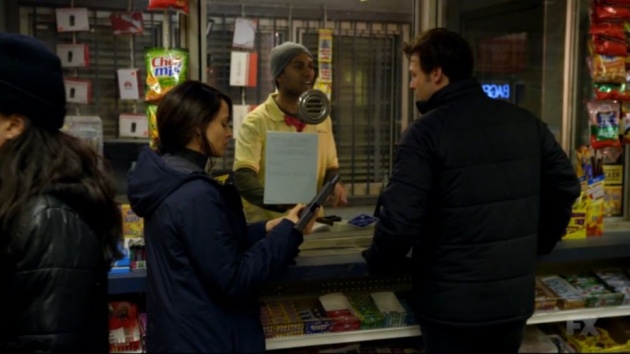 Hiding in the Petrol Station

Everyone retreats inside the shop as more and more vampires appear. The others in the shop are not immediately convinced that it's as bad outside as thought. Jim may well be infected as well - probably is infected. But is it possible to treat him? Vasiliy asks Abraham for details on how to take down the vampires. Professional interest, really, inquiring about Abraham's nail gun and wanting to know if the only modification is silver nails. 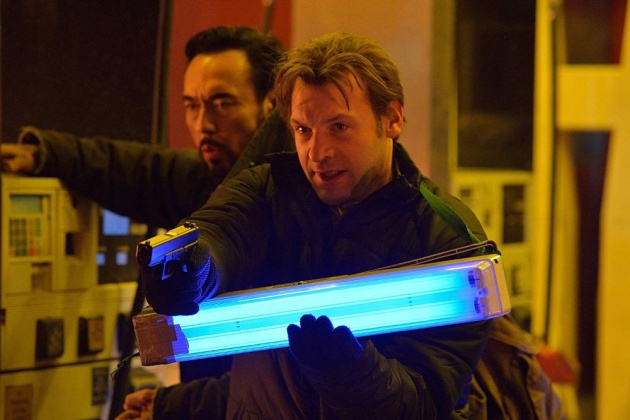 A Zombie Apocalypse - But With Vampires

Most of the episode is spent with everyone trapped inside the petrol station's shop, rather like in a zombie apocalypse where the mindless zombies are outside. Only in this case, the 'zombies' are evolving, becoming faster, more intelligent and more dangerous as time passes. Eventually, and well before daylight, they are going to get in, and probably with a coordinated attack.

The Strain - Creatures of the Night Trailer