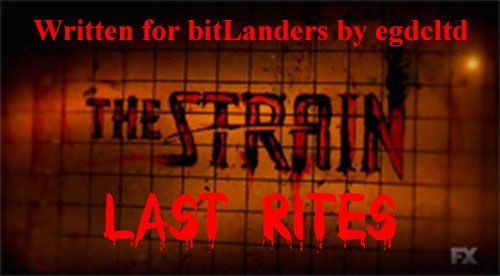 "Last Rites" is episode twelve of season one of The Strain, a vampire horror series based on the novels by Guillermo del Toro and Chuck Hogan. In this episode, vampires attack Abraham's shop and the mysterious other player reappears. 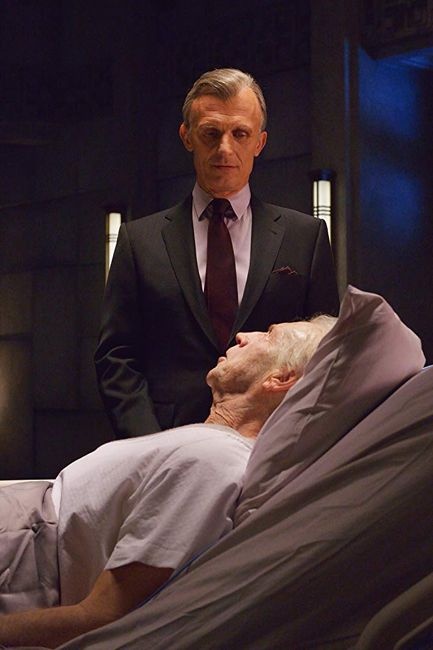 Previously On The Strain...

In the previous episode, "The Third Rail", Eph, Nora, Abraham and Vasiliy had encountered the Master. Briefly. The light bomb drove the Master away, but nothing more, and Abraham wanted to pursue him. It. Through a large nest of vampires. Abraham had to be dragged away by Vasiliy. Eph calls out for Zach and tells his son that he's sorry they didn't come back when he said they would. Zach says that it's okay, and asks if they got him. Eph says no, but they came close. but close doesn't count (it only counts with horseshoes, hand grenades and thermonuclear warheads). Eph asks if everything was okay and Zach replies fine. Eph asks Zach if he's sure and he says yep. Evidently Zach is not going to tell his father that he went out for some cigarettes and encountered at least one vampire. Things might have gone badly - or not - if Gus hadn't shown up.

Abraham heads downstairs and takes the cover of the heart in the jar. He says give me strength, and then thinks back. To Shkodër, Albania, 1967. A much younger Abraham is bargaining with a man, trying to rent his horse, saying he will just take it up the river. Abraham comments eventually that it isn't the price - it's the destination. He asks about the castle, the ruins, and if a well-dressed German who only comes at night has been seen. If there are any people missing from the villages. The man with the horse is unwilling, or afraid, to talk, but he eventually sells Abraham the horse. 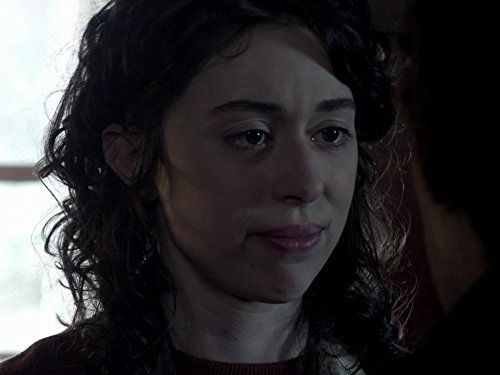 Abraham rides to what would seem to be his home on the horse, and is met by a woman, Miriam, with a crutch. Abraham tells her that they are so close, that he's here, that he knows it. A victory would validate their life's work, avenge the deaths of those who have fallen and shame those who denounced them. Abraham tells Miriam that the castle is a half day's ride away, and he will be back before sundown. Miriam says that if Abraham sees any signs of nesting he should get away. She would prefer he didn't do this alone. He replies that he's never alone, and after all their sacrifices they can settle down in peace. Adopt a boy and a girl, just as Miriam has always wanted.

There May Not Be a Next Time

Nora interrupts Abraham's memories. She says that next time will go better and Abraham asks if she knows how long he has hunted the Master. His last encounter was decades ago, and there may not be a next time. Nora tells him he should rest and Abraham asks her to just leave him alone. Then Nora spots the heart and asks if it's a vampire heart. She has many questions, but Abraham is not in the mood to answer any of them.

A man is locking up a garage and gets into his car. Then Gus appears in the back seat and holds a gun to the man's head, asking if he remembers him. The man is Alonso Cream, who Gus and Felix sold a car to in "It's Not for Everyone". Gus tells Alonso to give him his gun, then start the car and drive. 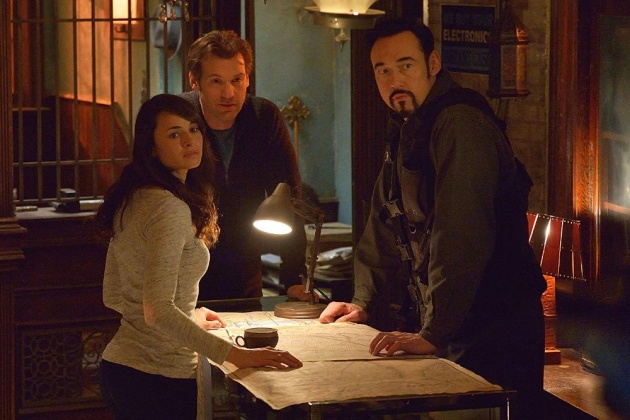 Anyone Else Bothered By Abraham's Actions?

At the pawn shop, Vasiliy is looking at a map and pinpointing where they were when they saw the horde. Eph asks if no-one else is going to bring it up, how Abraham behaved. Vasiliy replies that Abraham was a bit upset; Eph thinks wanting the four of them to take on a thousand vampires is more than upset. Vasiliy says that the old man has been hunting vampires for a long time; Eph asks if they are just going to put it down to a senior moment then. Nora says that she hears what Eph is saying, but what other choice do they have. So, Eph is the only one bothered then.

A noise is heard coming from outside, as Dutch is there, shaking the shop's security grille. She had left in "Loved Ones" after Eph took out some of his grief about Kelly on her. Vasiliy goes to let Dutch in and she asks him if he missed her. It looks like the answer might be yes. Dutch has a bag and Vasiliy asks if there are pizzas are in it. Dutch replies better; she has brought a plan. Eph tells Dutch that they don't need any more plans, they need a win. She replies that she has brought them a win.

Use the Emergency Alert System

As Dutch empties her bag Eph asks who she stole the contents from. Dutch replies that she understands they will never be best mates, but they need her. Eph reminds Dutch that she broke the internet. She asks them if they have ever heard of the Emergency Alert System; Vasiliy replies that it's the thing that interrupts the radio and TV, saying it is only a test. Dutch tells them that they system is designed to allow the president to address the nation during war or national crisis. In 50 years, it has never been used, even on 9/11. Nora says that this is because there is 24 hour news now, to which Vasiliy replies if you can cut through all the noise (gossip and other crud).

Put Eph On Everything

Dutch says that she can cut through the noise. She can put Eph on every radio and every television in the country, unfiltered and uncensored. Eph replies that he's an escaped fugitive who is wanted for murder, and asks who would believe him. Dutch says that he should use that notoriety. People know who Eph is and that he works for the CDC - and Vasiliy mentions Eph using his charm. Probably with an element of sarcasm. Nora says that it could work and Dutch tells her it will. Dutch asks Eph to think about what he could say in 30 to 40 seconds that could wake up the world.

It's a Long Story

Dutch and Vasiliy head up to the roof to set up her equipment. Dutch is going to convince the system that it is just a regular test - then lights, camera and Dr Serious. Vasiliy asks if the stuff they are setting up will do this; apparently not, Dutch is going to bypass the encryption on her laptop. Something she says is an NSA-level hack. Vasiliy asks Dutch how she got started. She replies that it's her long story. But continues. Her father used to work for New York Telephone, tracking phone phreakers. When the telephone monopoly was broken up, he turned to cybersecurity just as the phreakers were becoming hackers.

Vasiliy asks if Dutch turned against her dad and she tells him no, she loves her dad. He went undercover and saw that hackers were more curious than malicious. If her father had been born a few years later, he would probably have become a hacker. Vasiliy points out that what Dutch did to the internet was plenty malicious and she says that she lost her way. He asks Dutch if she came back to fix that and she says yes. Plus she left a really good pair of boots here (and there also seems to be mutual attraction between the two of them). Vasiliy comments that he is pretty good at New York Accents, but he can't place Dutch's. Which is pretty obviously English. Dutch says that her father met a London girl and moved across the ocean for her. When her father died, her mother took it very badly and married too quickly. Things went bad and Dutch left home at 15.

I Need Guns, Ammo and Money

Alonso wants to know why Gus chose him; Gus replies that he needs guns, ammo and money, and he seemed like a safe bet. Alonso tells him that he has friends who want to do him favours, and if Gus steals from him, they will try to get on Alonso's good side by finding Gus. Gus tells him to look around the city; there's a plague turning people into killing machines.

There are more memories of Abraham's from Albania. After he arrives at the castle, he examines a well that has personal possessions at its base. Abraham ties the horse up and drops a rock down the well, which is dry. He takes a rope and backpack, and climbs down. At the bottom, Abraham takes out a torch, helmet with lamp and his sword and goes through a tunnel. Above, it already looks like the sun is setting. Abraham finds a nest of vampires, and one of them looks at him. Then speaks. Only it sounds as if the Master is actually talking through the vampire. It calls Abraham professor, and tells him that the sun is setting and he is so far from home. This is clearly a taunt, and Abraham leaves, thinking of Miriam. When he arrives at the bottom of the well, the rope is gone. And Eichorst is at the top. He tells Abraham that he has been hunting too long, and knew he would not be able to resist such an inviting trap. Even if Abraham gets out of the well, it's doubtful the horse will be there. Or usable. 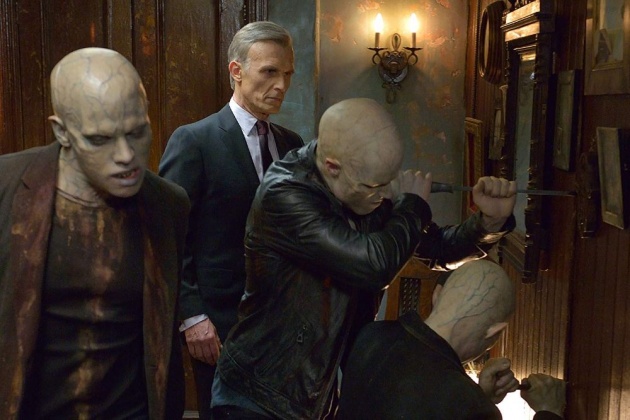 In the present, Eichorst and some other vampires - one of whom is Gabriel, the last of the four plane 'survivors' who hasn't been seen since "Runaways" - attack the shop. Gus stumbles onto something unexpected and disturbing whilst he is with Alonso. And whoever it was that made an appearance at the end of "For Services Rendered" appears again. But nothing more is explained about them. They appear to be hunting vampires, yet they do not appear to be human themselves. Perhaps a sort of 'good' vampire? 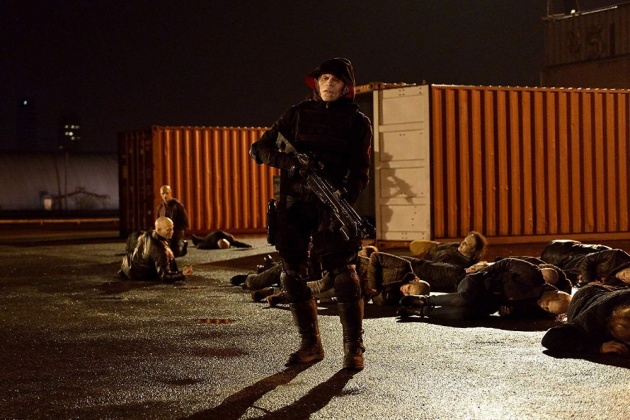